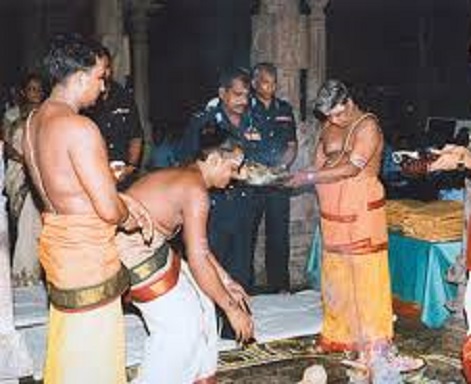 This article was sent to IndiaFacts by Dr. J.K. Bajaj.

It is not surprising therefore that the British were wary of the religious establishment. In the intellectual discourse of India, they instilled a sense of distaste and suspicion for all that is associated with religion. They created the myth that religion is only a matter of personal spirituality or piety, it has nothing to do with polity; and, therefore, all religious organisations, excepting of course the Church and the Umma, are somehow illegitimate. The British also created elaborate bureaucratic and judicial structures to control and demean the religious establishment in diverse ways. During their time, religion indeed became a private affair for most people, and public religious activity got reduced to the minimum.

Following Independence, India has seen a great resurgence of religion. In every part of the country, large numbers of people are seen going on pilgrimages of various kinds. In many cases, these pilgrimages are undertaken on foot; on the roads of India, you often see groups of people walking towards some sacred destination or the other;the British used to be scared of such walking groups of people and of itinerant sadhus. The people of India have also begun to associate themselves in large numbers with diverse mathas, derasand sampradayas.

Many of these sects and sampradayas have an ancient history and a hoary past; many others, like that of Sant Rampal, are new. Many have large funds and endowments from olden times; many have been able to raise resources from the community of their believers; many others are dependent on newer sources of funding, a large part of which may involve foreign and especially NRI moneys. Many have owned vast lands and large structures since historical times; many have recently acquired large tracts of real estate in several parts of the country and have built large structures to cater to their vast following.

The question is: How do we deal with the resurgent Religious Establishment? Do we accord it any legitimacy or sanctity? Do we take it as an activity that strengthens Indian society and its values? Do we treat the leaders of this establishment as important pillars of the society, who are performing a legitimate public service? Or, do we take it, as the British did, as somewhat undesirable public organisations, which have to be tolerated because so many ignorant people are associated with it, but which must be curbed and destroyed with the full might of the state whenever the opportunity offers itself.

The answer of the intellectual, bureaucratic and judicial establishment of India is not difficult to guess. The intellectual establishment continues to be mired in the prejudices of the British times. Its apathy towards the religious establishment is such that our history books at the school level continue to refer to someone of the stature and sanctity of Guru TeghBahadur as some kind of a desperado who dared to disturb the peace and tranquillity of the Mughal state. Given this attitude, it is not surprising that the social scientists of India have largely failed to take note the great religious resurgence that is taking place in the Indian society. Such a large social phenomenon is simply being ignored by the intellectual establishment.

[pullquote]Following Independence, India has seen a great resurgence of religion. In every part of the country, large numbers of people are seen going on pilgrimages of various kinds. [/pullquote]

For the bureaucratic and judicial establishment, which in any case has continued unaltered from the British times, the religious establishment continues to be suspiciously illegitimate. Therefore, whenever someone from this establishment falls into the clutches of law, he or she is shown no more consideration than any common criminal. It is tritely true that the law is equal for all. But, in practice, people in different stations in society have to be always handled differently.

Even the codes of British time specify different procedures for the graduates and non-graduates, for gazetted officers and others, and so on. Several of our laws specify that permission of the governor is required before prosecuting officers at a certain level. So it would not have been all that out-worldly if, for example, the Acharya of Kanchi had been shown greater consideration before and after his arrest on the Diwali eve ten years ago. And it would not have been below the dignity of law, if the situation at Sant Rampal’s Ashram had been allowed to be handled with more patience, tact and courtesy.

I do not know much about Sant Rampal; given the apathy of our intellectuals towards the religious establishment, perhaps nobody knows. In another country, a couple of scholars would have probably done Ph.d.’s on the phenomenon of the rise and growth of this sect. But from what has so far appeared in the media, it is difficult to believe that he is as demonic as is being made out. The media effort to prove him to be such has been largely laughable. I do not want to go into the details.

But the Ashram we are taking about was a city that accommodated some 15 thousand persons; the ‘discoveries’ that the media has highlighted seem hardly odd when placed in that context. The presence of a former Maoist among the 15 thousand is also hardly news. Such people would be there at any place where large numbers gather. But the media is also telling us that the full force of law is being brought to bear on the sect and its head. More than eight hundred of the followers have been arrested. And the cases that have been launched are so numerous that the Sant and the sect would both be finished much before the judicial process reaches any conclusion.

But the hunt has not stopped. The process has moved further to encompass other religious institutions of Punjab and Haryana. The courts have suggested that the deras that abound in both these states, and are known to have served many social and political functions in the past, be kept under regular surveillance. The media has used the opportunity to gleefully malign the whole of the Hindu religious establishment. I cannot dare compare the Kanchi Acharya and Sant Rampal. But during the campaign against Sant Rampal, the media was showing pictures of several revered saints and acharyas of India, starting with the Kanchi Acharya, as if it were some kind of a rogues’ gallery. The impact of the arrest of Kanchi Acharya on loosening of the restraints in public discourse cannot be underestimated.

The case of Sant Rampal and his sect brings to the fore the question of the relationship of modern Indian state with the religious Establishment. To continue to treat the latter as an undesirable form of public mobilisation and activity is not going to take us far. This is one of the important ways in which the Indian society has been organising itself. The phenomenon is not going to disappear; as the society becomes more confident and resourceful, its religious expression is only going to become greater and more diverse. It is time that modern India comes to terms with it. This, first of all, requires granting a certain sense of sanctity and legitimacy to the religious establishment and moderating the expressions our media, bureaucracy and judiciary accordingly.

This also requires a greater intellectual understanding and appreciation of the phenomenon and its antecedents. Our social scientists should engage in studying the great variety of ways in which the Indian society is giving expression to its intrinsic religious impulses and the many organised forms of religious expression that are flourishing today. A detailed and continuous study of the phenomenon shall help in not only forming a better appreciation of what is happening but also in better integration of the religious establishment with other establishments of the society.