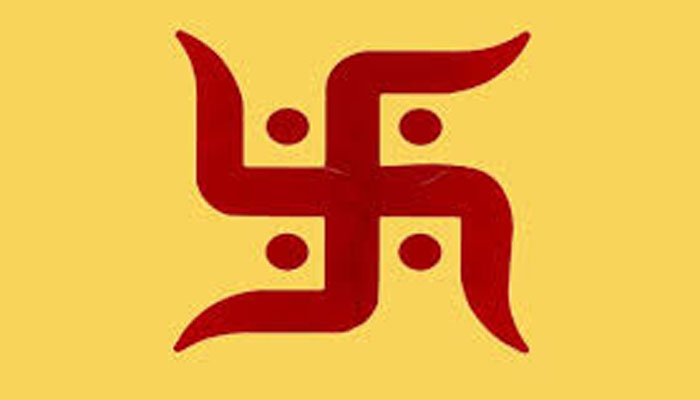 On July 21, the New York Senate passed a bill to amend the education law that would “require New York school children be educated regarding the meaning of Swastikas and nooses as symbols of hatred and intolerance”. According to the bill’s summary, “It is vital for students to be aware of the meanings of the swastika commonly exhibited as the emblem of Nazi Germany – as well as the noose – commonly exhibited as a symbol of racism and intimidation”. (1)

It didn’t occur to the New York Senate that the Swastika may be of religious significance to the over 100,000 Hindu American students in the New York state public education system.  (2) The bill was a classic case of an Abrahamic society airbrushing the highly successful and strongly integrated Hindu American community from the big picture.

It was Simran Tatuskar, the student union president at Brandeis University, who decided to take on the Abrahamic establishment. The 21-year-old Hindu stood up for the truth and proposed including the Swastika as a symbol of peace – and different from the Nazi symbol – in her college curriculum.

However, a Twitter handle ‘StopAntisemitism.org’, which claims to expose antisemitism on social media, attacked Tatuskar, saying she was normalising the “largest symbol of hate in America”. (3) What followed was typical of the intolerance that leftists and seculars are well known for, with left-liberal groups swooping down upon the Hindu student. The Jewish News Syndicate claimed she was trying to “force Jewish students to confront this evil symbol on campus”. (4)

The bullying of the Hindu student is not only the result of ignorance, it is a completely false and blatantly Eurocentric accusation. For, the Swastika is the foremost symbol of the Hindus who have never persecuted Jews but welcomed them as equal citizens of India after the Roman destruction of Israel in 70 CE. In fact, there was a thriving Jewish community in Kochi, Kerala, where they had been living since 700 BCE, around the time of the very first expulsion of Jews from Israel. More tellingly, synagogues in India never had the heavy security that marks synagogues in New York. (5)

It is understandable for Jews to feel fear – and loathing – when they see the Hakenkreuz. But well-informed Jews such as American politician David B Cohen stepped in to defend Tatuskar. He joined the debate with a tweet: “Hindus, Buddhists and Jains should teach us the true meaning of an important symbol of their cultures, and how the Nazis stole and perverted it. India’s one of the only places where the majority never discriminated against Jews.” (6)

Cohen, a prominent Jewish leader, said he knows real antisemitism, and Tatuskar’s comments are not antisemitic. “If a hate group appropriated the Star of David, Jews wouldn’t abandon the symbol. We’d reclaim it and educate others on why it’s important to us. But Jews justifiably have a very strong visceral reaction against the Nazi symbol. So it’s always best to proceed with patience and compassion on these matters.”

In Sanskrit, the word Swastika is a combination of ‘su’ (meaning ‘good’) and ‘asti’ (meaning ‘to exist’). The Swastika is thus a symbol of auspiciousness and good fortune, and is regularly donned on Hindu homes, businesses, printed materials, cars, temples and monasteries.

The Swastika has nothing to do with Adolf Hitler’s Hakenkreuz, which means a hooked or crooked cross because its arms are tilted 45 degrees. In a previous article, I had explained how Hitler adopted the Hakenkreuz as a German national emblem and as the central element in the party flag of the National Socialist Party. By 1945, the symbol had become associated with brutality, racism and genocide. It was an Irish Catholic translator who intentionally mistranslated the Hakenkreuz as Swastika in order to whitewash Christianity’s unholy links with the Nazis and culpability in the murder of six million Jews. (7)

The Swastika was once widely used outside India, and is more European than many people realise. The oldest identified Swastika is in Ukraine on an ivory bird carbon-dated to an astonishing 15,000 years before the present. (8) The Swastika was considered auspicious in ancient Greece, Rome, Mesopotamia, Scandinavia and Scotland, and among Native American nations such as the Navajo.

Until Hitler unleashed the Jewish genocide during World War II, it was used extensively in Europe and the US. “Coca-Cola used it. Carlsberg used it on their beer bottles. The Boy Scouts adopted it and the Girls’ Club of America called their magazine Swastika. They would even send out Swastika badges to their young readers as a prize for selling copies of the magazine,” says author Steven Heller.

The symbol was used by American military units during World War I and it could be seen on RAF planes as late as 1939.

In order to reinstate the Swastika to its former global acceptance, Hindus can use a mix of soft and hard diplomacy:

1. People love history – explain it to them

Students like Tatuskar need to be emulated and encouraged. Whether you are in India or overseas, use the Swastika proudly. If misinformed people comment negatively, use that as an opportunity to explain it to them. Most people will understand your perspective. The bigots can be left to stew in their hatred. Let them suffer watching the rise of India as an economic and military power.

The hateful use of the Nazi Hakenkreuz lasted less than two decades of official usage in Hitler’s Germany whereas the auspicious use of the Swastika is at least 15,000 years old. So the weight of history is on the side of the Hindus; the Western leftist media and academia cannot keep up their lies ad infinitum.

“We Hindus, Buddhists and Jains must become ambassadors for the Swastika, educating ourselves about our tradition so that we can educate others about how we use the Swastika. And we must be vocal about it, while also being sensitive to when and how we speak up,” writes Mat McDermott, senior director of the Hindu American Foundation. (9)

“We also mustn’t shy away from using the Swastika in the West in our traditional ways. If we are challenged in doing this, we must be willing to engage constructively and in an educational way. Most of the time, opposition to traditional Swastikas is likely done out of reactive ignorance. We must help remove this ignorance. These conversations will be difficult at first but they must be had.”

2. Make it illegal to tar the Swastika

Currently, Google Translate has accepted the Swastika as the literal translation of the Hakenkreuz. If Parliament passes a law that bans equating the Hakenkreuz with the Swastika, then Google will have to make the change on Google Translate – at least for its India specific site. It’ll be a start – once Google makes the change for the large Indian market, it would be a fait accompli as the change will be quickly mainstreamed in all of Google. Also, if the company’s CEO Sundar Pichai wants to pump $10 billion into India, surely India has some leverage, considering the vast market that Google is tapping into.

4. Bring Jews on board

Jews and Hindus are natural allies as their common enemy is fundamentalist Islamic regimes and evangelistic Christianity.

In 2008, the second Hindu-Jewish leadership summit took place in Jerusalem. The summit issued the following declaration, recognising the importance and positive intent of Hindus using the ancient Hindu symbol:

“Swastika is an ancient and greatly auspicious symbol of the Hindu tradition. It is inscribed on Hindu temples, ritual altars, entrances and even account books. A distorted version of this sacred symbol was misappropriated by the Third Reich in Germany and abused as an emblem under which heinous crimes were perpetrated against humanity, particularly the Jewish people. The participants recognise that this symbol is, and has been sacred to Hindus for millennia, long before its misappropriation.” (10)

Dialogue is important. Don’t forget that India’s economic clout and growing military strength are the key factors why the world wants to be pro-India. Money talks in a language all nations understand. The world is prepared to listen to India, but first Indians should get their script ready to convince the world that what was stolen from India should be returned.

I once visited the home of a Christian bigot in New Zealand. His bigotry ran so deep that he used two beautiful Buddha statues as the ends of a shoe rack on the floor of his home’s entrance foyer. And guess what, within a few years his dream home was repossessed by the bank. The misfortune that befell this man may have been due to some other cause, but who knows, did it happen because he abused an ancient symbol?

While the Swastika is benign to those who value its importance, it may well bring misfortune to those who misuse it. Says author Rohit Arya: “The Hakenkreuz takes the protective energy and perverts it into a tool of destruction. It is a sigil but a wicked one, a diabolical construct. Yogis all over India used to react with shock when they first saw the Nazi symbol; for they knew this would bring about a catastrophe. It unleashes demonic energy, which was why the Blitzkrieg was so successful at first. But then it begins to devour its user. Germany was literally reduced to rubble. Not one house was left standing in the cities. It was the ruin of a scale and scope that only the Mongols had managed before.” (11)

Considering the havoc that the misuse of an auspicious symbol has caused, India must educate the world about using the Swastika in the right way to ensure global peace and prosperity.