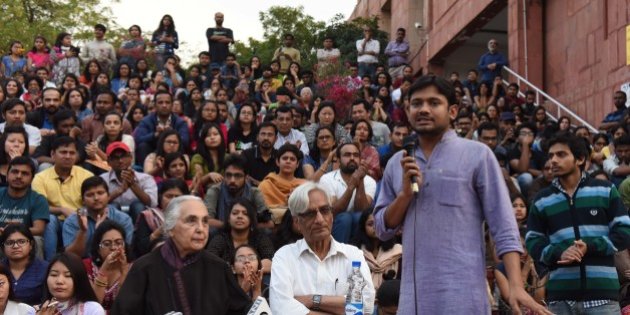 Indian intellectuals are acutely aware of their growing irrelevance in contemporary times, not just because the present political dispensation does not recognize their birth-right of representing others, but also due to their own sinking realization that ordinary folks no longer believe in them. In desperation to remain relevant so as to engineer a proletarian utopia, they go beyond interpreting the world for the people; they prescribe the world and construct a reality which has no material foundation. In the process of creating this world of make-belief, they mock the values of millions of people as in various articulations around Sabarimala issue or nationalism that are dear to the people on the street. To what extent is intellectual outrage reflective of public angst? Do their outbursts help democracy and citizenship or do they create new hierarchies where peddlers of intellect impose their world-view on a people they neither respect nor understand?

The language of an engaged intellectual, particularly those affiliated to various faculties of universities, got institutionalized in the students’ protest in Paris in 1960s when professors like Foucault took active part. We all know that this protest ended in smoke and Charles de Gulle won the next election with a bigger majority. This was just like the French Revolution which had brought Napoleon to power. It should not surprise us that the Indian intellectual vocabulary is derivative, the reason why our university professors thought it must be a good thing to mobilize students as Foucault did in Paris. If we go back in time, we can see that the vocabulary of our intellectuals was a gift of Lenin that had started percolating to India after Bolshevik revolution in 1917. One of the reasons why nationalism is a bad word for Indian intellectuals is because of nationalism’s association with violence and war in 20th century Europe. As if we should stop using swastika symbol just because the Nazis appropriated it.

The Communist Party of India, which was a part of Communist Internationale, had been founded by MN Roy who in 1915 went abroad in search of German arms. Germans did not deliver on their promise and Roy went to China, then Soviet Union and became a side-kick of Lenin. Later he was castigated for embezzling Russian money for starting a revolution in India. In his book, India in Transition he saw 1857 as a reactionary event and believed that only Western educated denationalized Indians can rescue India. He also argued that Gandhi’s non-cooperation movement was exploiting Indian masses. Roy will be expelled later in 1929 from Communist Internationale for counter revolutionary crimes. What I am arguing is that far from being a challenge to power, Left intellectual language was a product of power that worked against national interest. Later it would become the language of privilege, legitimacy etc. so much so that it will become a career and profession.

What the contemporary intellectuals take for granted is their privilege and their immunity from any kind of persecution, which robs the heroic halo the intellectuals imagine themselves to be possessing. Safety and security of living in a vibrant democracy as well as an activist judiciary and a collaborative media give them the opportunity and visibility so that their noises can be heard. That is to say, intellectuals were meant for a heroic age where truth telling invited real danger and oblivion, and the difference between the powerful and the powerless was real, whereas today truth-telling is a globally acknowledged self-perpetuating industry that enjoys power and privilege. At a time when news-papers and news channels are pervasive and the reality of social media is ubiquitous that can make stars out of vagabonds, there is no difference between fame and infamy (popularized in a Hindi song “jabse me jarasa badnam hogaya, ram kasam mera bada naam hogaya”). It does not involve an iota of risk in being an intellectual, and speaking truth to power is immensely rewarding.

In an environment when oppression and subordination are less visible, it is an expression of power to speak intellectually. In the world dominated by images and representation, we are faced with a situation where real does not produce representation; it is the other way around thereby leading to a crisis of authenticity. Given that real Hitler is a thing of the past and his ways of dealing with Jews is impossible in India, intellectuals imagine Modi as Hitler and instead of Mussolini they confront Mohan Bhagwat. Thus one of our most honorable men Partha Chatterjee compared Indian Army Chief Bipin Rawat with General Dyer, the perpetrator of Jalianawala Bagh. This to my mind is the greatest disservice to democracy and a mockery of common citizen’s judgment to create his own world. The intellectuals however imagine themselves to be living in Hitler’s Germany, while enjoying comfortable life with huge salary and little responsibility. Today’s problem is not intellectual deficit, but intellectual overkill.