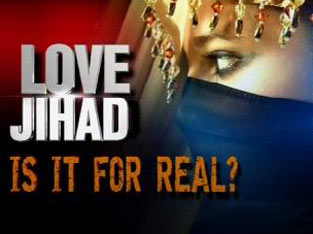 When liberals and intellectuals do not see what they like to see, they don’t come to terms with the objective reality; they blindfold themselves. So, unsurprisingly, our media moguls and talking heads and top academics these days are trying hard to deny the existence of ‘love jihad. (LJ)’ For them, this is nothing but the Hindu communalists, emboldened that Narendra Modi is now the Prime Minister, working on the hate agenda.

While top editors in news channels and papers are busy denying or downplaying the phenomenon of LJ, prominent scholars are obfuscating the issue. In an interview to The Times Of India (August 31), historian Charu Gupta said that the campaign against LJ “will create bigger, deeper communal problems than ever before.” Making unsuspecting non-Muslim girls about the dangers of a hideous campaign will create problems—and, apparently, letting jihadist groups carry out their nefarious designs will not!

And then come the typical red herrings and deliberate deviations from the real issue: “A woman deciding on her own love life or marriage is always seen as a threat in patriarchal societies. It is easier to attribute a woman’s choice to sinister communal designs than her own free will. There is a lot of anxiety about women exerting their intimate religious rights. It makes it seem as though male authority is slipping.”

Woman’s choice? Is it always the real choice, arrived at after going through all the pros and cons? Is she afforded all the information about Islam? Rarely, if ever. In schools and universities, we are fed with misinformation; worse, we are never told about the misogyny that is ingrained in Islam.

It can be argued that there is an element of misogyny in other faiths as well but all religions, except Islam, have evolved over the centuries. The Christianity of the thirteenth century, with its witch-burning and Inquisition, is not the same as it is today. Islam remains very much the same as it was a thousand years ago. For instance, in Hindu and Christian societies, polygamy is legally prohibited and socially opprobrious; the same cannot be said about Muslim societies.

This is not to say that nobody should be allowed to become a Muslim. In a genuine democracy, the individual should have the right to choose his or her religion. But, at the same time, it is the duty of the state—especially the Indian state, which claims to be doing so many things under the rubric of ‘social obligations’—to inform the prospective convert about the faith he or she wants to embrace.

Compare this with the launch of an initial public offering or IPO. When a company goes public, it has to highlight all the risk factors; government ensures that it is done. So, in the event of the life-transforming decision of religious conversion, isn’t it obligatory on the part of the state to inform the decision-maker about the possible pitfalls? The potential Christian convert should be informed about the awful things the Inquisition did. Similarly, somebody wanting to become a Muslim should know how Islamic scriptures inspire Islamist terror; women especially should be informed how their position will be doctrinally inferior.

However, editors and professors refuse to see the writing on the wall for the simple reason it is fashionable to turn a blind eye to Islamic fundamentalism and jihadist terror. They conveniently heap all the blame on ‘Hindu fundamentalists’ and ‘communalists.’ This is despite the fact that many non-‘communal’ sources have also talked about LJ.

Former Kerala chief minister V.S. Achuthanandan said in July 2010 that Muslim fundamentalists in the state were trying to increase their clout by encouraging conversions. “They also persuade them [Muslim youth] to marry Hindu girls.” A leader of the Communist Party of India (Marxist), Achuthanandan is ipso facto ‘secular.’ Earlier, the Kerala High Court had found indications of “forceful” religious conversions under the garb of “love” in the state, and asked the government to consider enacting a law to prohibit such “deceptive” acts, the Economic Times reported (December 10, 2009). It quoted the HC as saying, “Under the pretext of love, there cannot be any compulsive, deceptive conversion.”

Then there are the statements by Hindu and Christian leaders that the girls from their communities were being lured and/or forcibly converted to Islam. Yet, our intellectuals refuse to see the truth. In my book How India’s Intellectuals Spread Lies, I wrote, “Dhritrashtra was blind not only literally but also figuratively: he could not see the evil deeds of his sons Duryodhana and Duhshashana. But Gandhari’s blindness was no less profound: she chose not to see the misdemeanors of her sons. The liberals and intellectuals of our age are the descendants of Gandhari because they choose not to see evil, wherever and in whichever form it may exist.”

On the LJ issue, intellectuals persist with the practice initiated by their spiritual forebears.