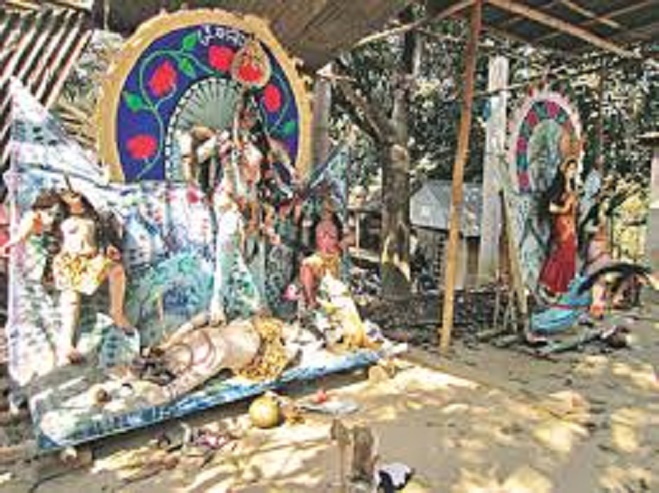 We have seen how the ACRPR Project is full of famous anti-Hindus; how the Project suspiciously targets India; how the Report writers manipulate and even manufacture evidence; how they racially profile the Hindus and glorify Islamic terrorists.

In this article, we will discuss the recommendations of the Panel, recommendations which are no less radical and are equally ill-disposed towards the entire Hindu community.

The goal of the Project is stated as ‘defining a framework of priorities and protocols for a national mechanism for justice and accountability.’ (p. 4). It is considered that this national mechanism, whatever it is, is necessary for the well-being of India. (p. 5) We have already seen how the Hindus are racially profiled by the Project.

We must now dig a little deeper into the recommendations of the Project Report in order to find out what the authors mean by a national mechanism. The Project is unhappy that the Indian justice system punishes just the ‘individual perpetrators.’ One wonders who else it’s supposed to punish? The whole community?

“Often the focus is on prosecuting individual perpetrators while dominant and majoritarian perpetrator collectives are not held responsible or organizing and inciting violence.” (p. 27)

Mark those words. ‘Dominant and majoritarian collectives’. In other words, the entire majority community meaning all Hindus. The Panel of ACRPR actually wants the entire Hindu community to be punished for the crimes of a few individuals. The racist recommendations of the Panel do not stop at this.

For the authors of the Report, justice is not enough. It should be ‘transformative’, ‘transitional’ and ‘reparatory’. The reason that all this jargon is employed to provide justice with an adjective is that the authors favor ideology over justice; they want justice to become subservient to ideology, to become its handmaid, a tool in the hands of the ideologues. There is an effort to combine justice and activism.

This reminds one of the ‘revolutionary justice’ of the Soviets in the heydays of Communism. For the Communists too, justice was not enough. It had to be revolutionary.

Alexander Solzhenitsyn describes that there were two major categories of criminals in the Soviet Gulags under Communist rule. On one hand there were real criminals like murderers, rapists, arsonists, and other common criminals. They were considered less dangerous and less evil. The other category was that of ‘political criminals’. They were jailed simply because they opposed the communists. And they were considered much more dangerous and evil than common criminals.

In the case of ACRPR and India, one wonders whether the Report authors imply something on the lines of categorizing the Hindus as ‘political criminals’ as part of their plan for ‘formation of national mechanisms’. If the law itself starts discriminating on the basis of an ideological pattern, then it stops being law, it stops dispensing justice. Then it just becomes a kangaroo court, functioning as the arm of the reigning ideology.

The authors of the Report show no qualms in writing these ominous words. ‘Transformative justice’ focused on constructively and critically engaging structural and historical factors’ should extend beyond ‘criminal justice system’.

The Report makes it clear again and again that it wants to subvert the Indian judicial system. It says that ‘legal justice’ is not enough. (p. 66). The aims of bringing about this justice are achieved “through the establishment of “extrajudicial commissions of inquiry” and include measures to preserve archives that help to tell the broader story.” (p. 70)

By bringing in ‘transitional’ and ‘transformative justice’ they say that the state should take steps to remedy “historical and structural wrongs rather than law and order problems that may be remedied through increasing securitization”. (p. 228)

What they are actually saying is that the crimes of the forefathers of a community should be visited upon their descendants. By the fag end of the report, the authors start sounding genocidal against the Hindus. The ACRPR Report is a racist plea to punish Hindus for being Hindus.

One may also ask how far in history should we go in remedying the ‘historical wrongs’? Why not ask monetary compensation for the fiscal, social, political and psychological damage that the British did to India? And why not go even further back? Why not ask the Islamic countries and organizations of today like OIC (Organization of Islamic countries) or Saudi Arabia to pay for what the Islamic armies did to India for hundreds upon hundreds of years?

How would the authors feel about that?

The fact that the authors consider that only Hindus should be held accountable for the real and imagined crimes of their forefathers proves that they are nothing more than Hinduphobic racists.

One method that the authors recommend for correcting the ‘historical wrongs’ done to the Muslims by the Hindus to bring in ‘transformative and reparatory justice’ is ‘memorialization’.

Memorialization means making the story of the suffering of Muslims made ‘popular’ by teaching them in schools, colleges, universities and making memorials to them on public squares all over the country.

Another recommendation is that the Hindus pay compensation to Muslims for the ‘historical and present day conflict and upheaval’. (p. 254)

They further recommend that the ‘communal responsibility’ of the majority community, the Hindus should be defined. (p. 260)

The authors of ACRPR call for foreign intervention in the communal affairs of India, for creating a ‘national mechanism’ to punish the Hindus.

“States that transition from authoritarian regimes to democracies often generate, or are willed by the international community to generate transitional justice mechanisms.” (p. 30)

Going by the truth-bending and evidence-manufacturing ways of the authors, this manufactured, Hinduphobic ‘truth’ will be plastered all over India, if the authors have their way. This ‘truth’ will contain lurid horror stories of how evil Hindu monsters rape and mutilate Muslim women just out of habit; of how the Indian Army rapes and buries Muslims in mass graves; how good Christian Samaritans are burned alive by evil Hindus and so forth…

The plea in this ‘memorialization’ is to institutionalize Hinduphobia even more than it already is. The plea is to make the Indian State and Judiciary the primary tools of spreading anti-Hindu propaganda. The plea is to make the State a party in the falsification of history, a falsification in which the Hindus will be demonized as monsters, rapists and murderers and in which the Muslims will always be the victims.

These in short are the recommendations of the ACRPR Project Report. The recommendations are Hinduphobic. Hindus are demonized and racially profiled in the report and a case is made for the prosecution and punishing of the entire Hindu community for the real and imagined crimes of the past and present. So radical are ACRPR’s recommendations that any attempt to implement these fascist diktats would lead to large scale riots between different communities in India.

The Report also makes a plea for the direct intervention of Western powers in the internal affairs of India and to end Indian sovereignty. They recommend subverting the Indian justice system and to ‘realign the parameters of truth’.

The Project is a sinister attempt to undermine Indian sovereignty and foment massive communal riots in India, leading to much bloodshed.