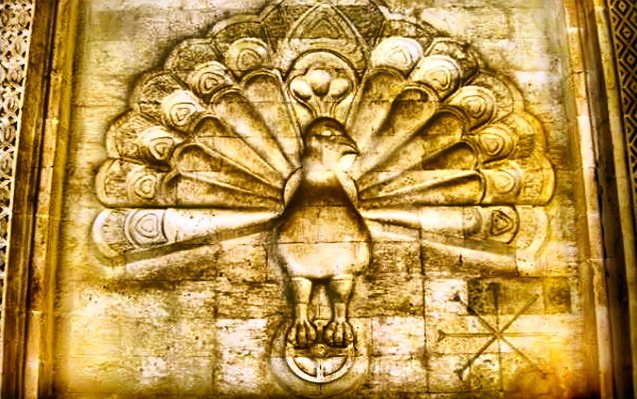 The Yazidi community are a Ezidiki speaking people who live primarily in northern Iraq, and they refer to themselves as the People of the Peacock Angel. They have a rich spiritual tradition and believe in peaceful coexistence. However for a very long time, they have faced persecution by Muslims who consider their God to be Satan. They have faced numerous genocides, the latest being at the hands of the Islamic terrorist group ISIS.

In an exclusive interview with IndiaFacts, Mr. Mirza Ismail, spoke to us about the history and culture of Yazidi community and their plight under the dreaded Islamic state.

Mr. Mirza Ismail is a Yazidi religious Sheikh and the founder of Yezidi Human Rights Organization International, who has been fighting for the cause of Yazidis worldwide for over 20 years. He is a native born Yazidi who was forced to flee Iraq by Saddam Hussein’s regime in 1991. He currently resides in Canada and has spoken about the community in Canadian parliament and in many international forum. As a Sheikh, he is highly respected and has enormous following in the global Yazidi community.

The Yazidis are an ancient and proud people of the Sumerian; the birthplace of the civilizations in the Middle East, its history goes back more than 6000 years and presently part of it is called Iraq.  The Yazidis are also called the Sun civilization.

Traditionally, Yazidi women wear very colorful long dresses and blouses with a traditional headcover as the ancient Sumerian women wore, Yazidis are keeping ancient Sumerian culture alive as our ancient history roots. Yazidi Men also wear long dresses and short sleeve shirts that is made by hands from sheep wools and older man wear hats that also made by hands from lambs’ wools and during winter months men wear long coats, which were also made from lamb skins.

FOOD: Bulgur (cracked wheat) and rice are essential food for Yazidis. The Yazidis diet includes a wide variety of fruits and vegetables. Cucumbers, tomatoes, onions are especially common. In the mountainous areas where grapes are grown, raisins and grape jam are common. The usual beverages are coffee and tea. Yazidis specialties include a type of fried dough in sheep oil with sheep and goat yogurt, cheese and eggs are eaten for breakfast.

The Yazidi religious beliefs are based on five Natural elements and humanity, the unseen element, which is the Supreme Creator (God), and four main natural elements, which are the Sun, Mother Earth, Wind/Air and Water and when helping others, whether you help human or animals do not ask where are they from?  who are they? What are they? Etc.

The Yazidi individuals or as groups are free, it is individual’s rights what to be or how to be as long as they can peacefully live with others.  But when they leave the Yazidi religion at his/her free will then they not welcome back into the Yazidi religion.  The similarity between the Yazidis and Hindus are both faiths are mostly based on nature such as mother earth, air, fire/sun, water.

Our temples are somehow same, when entering temples, both cultures (Yazidis and Hindus) enter bare foot, neither of us impose our culture, language, ethnic, etc. on others.

Prior to the ISIS attack on the Yazidis; the Yazidis faced 73 genocides, all by barbaric ideologies Islamic sharia.  All of those attacks were very brutal, I heard from my grandfather, who was the survivor of the Yazidi genocide by the Ottoman in 1914 – 1918; the Armenian genocide and Yazidi genocide were at the same time by the Turks and Kurds; the Yazidis lost more than 5,000.000 in Turkey, my grandfather was telling us that the Ottoman militias would bet on pregnant Yazidi women if the unborn baby was girl or boy then a militia would cut the stomach of that woman to see who won.  So, many Yazidis were seeking refuge in former Soviet Union, Syria and Iraq, where my grandfather ended in Shingal region, the strong Yazidi-hold before Iraq became a state.

The Yazidis are targeted by Muslims because of our religion, which is based on Nature and Islam has no respect for the nature.  So, the Yazidis are considered “Infidels” by the Islamic Sharia law.  The Yazidis are also considered people without holy book like “Quran, Bible or Torah” and therefore, they (Muslims) are encouraged to commit genocides against the us (Yazidis).

The ISIS entered Iraq in early June of 2014 and took control of the most of the Sunni region such as Mosul, Anbar, Salahuddin provinces. Then Kurdistan Regional Government (KRG) authorities started collecting Yazidis’ weapons in Shingal region, the KRG also collected Assyrian weapons too in the Nineveh Plain.  So, the ISIS attack against the Yazidis was pre-planned by the KRG, Saudi Arabia, Qatar, Turkey and International community as well.  In mid-July of 2014, I with some colleagues met with the US State Department and explained to them that we would face attacks by ISIS very soon and asked for help; but the State Department assured us that the KRG would protect us and will not leave us behind, but we knew that the Kurds would never protect us because of their past attacks and betrayal on us (Yazidis).

Nevertheless, the ISIS attacked the Yazidis in Shingal region on August 3, 2014 at around 2 o’clock in the morning, many Yazidis tried hard to flee to Mount Shingal for safety, but the KRG did not allow them, the Yazidis asked KRG authorities for weapons, so that they can fight against ISIS and protect their families and region, but the KRG refused to give Yazidis any weapons, but in facts the KRG militias killed many Yazidis, those who asked for weapons.  The ISIS arrived in Yazidi region of Southern side of Mount Shingal and the KRG militias left the region in silences, this was a pre-planned plot of the Yazidi genocide.   Some of the Yazidis hid some of their light weapons such as AK 47 rifles and started fighting against ISIS, so the women, children and elder people can flee to Mountain for safety, but in a short time the Yazidis ran out of ammo and ISIS entered Yazidis villages, killed thousands including beheading of hundreds, and abducted more than 7000 mostly women and children, while the ISIS would kill Yazidi men on spots. Hundreds of thousands reached the Mountain in a very hot summer (August) with out food and water; therefore, hundreds of children and elders past away of starvation and dehydration, it was a tragedy that no human could explain in words. It took the international community more than a week to response to the Yazidis crises in Mount Shingal.

As Hindus and with same experiences of genocide at the brutal hands of radicals and extremist Islamic groups; at personal level, individuals can make donations at their capability level send it to those Yazidis in urgent need of humanitarian aid; at societal level, Indian companies and Organization such as Sewa International can work with the Yazidi NGOs such as Yazidi Human Rights Organization – International, Yazidi Human Rights Organization in Iraq and Yazidi International which is based in the US; send  medicines, provide funds for Educations in Yazidi region and Mount Shingal in particular, provide social psycho help to those escaped Yazidi sisters and children, who faced so much in captivity by ill-treatments of brutal ISIS and support Yazidi patients to get their surgeries done in India, which cannot be done in Iraq.

At the Governmental level, India is still run by its indigenous people and know how it is look like to be under genocide; Indian government can support Yazidi case at International Criminal Court, Indian Ambassador to UN can be our voice in the UN and ask for immediate actions to be taken by UN such bring those perpetrators and their supporters to justice; for long term, Indian government can support an “Creation of Autonomous Ezidikhan Region” while no one tried to prevent the genocide against the Yazidis.  India is a developed country with a strong economy, India can save and protect the Yazidis by providing peacekeeping in Yazidi region.  India saved Zoroastrians and Jews in the past, and India now can save the Yazidis too.