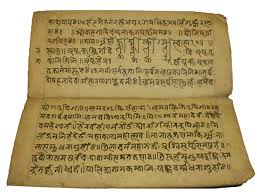 Recently, IndiaFacts came across a video which shows a Muslim scholar reciting verses from the ‘Upanishads’ to a large audience emphasizing how the ‘Upanishads’ speak of a ‘Formless Godhead’. He then adds how these verses uphold Islamic monotheism and concludes with the statement that ‘Brahman is Allah’, so it is wrong for Hindus to go on worshiping idols and images.

While we do welcome scholars of non-Hindu—specifically the Abrahamic—faiths acquiring knowledge of Sanskrit since it will help them understand the basic tenets of Hinduism, we are not at all on board with the cause these scholars pursue—that is, to glorify their own faith by undermining Hinduism. Moreover, as the scholar in the video clearly displays, many of these individuals do not have a proper understanding of Sanskrit . This makes his entire presentation on the Upanishads nothing more than a distortion.

The primary assertion made by these so-called scholars to validate their deprecation of Hinduism is that they are in reality ‘educating’ the Hindu masses about the true nature of their religion. But one cannot be a teacher/guide if his/her knowledge on the subject is inadequate. What is more disturbing is the purpose of the scholars in learning Sanskrit: to convert followers of Hinduism to their faith—in this case, Islam.

This trend is not limited to Muslims only. Many Evangelical missionaries involved in conversion activities among the Muslims used a similar method. They would start by translating the Bible to Arabic and read it out to the Muslim populace showing how Bible contains the name of all the Prophets the Muslims revere and how the basis of Islam can be found in the Biblical verses, the most important one being reverence for Jesus (termed Isa in the Quran). Then finally the conclusion would be reached that Islam is nothing more than deviation of Christianity, so the Muslims should come back to the original fold.

When such an incident happened around 20 November 2011, the man in question Pastor C M Khanna from the All Saints Church in Srinagar was arrested by Jammu and Kashmir police based on charges of “Forced conversions’ following the reprimand from Mufti Bashir-ud-din, who is appointed as the Grand Mufti by the Jammu and Kashmir government.

The Hindu Scholars are a tolerant lot and have never done something that drastic as the Mufti. However it is important to counter false assertions like ‘‘Brahman is Allah’ made by the aforementioned ‘Muslim Scholars.’

Firstly the meaning of the term ‘Brahman’ should be clarified to avoid further confusion. It does not mean ‘Supreme Godhead’ as the so-called scholar suggests. The standard Sanskrit-English dictionary of Monier Williams defines Brahman as:

In the video the scholar went on to speak of the primary verses regarding Brahman, what he meant were the Mahavakyas or ‘The Great Sayings’ of the Upanishads. Three key verses are below:

1.Sarvam Khalvidam Brahma— All of this is Brahma.

3.      Tat tvam asi— Atmana (Self) is the same as Brahma. Therefore thou art also Brahma.

It can be underscored from the Mahavakyas that Hindus are not “committing any mistake by carrying out idol-worship.” It would be instructive to examine what Swami Vivekananda said in this regard:

But in Islam ‘Allah’ is supposed to be a formless all-powerful male deity.From Surat Al-Hashr (verses 22-24) of the Quran:

22. Allah is He, Beside Whom there is no other deity; – Who knows (all things) both secret and open; He, Most Gracious, Most Merciful.

23. Allah is He, Beside Whom there is no other god;- the Sovereign, the Holy One, the Source of Peace (and Perfection), the Guardian of Faith, the Preserver of Safety, the Exalted in Might, the Irresistible, the Supreme: Glory to God! (High is He) above the partners they attribute to Him.

24. He is Allah, the Creator, the Evolver, the Bestower of Forms . To Him belong the Most Beautiful Names: whatever is in the heavens and on earth, doth declare His Praises and Glory: and He is the Exalted in Might, the Wise.

Interestingly, even though Allah, the “formless,” has no gender, He is always addressed as “He.”

A reading of the aforementioned quotations of the Upanishads and Quran makes it clear that Brahman and Allah are as similar as chalk and cheese. If the speaker had understood the correct meaning, then he could have uttered ‘I am Allah.’ But such an utterance is considered profanity in Islam, punishable by death as Mansur Al-Hallaj learnt by being executed in public.

Islam’s fundamental nature lies in its followers’ absolute deference of to the sayings of Allah (as narrated in the Quran). On the other hand, the core doctrine of the Upanishads speaks of ‘Spiritual oneness of the worldly and divine.

The followers of Islam are more than welcome to learn Sanskrit and study the Upanishads but they shouldn’t do so to distort its teachings and in the process belittle Hinduism. That would be like someone learning a foreign language only to abuse its native speakers. It is equally important for young Hindus to learn basic Sanskrit to counter such distortions.