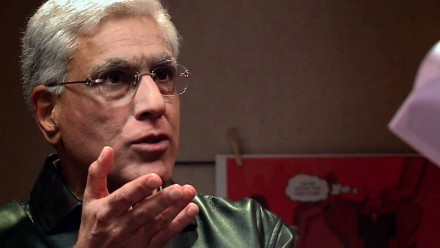 On 27 September, eminent journalist and anchor Karan Thapar penned an op-ed in the Hindustan Times where he slyly proclaimed to offer a ‘bit of gratuitous but well-meant advice’ to Prime Minister Narendra Modi on the event of the latter’s visit to the United States. Mr Thapar may have mistaken spoof for advice, as this piece is nothing more than a terrible attempt to sound humorous.

Here is the crux of Thapar’s “advice”:

If Mr Modi wants to bring large cheesy grins to Yankee faces I suggest he loudly, publicly and, preferably, repeatedly praise the things they’re most proud of. Americans would love that and find it irresistible. But I don’t mean Nasa, Microsoft or old George Washington. No, not even democracy, human rights and entrepreneurship. That’s to be taken for granted.

I mean the more meaningful things that comprise America’s contribution to civilisation, as they know it.….To start with Coke. Yanks put it on par with French wine and the British pint…However, he mustn’t stop at Coca-Cola. The discerning Yank would think that’s a bit obvious and Mr Modi’s love of Americana shallow. To prove he’s really au fait with America’s gastronomic contribution to the twentieth century, our PM must move quickly to praise peanut butter…..Mr. Modi must say he likes the crunchy variety and, preferably, made by either Planters or Skippy. More importantly, he must say he likes it with jelly….But if Mr Modi wants to go the whole hog – pardon the expression but I intend no comparison – he needs to praise one thing more….This could be the juicy, beefy, 16-oz Yankee steak but, perhaps, Mr Modi might find that a little difficult to swallow.

So let me suggest a perfectly acceptable vegetarian alternative which, additionally, is as American as the Stars and Stripes……Pumpkin pie! Outside Yankeedoodle-land few have heard of it and none would want to taste it…..But if Mr Modi wants to show-off his love for his new allies — and that can’t hurt — let him, at suitable intervals, drop into his conversation how he can’t resist Reeces, Fig Newtons, pretzels and bagels. They’ll believe him because he has the figure to prove it!

It’s clear from this that the article was written with the intention of poking crass form of fun at the teetotaler and vegetarian Prime Minister. I had to suppress my sniggers at this piece, not for its hackneyed style—sure, making such jokes on our vegetarian/teetotaller friends is routine—but at the very obvious and very mulish intent of Mr. Thapar who thinks every form of impropriety against PM Modi is kosher.

About a month ago, in another of his gems on HT, Mr Thapar was questioning the Modi Government’s firm and proper decision to hold off talks with the Government of Pakistan when the latter nation’s envoy took the inauspicious decision to meet the Kashmiri separatists without meeting the Indian envoy first.  Given Mr. Thapar’s long record, it’s no secret which his favourite nation is.

In that earlier piece, Mr. Thapar was in no mood for jokes, he didn’t suggest that Modi should just welcome the Pak envoy for a plate of Kashmiri pulao and a glass of Roohafza. Instead, he rebuked the Indian Government for being …well, patriotic and doing the right thing for the nation’s interest. Only Mr Thapar can explain how the Pakistani government which has failed to curb border incursions along with cross-border terrorism did the right thing in choosing to meet the Hurriyat instead of Indian officials. Maybe he is still stuck to the era when Indian governments would be content with sending letters and dossiers to Islamabad without the guts to take any action while the Pakistanis continued to carry out their belligerence with impunity.

This piece has already effectively answered Mr. Thapar’s queries on Pakistan. But when it comes to an important ally like the United States, Mr Thapar follows a different line of discourse. It appears that Thapar has picked it up from some angry communist backer who might view Modi’s visit to United States as a Gujarati salesman meeting gullible buyers.

But you know Mr. Thapar what has truly made this piece a joke on yourself? The public reaction to what Modi said. In his historic address to the mammoth crowd at Madison Square Garden, Prime Minister Modi, instead of speaking of Ali vs Frazer or New York Knicks vs Los Angeles Lakers or Wrestlemania, he did the most communal thing that defiled the Garden: he started his speech with ‘Bharat Mata Ki Jai’!!! And it didn’t stop there. He went on to mention how auspicious his visit to the United States is since it coincided with Navaratri. Even worse, the crowd cheered his speech.

It is indeed a matter of great distress that when the US has decided to tackle radical Jihadis like ISIS, their citizens are getting communalized. Mr Thapar may have lost his sleep when he heard that Tulsi Gabbard, the Democrat Congresswoman from Hawaii met PM Modi in New York and presented her personal copy of Bhagavad Gita to him stating it to be her expression of love for India. Even the Republican Governor of South Carolina Nikki Haley wrote on her Facebook page

‘We had an exciting meeting with Prime Minister Narendra Modi this morning. We look forward to building our partnership between South Carolina and India!’

Both Gabbard and Haley could have just given Modi coupons to some Manhattan steakhouse instead of following due diplomatic course, right Mr. Thapar? That’d have delighted you.

Nonetheless, the worst thing happened when the PM greeted a crowd of 60,000 who gathered at New York’s Central Park for the “Global Citizen Festival” by uttering Namaste when he should have said Howdy. Here was the perfect chance for the PM to get intimate with the American psyche and lavish praises on peanut butter and yankee steak. Instead he chose to address the young crowd with:

I feel a current of hope…Some believe that the world changes with the wisdom of the old. I think that the idealism, innovation, energy and ‘can-do’ attitude of the youth is even more powerful.

And then Modi went on to show his communal colour yet again by uttering the Vedic Shanti Mantra. However, Mr Thapar should be glad because the PM said at least one thing to please the Americans when he chose to conclude his speech with the iconic quote from the Star Wars:

May the Force be with you.

And like MSG, the crowd cheered this gesture as well. Based on the crowd reaction, I think Mr Thapar can take his “well-meaning” advice, dip it in peanut butter and gulp it down with some coke. Perhaps for a change, Rooh Afza would do well for Karan Thapar.