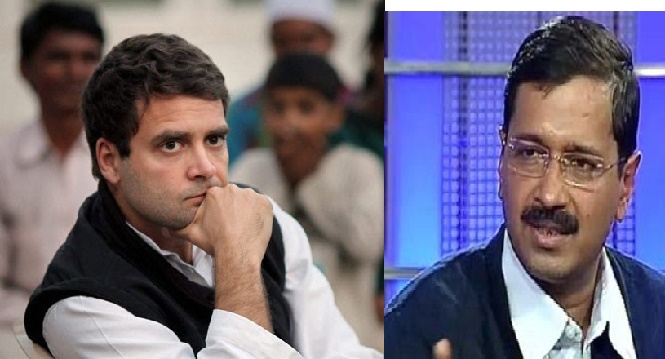 In the 1970s an Angry Young Man burst into the Bollywood scene. His name was Amitabh Bachchan and he changed the industry forever. In the 2010s, two angry but not so Young Men burst into the political scene: Congress Vice President Rahul Gandhi and Delhi Chief Minister Arvind Kejriwal.

Both of them want to change Indian politics the way Amitabh changed Bollywood. But reel life is not real life as the two have already discovered. However, their supporters still labour under severe delusions.

But the first question to be asked is why they are so angry in the first place. Have you ever seen Andhra Pradesh Chief Minister N Chandrababu Naidu getting so worked up in the public space and tearing up something? Have you heard Defence Minister Manohar Parrikar call anyone a psychopath?

So what is so special about the Pappu-Kejri duo? The answer: Both have Zero Achievements. Has Pappu ever been Chief Minister of a State or a Cabinet Minister? Has Pappu been a top bureaucrat or a CEO of a credible high performing company? The answer is a big zero. Pappu has nothing to his credit and has changed nothing for India.

He was handed Amethi like a family property on a platter and his 2004-16 Lok Sabha tenure has seen only misses and almost no hits. He bunks Parliament, takes long leaves, he chats like a schoolkid with other MPs when someone is speaking, hardly asks meaningful questions or is part of regular important committees.

He has zero talent, zero ideas and zero achievements. He can’t sell himself as a product and explain to the masses how he has already brought about at least one change somewhere and hence can bring about a change when he sits on the Prime Minister’s seat.

So the only thing he can do is attack the guy who is doing work, in this case Prime Minister Narendra Modi. That’s why you will see him getting worked up in rage and attack Modi for every stupid thing he can think of and rubbish his each and every policy even though he makes absolutely no sense at all.

That’s why you’ll see him sporting stubbles, rolling up his sleeves, doing theatrics like tearing up pieces of paper and shouting on the podium. At best he can change the script and travel in a Mumbai local train or eat in a Dalit’s hut.

That’s why he’ll get into ever greater fury when a sessions court and High Court finds merit in him being an accused in the National Herald case. That’s why you’ll find him using all his resources in disrupting Parliament and accusing Modi of vendetta instead of focusing on the case ahead.

And here’s the thing. Whether India likes it or not, it is stuck with the Angry Old Pappu Avatar at least till the 2019 general elections. Give the man a break. The poor guy has just one weapon in his armoury and that’s the only one he’s going to use non-stop.

Now let’s come to Kejriwal. You’ll probably say that Kejri is different. He was an IIT and IRS. He headed an NGO and won the Magsaysay Award. He is Chief Minister and has 67/70 seats in the Delhi Assembly. So far his record looks good. However, that is only on the surface. Deep down there is no difference between Kejri and Pappu. How?

We hear of IAS officers bringing about great changes and being transferred every six months. Kejri was posted in one place for his entire 15-year career as a bureaucrat. Again a personal achievement and nobody knows how India or the department benefited by any innovation he made there. Insiders know how murky the NGO industry is and more details about his dealings are sure to emerge in the future.

Then what of the umpteen allegations Kejriwal hurls against everybody? He went after Sheila Dixit, Robert Vadra, and Arun Jaitley to mention just a few high profile names. He gave press conferences and ranted and raved and looked really good. But did he really make any difference?

Did he present any new evidence? No. It’s always a rehash of newspaper cuttings and second-hand allegations. Did he take anyone to court? No. Has anyone been convicted because of him? No.

In fact, Arvind Kejriwal had to write a humiliating apology letter to Infrastructure Minister Nitin Gadkari who dragged him to court. This may be repeated in the Jaitley affair.

BJP leader Subramanian Swamy was one of the leaders who fought against the Emergency, ended the then Karnataka Chief Minister Ramakrishna Hegde’s political career, sent Tamil Nadu Chief Minister Jayalalithaa and former Telecom Minister A. Raja to jail and made Congress President Sonia Gandhi and her deputy and son Pappu accused and dragged them to court.

Kejriwal is not even 0.01% of Swamy. And yet the media calls Kejri a corruption crusader and Swamy a disrupter maverick. There is no way you can counter such terrible media bias. Now let’s come to the citizens of New Delhi.

Has their life improved? No. Do they have free Wi-Fi, all the CCTV cameras that were promised and the schools? No. Do they have to pay less money? No. Prices have increased and a new, pointless environment tax been introduced.

Has the garbage and sewage situation improved? No, it has worsened.

Have power cuts ended? No. Power Minister Piyush Goyal’s fantastic power reforms have already benefited many areas in India but incompetent Kejri will never be able to take benefit.

Has pollution come down? Immediately after becoming CM, Kejri announced that Delhi’s small industries need not apply for a no-pollution certificate. Won’t that increase overall pollution?

One report said that private vehicles account for just 2-3% of air pollution. That renders the Odd-Even policy (with all its umpteen exemptions) a sad joke. And yet the media was dancing with joy within just two hours of this brainless and ineffective rule being implemented.

There is no way you can counter such propaganda.

New Delhi, Bihar and West Bengal are heading for terminal decline. But there will be no reportage because they are headed by rabid Modi haters. Andhra Pradesh, Maharashtra and Rajasthan are making great progress.

But that will be played down because it will make Modi look good.Attack Modi and not only do you become secular but you become great at governance too.

Back Modi and not only do you become communal but you become bad at governance too.In the Angry Young Man movies, Amitabh fought his way to a change by the end of the movie.Pappu and Kejri will keep getting angrier and will keep adding more zeroes to their zero achievements till date.

But they are safe. All they have to do is keep attacking Modi with greater intensity.Kejri calling Modi a psychopath in a Tweet was just a natural part of this escalation. If their supporters keep willingly getting fooled, then it is their choice. We live in a democracy after all.