Kejriwal’s shamelessness has run its course 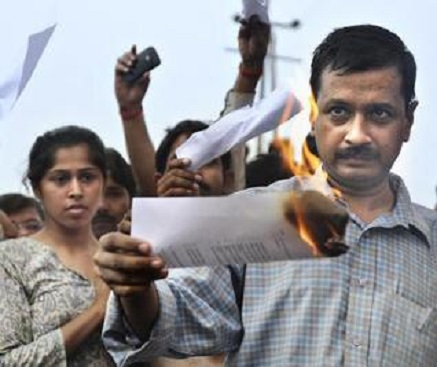 Effrontery is in the air of the political arena but the guy who takes the cake hands down is Aam Aadmi Party boss and former Delhi chief minister Arvind Kejriwal. A year ago, he ridiculed the idea of Republic Day celebrations and even threatened to disrupt the R-day parade; now, he is upset that he hasn’t been invited. Politicians are quite infamous for inconsistency, but rarely is their inconsistency so impudent and shameless.

“I want to attend the Republic Day celebrations, don’t know why I wasn’t invited,” Kejriwal said, as if it were the prime duty of the Central government to keep the self-confessed anarchist in good humor.

The AAP chief’s new gimmick also reflects his chameleon-like character. He can talk and behave like Mughal-e-Azam should it suit his fancy; so, he wants to attend R-Day function like a VIP by virtue of being a former Delhi CM, and not like an aam aadmi whom he claims to represent. When he was CM, he wanted to barge into the office of his Gujarat counterpart, Narendra Modi, without an appointment—again like a VIP, and not like an aam aadmi.

Kejriwal can also portray himself like the A.K. Hangal of Indian politics when he wants to. He can lament incessantly how everybody, from Mukesh Ambani to news anchors, has ganged up against him, how big money and big politicians are victimizing him, how he is honest and others are crooks.

Kejriwal is too conceited to acknowledge the obvious incongruities in his shifting stands, but he and his cronies are living in a fool’s paradise if they think that everybody else can be so gullible as to overlook their deceit and inconsistency. The R-Day flip-flop is only one in a series of Kejriwal’s narrative of mendacity.

Like the Congress which thought the people of India are too stupid to see through the corruption and worse of its leaders, he also believes that shouting loud about the venality of others (of which there is ample proof) and the honesty of himself (of which there is little evidence) he would be able to dupe the Delhi voter once again. This video  shows how, before elections, he gave details of the Sheila Dikshit government. He talked about a 370-page report. But, later, as Delhi chief minister, he responded to the media about action against her, saying, “Let Dr. Harsh Vardhan bring the evidence [against her], then I’ll do the needful within two hours.” Kejriwal conveniently forgot the 370-page report.

Effrontery, however, is not the prerogative of the AAP. Last week, the Indian Youth Congress (IYC) organized a demonstration near the residence of Communications & Information Technology Minister Ravi Shankar Prasad to protest against web online censorship. IYC national president Amrinder Singh Brar demanded that the government must amend the draconian Section 66A of the Information Technology Act in the next Parliament session.

Brar is right, but there are two points. First, he should have asked for the repeal or rather than amendment to Section 66A. And, second, he should not expect the people to forget that it was his own party which had introduced the illiberal Section in the first place. The objective of the guilty minister, Kapil Zero-loss Sibal, was to banish all adverse comment in the cyberspace, especially the one that targeted the celestial beings Congress leaders worship—Sonia Gandhi and her son.

The IYC protesting against Section 66A is akin to the young parricide requesting mercy from the magistrate on the ground that he is an orphan!

[pullquote]The AAP chief’s new gimmick also reflects his chameleon-like character. He can talk and behave like Mughal-e-Azam should it suit his fancy; so, he wants to attend R-Day function like a VIP by virtue of being a former Delhi CM, and not like an aam aadmi whom he claims to represent.[/pullquote]

The Bharatiya Janata Party, too, can be accused of effrontery. Whether it is the issue of Section 66A (which it opposed earlier but now wants to retain), black money, populist schemes, or retrospective taxation, the saffron party’s response has been either imprudent or impudent. It shouldn’t forget that Rajiv Gandhi—who had won the largest mandate, much larger than the BJP’s—lost power in 1989.

Our political masters are unlikely to become straightforward people in the foreseeable future, but they need to realize that the electorate is no mood to tolerate downright insolence and shamelessness. The sooner politicians, the better it will be for them.