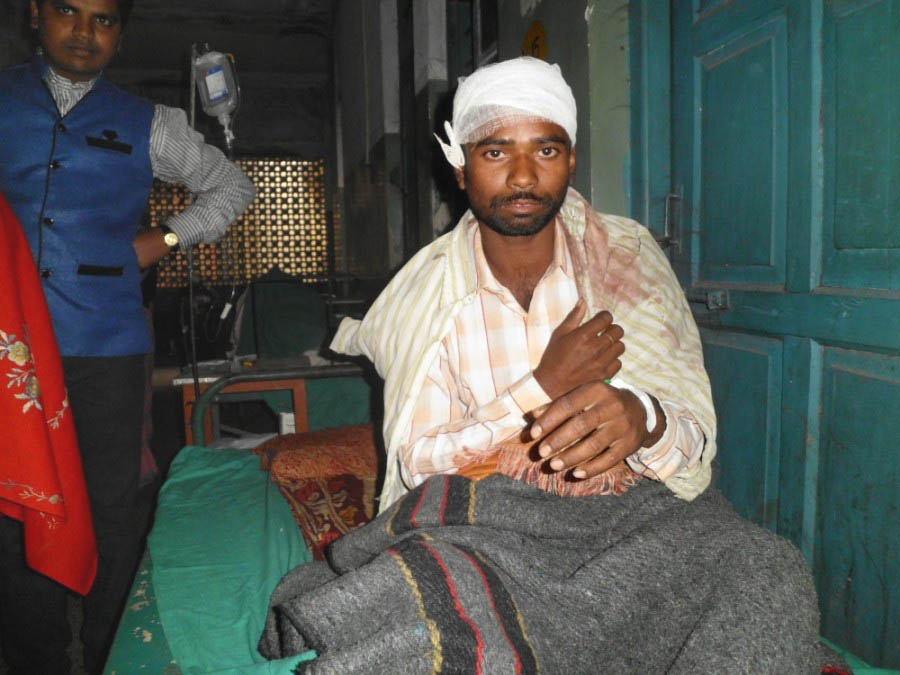 This is a ground report from Hindu Samhati, the West Bengal-based organization dedicated for Hindu causes.

This week, the Hindu women and Hindu villagers of the Radhakantapur Panchayat of the Raidighi Block in South 24 Parganas District, West Bengal became the latest victims of land and rape Jihad.

Here are the facts of the gruesome incident.

Summary of the incident:

Some photographs of the incident are included in this report.

The aforementioned Hindus have been savagely beaten up by Muslim miscreants of the same locality. The women have been molested, manhandled, and rapes have been attempted on them.

Their only fault: They all tried to stop the local Muslims who tried to encroach  the land of Subal Mandal.

In this area of the Raidighi block, Muslims are forcibly capturing all Government lands (primarily belonging to PWD and Irrigation departments) by the side of public roads. These plots of lands are just in front of Hindu houses, Hindu agricultural lands and Hindu-owned ponds (used by families for bathing and fishing). By the encroachment of these government lands, the entry of Hindus as well as their passage to their own lands will be blocked. Moreover, Hindu women will be unsafe while bathing in these ponds.

However, many roadside lands have already been forcibly captured by the Muslims. “To complain to the police is absolutely futile”  is the constant and familiar refrain one hears from Hindus.

Therefore local Hindus realised that the only way to ensure the protection of their lands and their safety, was to physically resist the attempts of such encroachment by these land-grabbing Muslims. Just a few months ago, local Hindus inspired by Hindu Samhati resisted the attempt of land grabbing in front of Tarak Gayen’s plot.

However, this time around, the piece of land (in front of the Subal Mandal’s land) was at stake. Muslims were forcibly engaged in capturing it. Subal Mandal and other Hindus resisted such attempts. And became victims of severe torture by said Muslim miscreants. The honour of their women was violated.

Among thousands of such Jihads of various hues that occur in West Bengal every year, this is extraordinary case because Hindu villagers are courageously fighting back against what is considered the norm in deep rural West Bengal. This is the daily reality of our secularism. The Mamta Banerjee-led West Bengal Government is profoundly corrupt and relies on the vote bank of dangerous Jihadis. A hugely politicized police force is naturally spineless.

Hindu Samhati is fighting tooth-and-nail against such rampant, ongoing Jihads and requires the help of the larger Hindu samaj anywhere in the world to counter and stop this menace.

We need at least one phone call from you to the following officer(s) requesting them to help the victims and arrest the culprits:

Your one phone call carries enormous influence and power. Please call and urge these police officers to help the Hindu victims and arrest the Jihadi culprits.

(a) Protecting common citizens is not your duty?

(b) Maintaining law and order is not your priority?

(c) Your definition of Communal harmony is to allow Muslim miscreants to attack, injure and molest Hindus?

(d) Does your definition of Communal Harmony include not arresting the culprits if they are Muslims?

To repeat, please make at least one phone call to the above officials today. They speak English, Bangla and Hindi.

If the officer asks you “From where did you get this information,” you can take the name of Hindu Samhati and tell him that Hindu Samhati, an NGO, is in touch with the victim’s family.

Each phone call will make a big impact on the future of Hindus in the border areas of Bengal and Bharata.

Your one phone call will help the victims, punish the culprits, build the morale of the local Hindu villagers and stop the flight and/or migration of defenceless Hindus away from the border areas, which will then turn into another Kashmir.

From the past, we have seen that your phone-call makes a huge difference in the attitude and promptness of the police officials to help the victims.