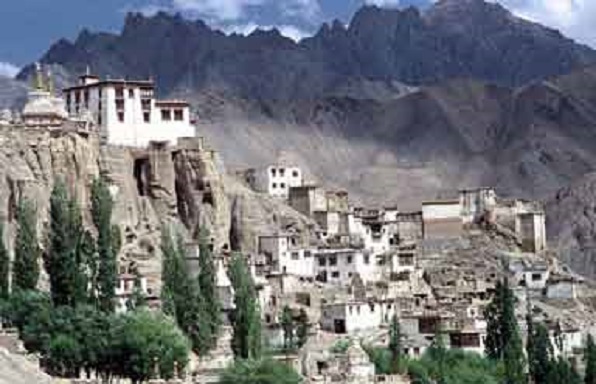 Lives of at least 5,000 people in at least 40 villages in Zanskar Valley, once an ancient Tibetan Buddhist kingdom, in the eastern part of the Indian state of Jammu and Kashmir is in danger after a massive landslide blocked a river tributary on NewYear’s eve.

The location of the landslide dam is near Marshun village, about 90 kilometers from Padum, headquarters of Zanskar in the strategic Kargil district. A handout of the Press Information Bureau of the Government of India said the National Crisis Management Committee, NCMC, met in New Delhi on February 20, under the chairmanship of the cabinet secretary Ajit Seth to discuss the situation arising out of blockage of Phuktal River. The NCMC approved an action plan to manually create a channel in the blockage to drain out the accumulated water from the lake in a regulated manner.

“So far the lake created is frozen. so far the lake created is frozen till now, the threat of its breach looms as soon as the summers start.The threat of its breach looms as summer starts,”RaminderJit Singh, who is president of THE – SARA, a nonprofit dedicated to prevent suicide in the valley, told this scribe fromJammu, winter capital of Jammu and Kashmir state. The Delhi-based South Asia Network on Dams, Rivers and People, SANDRP, an informal network of organizations and individuals working on issues related with the water sector and dams, said the Phuktal River, which is one of the sub-tributaries of the Zanskar River had been blocked since December 31 by a massive 200-ft high landslide dam, equal to height of a 20-storey building.

“The length as also area and volume and even the width and depth of the reservoir formed by the landslide dam is increasing. So it was five kilometers long initially and has grown to 14 kilometers as per the latest estimates,” Himanshu Thakkar, coordinator of SANDRP said in an email from Delhi.

To a query about the cause of the landslide, Thakkar said it is not known what triggered it. “There could be natural process of melting and thawing in the winter, clubbed with heavy incident of snowfall and also possibly micro seismic activity in landslide prone dry desert area.”Thakkar said the responsibility of alerting and relocating the people at risk is that of the district administration, but they need to clearly define the areas at risk, the intensity or level of risk, possible timing and warning period, etc. He also called for a better coordination between the different agencies at work.

Earlier this month, All Zanskar Students Association activists staged a protest demonstration in capital Jammu to demand immediate action. The Greater Kashmir newspaper described the situation as an “eco-disaster” and said environmentalists have warned that a delay in addressing the issue can cause “catastrophic flashfloods” in downstream areas.

India’s National Disaster Management Authority, NDMA, acting as the nodal agency, is overseeing the action plan to breach the blockage. Naseer A Ganai, Senior Correspondent for the Mail Today, in an email from Sri Nagar said an NDMA team after visiting the spot had advised against laser bombing. “In case of the laser bombing, NDMA fear there would be various breaches which could lead to flooding of the whole area,” Ganai explained.

The Daily Excelsior had reported Indian Defence Secretary R.K. Mathur, who attended the NCMC meeting,rejected the idea of laser bombing in the backdrop of concerns raised by the Indian Air Force. The report also said cabinet secretary Seth directed relocation of all the 42 families who inhabit the areas on the downstream of the river before the blasting begins. Citing Kashmiri officials,journalist Ganai said the NDMA team would visit the landslide dam March 1 and try to create manual breaches. He added the team even has an option to use low intensity explosives to create breaches.

Ganai said an official of Tourism and Information department in Kargil district had told him that in case of abrupt flooding 40 villages, having a population of 5,000 would be affected. “He says already the local administration has moved 300 most vulnerable people to safer places in Kargil,” Ganai said.

Zanskar, once an ancient Tibetan Buddhist kingdom where much of the rich culture is still intact, is in the Kargil district where India and Pakistan fought a war in 1999 after former Pakistan army chief Pervez Musharraf, who later seized power in a coup, secretly sent Pakistan troops to occupy the snowy, strategic heights. The snowy heights turned into a graveyard for the Pakistani soldiers, many of who died of cold and starvation. Pakistan initially denied its soldiers were involved in Kargil, but later accepted the bodies of its men in uniform.

Shripad Dharmadhikary, one of South Asia’s foremost water and energy experts, in “Mountains of Concrete,” a research work published by Berkeley-based International Rivers, warns dams’ reservoirs and transmission lines in the Himalayas will destroy thousands of houses, towns, villages, fields, spiritual sites and even parts of the highest highway of the world, the Karakoram highway.

Last fall, India objected strongly when Obama administration officials organized an event in Washington DC to garner funds for the controversial 4,500 MW Diamer-Bhasha project in disputed territory between the two nations. Two U.S. officials Daniel F. Feldman, U.S. special representative for Afghanistan and Pakistan and Richard G. Olson, U.S. ambassador to Pakistan, are strong supporters of the dam project. A third key supporter of the dam project, Robin L. Raphel– former Assistant Secretary of State for South Asia –, who throughout her career was a voice for the Afghan and Kashmir mujahideen, is facing an FBI probe for suspected spying for Pakistan.