The Legacy of Christian Politics 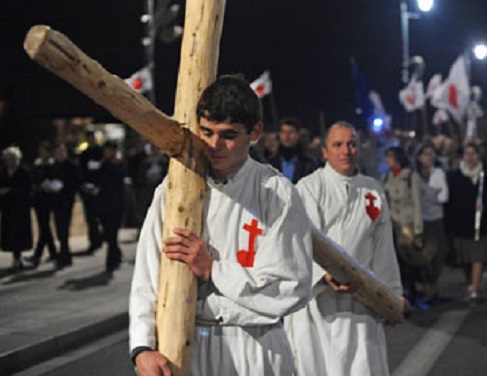 This was contributed by an IndiaFacts reader from Sri Lanka.

This opinion piece is intended to throw light on a subject that the Anglicized Sri Lankan Establishment never discusses. The political role played by the church is deliberately covered up in Sri Lanka. The English speaking Sri Lankan intelligentsia instead focuses on Buddhist, Hindu and Muslim fundamentalism. Its important to investigate, scrutinize and ferret out what is intentionally overlooked in Sri Lankan debates.

This synopsis is intended to illustrate the role of the church in international politics. The subject is by definition vast and examples can be provided from every continent. But brevity demands that this be a short and selective piece.

This is not to deny the civilizational and intellectual role of Christianity in defining Europe along with the latter’s rich Graeco-Roman inheritance. This is not to attack Christians. Violence and prejudice exists in all religions. This precis is merely a corrective to the exclusive focus on Buddhist, Hindu and Muslim fundamentalism in the Colombo discussion circuit.

The church sanctioned the African slave trade in keeping with the tenets of the Bible. Pope Nicholas V issued a papal bull in 1452 justifying the slave trade. 12 Million Black Africans were shipped to the Americas between the 16th and 19th centuries. An added 4 million Africans are estimated to have died in the process.

What is less known are the recent events in Africa. The 1980s and 1990s marked the emergence of the Republican Neo-Right in American politics, one linked to Pope John Paul II and the Evangelical Protestant Church. Ronald Reagan and George Bush epitomized this politics. The goal was to roll back Communism in Europe, Christianize Africa and intervene in the Middle East.

There was an organized and well-funded Christianization of the African continent on an unparalleled scale. Missionaries dismissed traditional African mores as “animist”, “backward” and “pagan”. Conversions disrupted social links, undermined tribal cohesion and fractured grass-roots society. Africans were taught to denigrate and reject their own past. This mass evangelization accelerated the breakdown of the African state and contributed to endemic civil conflict. That in turn displaced millions and resulted in famine and HIV/AIDS. Examples include the Congo, South Sudan and Rwanda. It also led to the heightening of Christian Muslim tensions in Nigeria, Sudan, the Central African Republic, Chad, Cameroon, Ivory Coast, Burkina Faso and Kenya.

A million Rwandans, almost all tribal Tutsis, were killed between April and June 1994. The United Nations did nothing as the murders took place in full view of international television. Timothy Longman released his monumental thesis in 2010 entitled Christianity and Genocide in Rwanda published by Cambridge University Press. Churches became the primary killing grounds. Archbishop Thaddeo Nthinyurva, Bishop Augustin Misago, Bishop Jonathan Ruhumuliza and countless nuns and priests were accused of participating in the genocide.

The church did not excommunicate any of them. The church fostered tribal divisions between the Tutsis and Hutus with its spurious scholarship of the Nilotic Tutsis and the Bantu Hutus. The two “tribes” however spoke the same language, followed the same tradititional religious customs and were racially linked! This was a social division and not racial. The Roman Catholic church backed by France supported the genocidal Hutu Administration. The message was sent out that tribal discrimination was consistent with church teaching.

The Dutch Reformed Church similarly legitimized and sanctioned the system of Apartheid in South Africa. Blacks were excluded from wealth, power and dignity. A series of well educated and pious Dutch-speaking Calvinist theologians justified the racial segregation with reference to the Bible. This was standard Calvinist dogma in South Africa until 1992. The revisionist Christian history would like to down play these sorry instances with references to activist anti-Apartheid clergymen instead.

Much of the Anti-Semitism that defined European history since the introduction of Christianity can be traced to the New Testament where the Jews were referred to as “sons of the devil”, “vipers” and “hypocrites”. This scriptural sanction explained the repeated violence and mass murder directed at the Jews. St Augustine of Hippo, Saint John Chrysostom and Saint Ephrem the Syrian provided the theological basis for the persecution of Jews. The Jews were accused of Deicide or the murder of “God” i.e. Jesus. Pope Paul IV in 1555 issued a Papal Bull sanctioning pogroms.

The Spanish Inquisition and the Nazi Holocaust took place in a context shaped by Christianity. Pope Pius XII was silent as millions of Jews were sent to the gas chambers in Europe. When Germany was defeated in 1945, the church helped Nazis flee to South America. John Cornwall published his work Hitler’s Pope: The Secret History of Pius XII in 1999, which discusses these events in detail. Pope Francis is expected to canonize Pope Pius XII as a saint.

What is less well known was the similar burning of women at the stake by the medieval church. Pope Gregory VII in 1080, Pope John XX11 in 1320 and Pope Innocent VIII in 1484 invoked the Bible to sanction the killing of women suspected of witchcraft. While revisionist historians linked to the church downplay this act of cruelty, Mary Daly, an American feminist theologian, estimates that nine million women were burnt on the stake in Europe between 1450 and 1750 AD. She published her Gyn/Ecology: The Metaethics of Radical Feminism in 1978. The modern church and associated scholarship vigorously disputes her conclusions.

The extermination of the indigenous peoples in the Americas and Australia can also be attributed to the introduction of Christianity and white man’s rule. The Spanish massacred, pillaged and destroyed the Native Americans in the name of Jesus. Pre Christian America had developed in isolation and had its towering achievements in mathematics, astronomy, engineering, literature and the arts, a legacy which has now been completely obliterated. Inca, Maya and Aztec monuments were razed. This represented a successful instance of cultural genocide.

The Native Americans perished as they were forced into hard and inhumane slave labor. It is estimated that there were 50 million Native Americans in 1490. This declined to 1.8 million in 1890. American historian David Stannard has documented this in his thesis American Holocaust published by Oxford University Press in 1992. The revisionist church attributes the whole sale disappearance of the indigenous peoples to the ravages of European disease. That analysis conveniently omits deliberate attempts at murder, killing and slave labour. A revisionist history instead emphasizes the actions of individual Christian clergy men who attempted to help the native American. These were the exception to the rule.

Many more examples can be provided using the histories of Asia and the Middle East. So before we focus on Muslim, Hindu and Buddhist fundamentalism alone, lets not deliberately sidestep Christian politics and its legacy. Its important to be even-handed while assessing religious fundamentalism and its impact on politics.