Letter to a Moderate Muslim 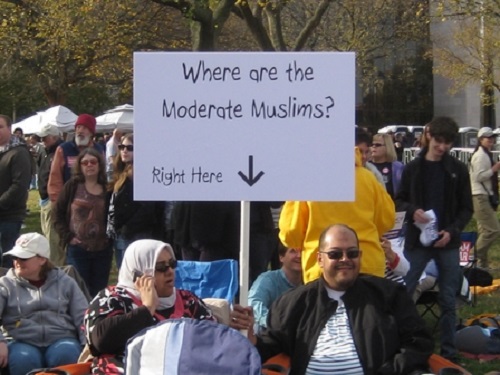 This is the concluding part of the series Unfinished Agendas of Radical Islam. In this I don’t discuss any case but address the myth of the moderate Muslim.

I am sure this open letter will never reach you for the simple reason that you don’t exist.

I have been told again and again by a long list of secular, liberal and multicultural friends that when I criticize Islam I also have to think about the moderate Muslim and assume him to be the real guardian of Islam. But I have looked for vain, and I have looked for years. And I am not alone. The search for the moderate Muslim is nothing less than the search for El Dorado. Everyone talks about it. Everyone swears by it. Everyone thinks all problems in the world will be solved when he is found. But no one has ever found a moderate Muslim. It remains a mirage; a daydream; the wishful thinking of the non-Muslim who refuses to accept that fundamentalism lies at the very heart of Islam.

But, you my imaginary ‘moderate Muslim’, have done no such thing. And I will show you how. Let us start with the fundamentals.

Extremism is not a peripheral feature of Islam. It lies at the very heart of it. A non-Muslim does not have to spend a lot of time with Islam to find extremism. Intolerance of each and every kind of ‘other’ finds him at the very doorstep: at the first pillar of Islam: the Shahada.

The Shahada declares: “There is no God but Allah, and Muhammad is his Messenger.”

A Muslim greets a non-Muslim by declaring that the non-Muslim God or gods are demons, devils and figments of his imagination. That there is no God but Allah. The extremist Muslim holds this intolerance exclusivist view. But so does the moderate Muslim.

The extremist Muslim believes that Islam is the only true religion and all other religions are false and their followers will rot in Hell once the Qayamat arrives. That “there can more than one path to truth” has to be accepted as the basic premise of moderation. But the moderate Muslim also believes that all other paths lead to Hell.

Moderation would require that basic human rights are extended to all, regardless of the religion, creed and ethnicity. But the fact that Islam divides humankind between two exclusive group of ‘us’ vs. ‘them’, in which the ‘othering’ is so complete that non-Muslims are not only ordained to go to Hell but are also denied all basic rights in this world as well. Islam practices equality only between the believers. The non-believers are fair game for every sort of crime, be it abduction, rape, slavery or murder.

Moderation would require that a basic equality of all in front of law is allowed to all. The Islamic law Shariat demands that the testimony of the non-Muslim does not hold in a court of law. The Islamic law demands that the testimony of a woman is only half as worthy as that of a man. This is the stuff of extremism. That the moderate Muslim does not even breathes a whimper against this basic legal discrimination attests to his non-existence.

Moderation would require that you accept the secular law as above and supreme to the religious law. The fact that just like the extremist Muslim, you also believe that the only law which binds you is the law of Islam, the Shariat shows your disrespect towards the very idea of democracy and law. This is not the stuff of moderation. This is stuff of extreme radicalization.

Moderation would require that art is given a free hand; that the artist, within limits is permitted to create human as well as animal figures as he wishes to. The fact that you also consider this wrong shows that you are no different from the extremist Muslim.

Moderation would require that you would accept the testimony of science, and most of all of Evolution and that man evolved just like all other animals and plants and is not a special creation of Allah or any other god. The fact that you still stick to the dogmas propagated in the Quran instead of accepting the testimony of science shows that you are no different from the extremist Muslim.

Moderation would require that you accept that knowledge and truth are possible outside the realms of Islam both in time and space. For that you would have to reject the concept of Jahiliya, the concept that the time before Islam was revealed to Muhammad was a time of ignorance.

Moderation would require an acceptance of the fact that direct contact with divinity is possible and that there can be more than one messenger for God. The fact that you think this is impossibility just like an extremist Muslim shows that you really are a figment of the imagination of a useful idiot.

The Quran contains some extremely intolerant and problematic verses about the non-Muslims in which the Muslims are exhorted to kill non-Muslims wherever they are found. Moderation would require that you reject at least these verses of the Quran. Moderation would require that you would argue for changing these verses so that cohabitation of Muslims with fellow non-Muslims would start to become a reality. The fact that you don’t do that once again shows your non-existence.

You are not the one who kills Hindus in Pakistan and Bangladesh but you are the one who accepts that the only way Hindus can survive in an Islamic country is to live like second class citizens who do not even get to cremate their dead.

You were not the terrorist who killed the apostates of Islam in Bangladesh, Pakistan and many other countries, but you also think that it is legal to kill apostates.

You do not throw gays from the rooftops in Iraq but you also think that sodomy should be punishable by death or by lashes at least.

You might not be the terrorist who gang-raped and sawed in half the body of Girija Tickoo, while she was still alive, in Kashmir, but you supported the ethnic cleansing of Hindus that was going on. You also believed that Kashmir is only for Muslims and that Hindu lives do not matter.

While the extremist Muslim gets into the field and accomplishes all the goals discussed above, you, my moderate Muslim, help and facilitate him in civil society, by creating a movement conducive to his goals. You help him by silencing the dissent among the Hindus, those Hindus who really see radical Islam for what he is. You are the smokescreen that the Islamic terrorist uses to kill non-Muslims in their sleep wherever they are found. You are the diversion that the Islamic terrorist uses. You are the Shaheen Bagh that makes possible a 26/11.