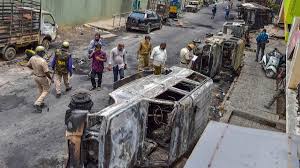 The recent incidents in Bengaluru, triggered by a minor event, led to the country’s I.T. capital almost shutting down for two days after widespread violence and arson erupted in many parts of the southern metropolis. A minority community in the city attacked police stations, shut down large areas and assaulted some individuals and families who had allegedly insulted their religion and their beliefs.

Now, this is such a regular occurrence in many parts of India in the last few decades that the people of our country seem to have almost tacitly accepted the phenomenon. In the current year itself, Delhi, the capital of the Republic, saw violence and lawlessness on an unprecedented scale that was set off by the passage of a law in Parliament. The anti-CAA conflagration lasted for more than two months before it ebbed slowly. This author has analysed the Delhi events and similar outbursts in two articles published earlier in the year:

In this essay, I will spell out the historical and analytical background of insurgencies planned by small groups of activists and how the events unfolded in earlier cases. Let us first deal with the basic parameters that are involved in this socio-political arena.

(A)  Organisational strengths of the insurgents – the need for quick mobilisation of people, not necessarily in large numbers but in cohesive, determined, fanatical groups, who are willing to take on the state and its administrative structure.

(B)  Clear control and guidance for the mobs: here, the command structures are located in the religious institutions or party offices. In contemporary India, these are the masjids and seminaries or the party offices during the brief Naxalite upsurge a few decades back. During the Spanish Civil War, many churches and offices of the Falangists (General Franco’s party) were discharging this function. The methods of crowd control have obviously evolved over time.

(D)   The weaknesses of the local administration are carefully researched, identified, circulated to the insurgent activists and targeted during the local insurgencies.

Let us now go back in time and study the tactics and behaviour of insurrectionary crowds in the past. One of the major studies on this is subject is the well-known treatise by George F. E. Rudé,  The Crowd in the French Revolution (Oxford University Press, 1959, 1st Edition). The author of this book, of course, analysed crowd conduct in the case of a successful revolution, and not in the case of local outbursts that were eventually brought under control by the state administration (not before considerable damage and destruction), as has been happening in India in the recent past.

What kind of people constituted the crowds that stormed the Bastille, marched to Versailles to bring the French king and queen back to Paris, overthrew the monarchy in August 1792, or impassively witnessed the downfall of Robespierre on 9 Thermidor? Who led these crowds or mobilised them to action? What did they hope to achieve, and how far were their aims realized?

Earlier analysts and historians have generally subscribed to the view that a revolutionary crowd was an abstraction -“people” or “mob” according to the researcher’s prejudice, often even as the personification of good or evil. Professor Rudé’s book made the first attempt to objectively bring to life each of the important Parisian crowd events between 1787 and 1795. Using police records and other contemporary research materials, the author identifies the social groups represented in them, contrasts the crowds with their political leaders, relates their activities to underlying economic and psychological tensions, and compares the Parisian crowd “patterns” to those of other popular movements in France and Britain during the 18th and early 19th centuries.

The parallels between France of the 1780s / 1790s and Delhi / Bangalore / Gorakhpur / Murshidabad in the 2010s and 2020 are interesting. The crowds in these cases, although not constituting a large proportion of their original habitats and places of residence, were all cohesive in terms of their identity and values. In the Indian cases cited here, they were Muslims, ideologically formatted in their daily places of worship, the masjids. Before the secularists in Lutyens Delhi go ballistic, I must inform my readers that, In earlier times, the rampaging masses would have been factory workers in West Bengal trained by their union leaders or tribals in MP, indoctrinated by the Naxalite ideologues.

The main attributes of the insurgent crowds over the ages are their mobility and the element of surprise they bring to their attacks. And, as stated earlier, the crowds leveraged their advantage over the weaker elements in the governance structure in the countries/locations where they attacked. If we now want to focus on a closer historical parallel, we must study how the Falangists (the rebels against the legally-elected Republican government of Spain in the 1930s) operated. There are two classic studies of the Spanish Civil War, The Spanish Labyrinth: An Account of the Social and Political Background of the Spanish Civil War by Gerald Brenan (1950, Reprinted 1990) and The Spanish Civil War by Hugh Thomas (1961).

The Spanish Civil War has a lot of significance to scholars of civil unrest. This is particularly so because of the Fifth Column concept that first emerged during this conflict. A Fifth Column is defined as follows: it is a group of people who undermine a larger community or an entire country from within, usually in favour of an enemy group or nation. The activities of a Fifth Column can be open or covert. In the clandestine form, Fifth Column elements,  gathered in secret, can act in a determined manner to assist external aggression. The term is also applied to organised actions by groups of closely-integrated people who act in unison to destabilise the domestic government and aid foreign forces in attacking the country.

The role of the Catholic Church in fomenting dissent against the legitimate Republican government of Spain is also something that is still remembered and commented upon even now, so many years after the event.  The 5th Column spread panic and engaged in sabotage, espionage and diversionary activity against the legally-elected Spanish government throughout the Civil War. In contemporary India, the Catholic Church’s counterpart is extremist Islamic jehad propagated in the masjids.

What should be of great interest (and considerable concern) to the Indian security establishment and its think tanks is the adoption of urban guerrilla tactics by Islamist groups and their ideological allies in civil society. Normally, guerrilla warfare, particularly in South America, is practised in rural areas, with the emphasis on controlling the countryside. This was the Cuban model, to begin with, and later replicated in other countries in South America, because of its resounding success earlier in Cuba. Guerrilla warfare is generally not successful in urban areas, because they are compact and well served by roads.

This means there just isn’t enough space to hide the training camps (however well concealed), weapons caches and safe houses. In practice, no urban guerrilla movement has managed to move beyond the first portion of its operations – creating conditions where the government takes extreme repressive measures to limit the activities of the insurgents. The formation of a number of brutal military regimes in Latin America is directly linked to the efforts of guerrillas. However, the next stage has never been achieved, i.e. a popular uprising to overthrow the government.

This brings back the moot question as to why the Indian insurrectionary groups in Bangalore and Delhi resorted to urban violence. Some analysts say that this was a trial run for urban guerrillas to test the Indian state apparatus. It was also to send a message of reassurance to their own support base. After all, the local police forces, whether in the States or in a Union Territory like Delhi, are the weakest links in the country’s security framework. Readers will recall that the insurgent hordes deliberately chose some symbolic acts that resonated in the media and surely among their bank of supporters.

This included an activist holding his gun against a policeman’s head in full public view. To his great credit, the man in khaki did not blink and earned a rightful position in the roll-call of honour of his force.  The same was not true of the other members of the Delhi Police who were caught on camera running for cover when confronted by the marauding crowd – a sight that was gleefully played up by the Lutyens media for many days.

One of the definitive studies in recent times on urban insurgency and guerrilla war is from one of the U.S. military think tanks. This is Abraham Guillen: A Relevant Theory for Contemporary Guerrilla Warfare by Major J Manuel Gonzalez (U.S. Army Command and General Staff College, Fort Leavenworth) (2015). The author admits that urban guerrilla activities, in general, have been discredited as a concept, because they have never succeeded in practice. Nevertheless, he goes on to critically assess the strengths and weaknesses of Guillén’s theory of urban guerrilla warfare and to explore the implications of his theory. Major Gonzalez thinks that  American military forces may be required to operate in new complex environments like megacities in the foreseeable future. Guillén’s theory of urban guerrilla warfare provides a relevant blueprint in such operating environments. Comprehending it more fully would be most useful for counterinsurgency operations in the years to come.

In the Indian context, the analytical framework of Guillén will become even more relevant because of the increasing migration from rural areas to mini-metros and the metro cities. There is also the Indian phenomenon of communal congregation whenever this type of urbanisation occurs. Therefore, we have seen the growth of residential clusters in urban areas based on religious affinities. When this happens, mobilisation of flash crowds, accumulation of illegal arms and ammunition and enforced segregation become realities. Soon, parts of some urban areas become no-go zones for the local police and security forces. Lebanon and Kosovo no longer remain abstract concepts in India.