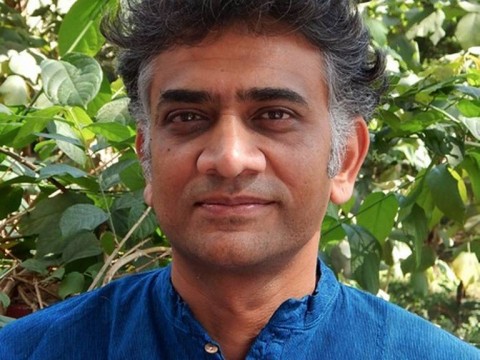 In the 19 October edition of TOI, the ever-erudite Aakar Patel, gave us the most important criterion a leader should have in order to be elected.

Indeed, it is much simpler than these confusing adjectives. In Phenomenal Patel’s books, it’s only the looks. Looks maketh a leader. Check this out:

Meanwhile on the other side, lefties are mostly thin. I present the Karats, both he and she, and bird-like Jyoti Basu. All good-looking. It is true Sitaram Yechury’s barber takes a chisel to that hair instead of scissors, but there’s something aesthetically pleasing even about him.

The Congress leadership may not be bright or honest or, truth be told, even competent. But one thing we cannot accuse the Gandhis of is ugliness. They are a singularly striking looking family, like those other dynasts, Bollywood’s Kapoors.

Let’s be charitable to Mr. Patel. I remember reading somewhere that during the 44th US presidential election, people elected the Democratic candidate—the debonair, dazzling and well-built John Fitzgerald Kennedy over the Republican Richard Nixon whose face according to many “resembled a rotten potato.” It had nothing to do with Nixon’s dull performance in the televised Presidential Debate or Kennedy’s dynamic approach in fiscal and foreign matters.

It was the dashing smile that won Kennedy the elections—I mean, who wouldn’t vote for the man who had impressed the Marylin Monroe? Why would Americans care about the economy when they can hear Ms Monroe sing ‘happy birthday’ to the President?The lasting image of the handsome Kennedy even helped his Vice President, the not so handsome Lyndon Johnson win the 1964 Presidential elections  which took place a year following Kennedy’s assassination.

The Republican candidate of that time, Senator Barry Goldwater of Arizona, was deeply disliked for his conformist political positions. Whereas Johnson advocated social programs to curtail racial segregation, collectively known as the Great Society, Goldwater was not clear about such issues. Also Goldwater’s aged face could not stand up to the chubby Lyndon Johnson, who had the additional fortune of being associated with the handsome Kennedy.

But then it starts getting confusing—during the 1970s and 80s, with the exception of 1977 elections, the Americans went on to elect frail and wrinkled Republicans like Richard Nixon, Ronald Reagan (past his cinematic prime) and George H.W Bush over handsome hopefuls. What on the earth went wrong?

For answers, serious reading is required—books by folks like Peggy Noonan, William F Buckley Jr., and Tom Brokaw are fairly decent. Actually, no. All that’s required is the formidable Aakar Patel who makes it as easy as this: the American idea of beauty must have changed; the fashion of the season is wrinkles over beauty. Reverse-botox won those aged and wrinkled Presidents the day.

Back to India, reading Patel gave me the idea as to why the CPM led by the suave Buddhadeb Bhattacharya in West Bengal was routed by the rugged and loud-mouthed Mamata Banerjee’s TMC in the 2009 general elections and the succeeding Bengal assembly elections of 2011: the comrades couldn’t beautify the state. In their three decade rule, whereas comrades Jyoti and Buddhadeb were aging handsomely, the state of Bengal was sprouting acnes of stagnation and looked less like ‘India’s France’ and more like a random Parisian marshland.

Unlike the comrades, the moon-faced Amit Shah was part of an administration that ensured that the face of Gujarat does not get sullied by craters on the state’s roads.

But to be fair, we should let Mr. Patel explain if say, the good looks of Rahul Gandhi were among the reasons his party didn’t win? Maybe the public didn’t want the young Gandhi scion to lose his dynastic splendor trying to fix the country’s problems. Mr.Patel would agree if I paraphrase Marlowe in claiming that Rahul Gandhi has ‘a face that can empower a thousand women and light the bonfire of the Grand Old Party.’

Earlier in the article Mr.Patel states:

As a student I noticed handsome SP Mookerjee on BJP posters. Seduced, I purchased his book, ‘Leaves From A Diary’. The writing was pedestrian (Page 109: “What is the aim of this life? Wallowing in luxury and pleasure? Certainly not! We are here only in transit and will have to move on” etc). This was acceptable since Hindutva is about passion, not intellect. What disappointed was the cover, sporting Mookerjee’s chubby face. What happened to that patrician I was promised on the poster?

But we always thought of not judging a book by its cover. Sigh. Maybe I need to follow Mr. Patel in ‘judging the book by the poster of its author.’ Perhaps that singular event has contributed immensely to penning pieces like this.

That also explains his statement that Hindutva is about passion, not intellect. Aakar Patel should have tried the writings of Ambedkar, Savarkar, and KM Munshi , not because of the erudite expositions on philosophy, society and history they make (Mr. Patel wouldn’t have the ability to comprehend them), but because he would have been mesmerized by the rugged handsome looks these savants have been gifted with.

Finally at the end of this sorry saga we see this:

What puzzles me is this. Conservatism originates with the aristocracy, which is usually good-looking. So what went wrong here in India? Could it be some mutation? And will it affect their future? Friends studying natural selection tell me that it has ever been thus: those unequipped to face modernity and change, clinging on to ancient prejudices, fade away. But I hope Hindutva remains with us, if only for the variety. And, having read this, they shouldn’t worry themselves too much about what to do. It does not really matter because, as Churchill observed, you will still be ugly in the morning.

Aakar Patel has immersed in his ugly treatise on beauty that he has abandoned his knowledge of history. Although conservatism worldwide did originate with the aristocracy, it became successful when it struck a chord with the rising middle class and became a proponent of social progress.

That is the reason why, in modern societies like Germany and England the conservatives have been led by people hailing from middle-class backgrounds. Two of the most successful heads of state in these two nations have been the teacher’s daughter Angela Merkel and the grocer’s daughter Margaret Thatcher in recent times. And by Aakar Patel’s standards, both these women aren’t blessed with drop-dead looks.

In fact, Mr.Patel seems to contradict his own slanderous thesis when he tries to pitch the scientific notion of natural selection that is, in his words:  ‘those unequipped to face modernity and change, clinging on to ancient prejudices, fades away.’

Let’s put this to test with the Karats and the Gandhis. By Aakar Patel’s own theory, they must now look physically horrendous because they still cling to discarded ideologies like Nehruvian socialism and communism. Aakar Patel must first look at himself in the mirror and confirm for himself that his own face indeed reflects the revolting condition which his writing does.