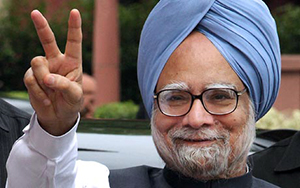 Centre for National Renaissance president and Bharatiya Janata Party leader Subramanian Swamy famously compared Manmohan Singh with Bhishma of the Mahabharata. Like Bhishma, who did nothing to check the disrobing of Draupadi, Singh too didn’t do anything to stop the rape of the economy, endangerment of national defence, deterioration in internal security, and marginalization of India in the comity of nations. The comparison, though insightful, is not very accurate.

While Bhishma, for all his might and valor, could have stopped the outraging of Draupadi’s modesty, it can be said in his defence that he still was bound by his vow to be loyal to the throne of Hastinapur. It can be argued that the honor of the lady, and that too from his own family, should have preceded the sanctity of the oath.

Manmohan Singh has not even a semblance of defence for his spinelessness. While Bhishma was oath-bound to evil (Duryodhana), Singh was bound by the oath to end any wrongdoing. As per the oath of office, he had sworn “allegiance to the Constitution of India.” Further, he had sworn that “I will uphold the sovereignty and integrity of India, that I will faithfully and conscientiously discharge my duties as prime minister for the Union and that I will do right to all manner of people in accordance with the Constitution and the law, without fear or favor, affection or ill-will.”

Sanjaya Baru’s book, The Accidental Prime Minister, has put it on record what was widely known anyway: that Sonia Gandhi and her confidant took important decisions, whereas Singh obediently implemented them. According to Baru, who was Singh’s media advisor for four years (2004-08), Prime Minister’s Office functionary Pulok Chatterjee had “regular, almost daily meetings with Sonia Gandhi in which he was to brief her… and seek her instructions on important files to be cleared by the PM.”

In short, Singh willfully violated the oath of secrecy. Which makes him a perjurer. But in a country where mendacity in political and public life is rife, perjury is scarcely seen as a serious misdemeanor. So Singh could continue without any scruples with his approach of, what Baru calls, “a combination of active morality for himself and passive morality with respect to others.”

It’s a quintessentially Indian approach: my morality—just like all my concerns in life from sanitation and etiquettes to values and salvation—remains within the boundaries of my household. My morality is personal, almost isolated from the world surrounding me; it could have been the morality of Robinson Crusoe.

This morality may be appropriate for a private citizen, but not for somebody who holds the most important office in the country. But, writes Baru, “Dr Singh’s general attitude towards corruption in public life, which he adopted through his career in government, seemed to me to be that he would himself maintain the highest standards of probity in public life, but would not impose this on others.”

The point is that it was not a question of imposing his own morality on others; it was the question of being true to the oaths that he had taken in all solemnity. It was expected of him that he would not allow any wrongdoing; it was his right and duty to observe the oaths in letter and spirit. He failed inexcusably in his duty; he blindly followed the diktats of Sonia Gandhi and her henchmen and activist buddies all of whom were determined to undermine institutions, enact illiberal and socialistic laws, jeopardize the economy, aid Maoists, encourage jihadists, and execute scams of humongous proportions.

Baru writes that Singh “was himself incorruptible, and also ensured that no one in his immediate family ever did anything wrong, but he did not feel answerable for the misdemeanors of his colleagues and subordinates. In this instance, he felt even less because he was not the political authority that had appointed them to these ministerial positions. In practice, this meant that he turned a blind eye to the misdeeds of his ministers. He expected the Congress party leadership to deal with the black sheep in his government, just as he expected the allies to deal with their black sheep. While his conscience was always clear with respect to his own conduct, he believed everyone had to deal with their own conscience” (emphasis added).

Expecting the Congress party leadership to act against corruption is like hoping that the Taliban would become pacifists; obviously, Singh would not have been unaware of the impossibility of his expectation. Yet, “his conscience was always clear”! More funnily, “he believed everyone had to deal with their own conscience.” Even if the “everyone” concerned was unconscionably venal! Singh seems to be unaware of many old-fashioned concepts like the sanctity of oath and fiduciary responsibility. The only traditional virtue he has heard of is loyalty—not to the nation, the Constitution, the rule of law, and the law of the land but personal loyalty. Loyalty to Sonia Gandhi.

He had reasons to be loyal to her, for it was she who chose him for the top office. The question, however, is: should that loyalty that eclipsed all concerns related to statesmanship, governance, fiscal prudence, economic development, justice, and liberty? The answer is a big ‘no,’ but this is exactly what he did. In his 10 years as Prime Minister, Singh did everything to reduce statesmanship and governance to mindless populism, boost fiscal profligacy, torpedo development, shield crooks, and assail citizens’ freedoms. His devotion to Sonia was uncritical; many found it doglike; a British newspaper called him Sonia’s “puppy.”

On an important point of disagreement with his teacher Plato, Aristotle once said, “Plato is dear to me, but dearer still is truth.” It pains me to inflict the ignominy of comparison on Aristotle: one of the greatest philosophers of all time cannot and should be compared with a pygmy like Singh. But, except for the 2008 Indo-US civil nuclear deal, he never told Sonia, “You are dear to me, but dearer still is the nation.” Whenever she asked him to bow, he would crawl.

Singh’s culpability in UPA’s misrule, which caused mammoth loss to the nation and the people, is stupendous. A lower division clerk in a government office bemoaning corruption and incompetence in government is understandable; but there is no excuse for the top boss to lament about unscrupulous practices and inefficiency. And when that boss happens to hold the highest office in the world’s largest democracy, the culpability becomes unforgivable.

In fact, Manmohan Singh cannot even cite the dubious doctrine of ‘superior orders.’ This was the most famous defence of many a Nazi during the Nuremburg trials for crimes against mankind. The accused would say, “I was just following the orders.” This defence was rejected. Eventually, the principles of international law were recognized in the Charter of the Nürnberg Tribunal and in the Judgment of the Tribunal. According to Principle IV, “The fact that a person acted pursuant to order of his Government or of a superior does not relieve him from responsibility under international law, provided a moral choice was in fact possible to him.”

Even if we accept the superior orders doctrine as valid, even this cannot absolve Singh of his sins of omission and commission. The reason is that he was following the orders not of a superior in hierarchy; none has existed during his prime-ministership. The orders came from somebody who was not in the hierarchy in the first place. Singh always had the moral and honorable choice: resignation. Moral because this would have freed him of doing things he knew were wrong; and honorable because by resigning he would have remained faithful to Sonia. But he never exercised the moral choice; he preferred to wallow in the sleaze called UPA government.

Bhishma could have hidden behind some variant of superior orders, but Singh can’t. It needs to be mentioned that Bhishma’s inaction during Draupadi’s stripping earned him Lord Krishna’s disapproval.

Manmohan Singh has presented a big challenge to the savants of jurisprudence, political science, and ethics. Can a political leader tear apart the constitution he swore on, and yet not attract any charge of malfeasance? Can the chief political executive occasion untold harm to governance and economy, and plead innocent? Can a man preside over the most corrupt regime in the history of modern India, and claim to be moral?

In Singh’s case, there was no power, just its mirage; and, if Baru’s version is anything to go by, Singh knew it too well. And, apparently, he never had any qualms of being the puppet of an evil dispensation—that of Sonia Gandhi. The evilness became even darker because the executor, Singh, knew about the intentions and policies of the de facto ruler. Singh was like the executioner who didn’t believe in death sentence. Every assignment he carried out should have pricked his conscience, but it didn’t. Baru informs us that Singh’s “conscience was always clear.” I wonder what kind of conscience Singh has.

I also wonder what kind of consciousness he has; is it real or delusional? In January this year, he told the media, “I honestly believe that history will be kinder to me than the contemporary media.” He is wrong on two counts. First, journalists are very kind to him for a variety of reasons, not least of them being ‘paid news,’ Rajya Sabha membership, Padma awards, etc., to media Moghuls and bosses; in a proper democracy, where the insidious Nehruvian controls don’t exist, he would have been hauled over the coals. Second, history will be very harsh, for PR gimmicks and dirigiste tricks have no influence on posterity.