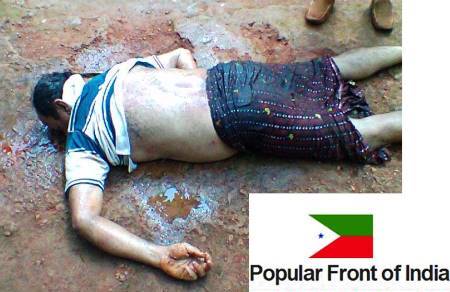 In a horrific episode that should shock and shame all of us, Karavali Ale (a Mangalore-based Kannada newspaper) journalist V.T. Prasad was savagely attacked by about 35 members of the Karnataka Forum for Dignity (KFD) and left to die. The barbaric incident occurred on 27 November 2013 in Barebettu in Kolnadu village near Mangalore.

Highlights from the report on this ghastly incident, carried by the Canara Times are as follows:

V.T. Prasad, the Karavali Ale Correspondent in Vittal, was brutally assaulted by a gang of around 35 KFD activists on November 27, Wednesday for the sole reason that he had published a human interest story on the travails of a poor Muslim woman and had also come forward to assist the woman to construct a house with the help of contributions from donors…Haleeema, a resident of Barebettu in Kolnadu village was residing in a crumbling house with her two kids. On noticing the pathetic state of the family, Subhash, the former president of Kolnadu GP and a local social activist Dawood had brought the matter to the notice of Karavali Ale and VT Prasad had published a report about the plight of the family, on humanitarian grounds…Several generous donors had come forward to help the woman after reading the report. The owner of Karnataka Mill of Mangalore had even offered wood worth around Rs 70,000 free of cost…Prasad has suffered serious injuries on his head, chest, waist and leg as the assailants have kicked him severely after hitting him with wooden clubs.

What followed this makes for queasy reading:

“On November 27, Wednesday, wooden works were underway in the woman’s house. As the labourers said they need ‘mud oil’ for the beams, I had provided it and returned home. Later I had left for the meeting of the annual day celebrations of a school located near our house. At that time, I received a call to my mobile from Siddique Kelagina Badebettu asking me to come near the house of the woman. As soon as I reached there, around 30-35 assailants who arrived by autorickshaw and bikes, began abusing me in singular and questioned me saying “ Who are you to repair the house of Bearys [Muslims]? What has a Bhatta [Hindu] to do whatever may be the condition of Bearys? And they began to hit me with wooden beams, clubs and whatever they could lay their hands on. Later I fell unconscious. I feel the assailants asked me to come there with an intention of killing me,” said Prasad.

Journalist Prasad’s fault? He explains it himself:

…the KFD goondas had come to me [on an earlier date] and questioned why I should take up the repair works of a Muslim woman’s house and questioned whether there aren’t Bearys for the purpose. They also asked me not to interfere in Beary issues. I told them that there is no question of caste or creed here.

However, Prasad’s ordeal didn’t end at just being brutalized so severely:

When the Friends Vittla ambulance had arrived to shift a critically injured Karavali Ale’s Vittal correspondent VT Prasad to the hospital, the goondas who were present at the site obstructed the ambulance staff saying ‘ That Bhatta should die here itself. Do not take him. He should not help any Beary in the future.” Even as the ambulance staff had placed Prasad in a stretcher inside the ambulance, the assailants had threw him out resulting in serious injuries.

Graphic of Karavali Ale reporting the attack on its staff, Prasad

What is the Karnataka Forum for Dignity (KFD)?

The KFD is a member of the notoriously radical Jihadi umbrella organization, the Popular Front of India (PFI). Among its other “achievements,” KFD was engaged in the kidnap and murder of two engineering students in Hunsur near Mysore in 2011. Back then, the Karnataka Government had considered banning the outfit.

Notice the poster showing the link between PFI and KFD. Image courtesy: The Hindu

KFD’s radical posturing and activities is public knowledge in the South Canara region of Karnataka. Over the past decade or so, the pace at which Jihadi activities have continued to escalate in this region has worried not just the locals, but intelligence agencies as well. The notorious Yasin Bhatkal hails from the coastal town of Bhatkal near Mangalore. Indeed, even as recently as last month when bomb blasts rocked Narendra Modi’s Patna rally, intelligence agencies found a link to Mangalore.  Thus, although they are shocked and outraged, this gruesome attack on the hapless and well-meaning journalist by the KFD cadre does not surprise too many people in the region.

However, the greatest outrage must be reserved for the media which it appears, deliberately suppressed reporting this appalling incident. Not one mainstream paper or news channel carried this report, even six days after the episode occurred. And this apathy when a journalist, a member of the media’s own fraternity, was nearly murdered by Muslim fanatics for helping out a destitute Muslim woman–someone from their own community.

Contrast the media’s behaviour during the 2009 Mangalore pub attack. The who’s who of the national media descended upon Mangalore and gave unnecessary mileage to a fringe outfit named Sri Rama Sene. In fact, Sri Rama Sene had informed the media in advance that it was planning the attack. However, instead of alerting law enforcement, the media waited in anticipation for the attack and when it took place, promptly gave it coverage grossly disproportionate to the seriousness of the issue.

However, in this case, all we hear is radio silence. Is the act of moral policing a more dangerous incident than the spread of radical jihad and the near-murder of a journalist?