MEDIA WILL SUPPORT YOU ONLY IF YOU’RE MUSLIM 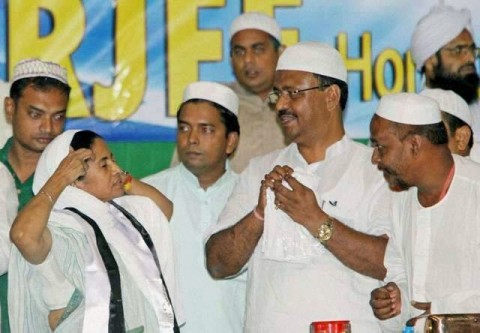 A few days before the force-feeding controversy erupted, The Dawn of Pakistan had carried a news story highlighting the plight of Hindus over there. It described in detail the problems Hindus face in a village near Chakwal, a city 90 km from Islamabad. While a large number of people are gentle, the Hindus told the Dawn reporter, there are also hostile glances and desecrated temples. The news story was not even discussed by any politicians, even from the ruling Bharatiya Janata Party (BJP), the so-called Hindu fundamentalist outfit.

“An estimated one thousand Christian and Hindu women are forced to convert and marry Muslim men in Pakistan every year,” the same newspaper reported in April this year. “According to a report by the Movement for Solidarity and Peace in Pakistan, up to 700 of these women are Christian and 300 are Hindu,” said the news story. It quoted the authors of the report, saying, “The true scale of the problem is likely to be much greater, as a number of cases are never reported or do not progress through the law-enforcement and legal systems.”

Again, our netas were not moved by the misfortune of those girls. But they were taken aghast when a remark was made about Sania Mirza. You have to be a Muslim to get the support of Indian politicians, as also of the Indian media.

Humiliating a man and forcing a morsel into his mouth is bad behavior anyway, especially if the perpetrators are lawmakers; the faith of the victim is immaterial. At any rate, the incident was not of such importance as to warrant so much attention of our honorable members Parliament. And, from the perspective of news channels, it was not of such gravity that for hours on end debates should conducted. The debates looked particularly silly because Shiv Sena leaders are quite notorious for boorishness and hooliganism. Yet, this is exactly what happened. Only one term describes the entire episode—dumbing down, of political debate as well as of media.

Dumbing down seems to be the fraternal twin of the Indian version of politician correctness—the tendency of politicians and media to deny or downplay anything negative about Islam and Muslims. The mother of the twins is dishonesty, moral as well as professional; it plagues public discourse. When you don’t want to get to the bottom of any issue, when you are afraid of ‘hurting the sentiments’ of some community or another, and when you are desirous of seeking applause from the self-appointed upholders of good taste and public morality, you inevitably indulge in disingenuousness in matters of general interest.

So, Congress vice-president Rahul Gandhi reacts to the force-feeding of the fasting Muslim employee of Maharashtra Sadan in New Delhi as saying, “It is the ideology of BJP, Shiv Sena. Politics of bullying people is what they do. This is extremely damaging to the country and this [is] what we fight against every day.” One act of haughty, short-tempered Parliamentarians discredits the political philosophy of the ruling party! A number of Opposition MPs, too, reacted came to similar conclusion. In a letter to Lok Sabha Speaker Sumitra Mahajan, they said, “The incident turns much controversial and inhuman as the victim of this barbaric act is a Muslim who is fasting during Ramzan.”

This reeks of political correctness: the incident is “much controversial and inhuman” because the victim is a fasting Muslim. Also notice the hyperbole: a minor act of highhandedness becomes a “barbaric act.” The same Parliamentarians did not utter a word when The Times Of India reported on July 4 about “the abuse and exploitation of Indian migrant workers in Gulf and Arab countries.”

Many of the migrant laborers are forced to get into the kafala system, which mandates the monitoring the construction and domestic migrant laborers in Gulf countries and which results in the confiscation of their passports by employers. According to a 2008 Human Rights Watch report, “an employer assumes responsibility for a hired migrant worker and must grant explicit permission before the worker can enter Saudi Arabia, transfer employment, or leave the country. The kafala system gives the employer immense control over the worker.” Further, “some abusive employers exploit the kafala system and force domestic workers to continue working against their will and forbid them from returning to their countries of origin.”

The system, HRW said, “made some employers feel entitled to exert ‘ownership’ over a domestic worker.” This “sense of ownership… creates slavery-like conditions.”

Saudi Arabia is particularly notorious for its disregard of the UN Universal Declaration of Human Rights. It willfully violates the religious freedoms of non-Muslims. A few months ago, it even barred 50 names that parents can choose to name their children; Ram and Maya figured among the proscribed names. I don’t remember any Indian politician or commentator slamming Saudi Arabia for such outrages.

Dumbing down and political correctness go hand in hand.