A Memo about Women in Mahabharata 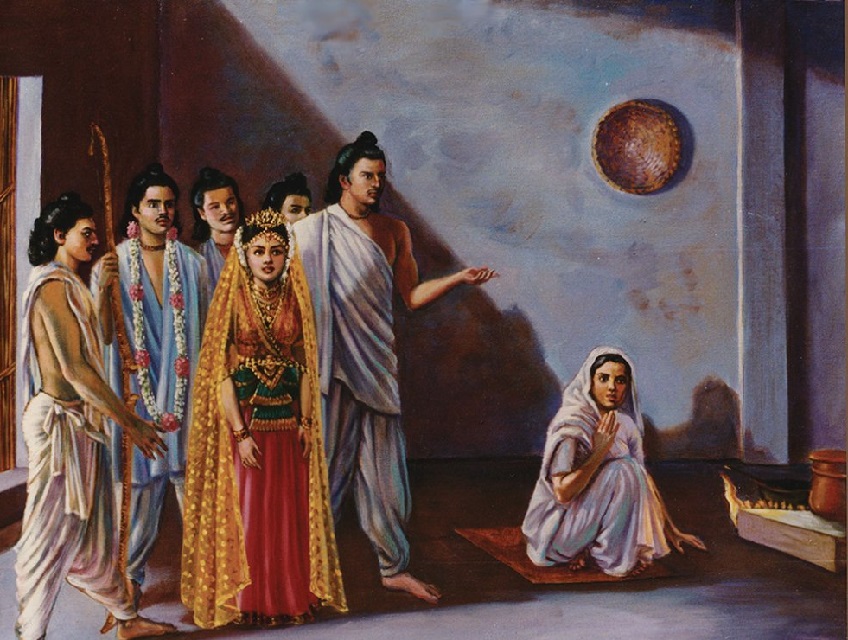 A recent controversy has erupted in Google with an employee writing an internal memo against gender diversity and equality. Its now known as the anti-diversity memo. This memo was 10 pages long and has been going viral on social media. Google has fired the employee and the VP of Diversity, Integrity and Governance has issued a statement on Google’s commitment towards diversity and inclusion.
To summarise, the memo by the employee had brought out the differences in capabilities and preferences of men and women, which did not go well amongst other employees in the organization. The memo had things like “Women prefer jobs in artistic or social areas… Extraversion expressed as gregariousness rather than assertiveness…they exhibit higher level of stress and anxiety” etc. The letter looked very stereotyped though its intention was to highlight how biases exist and how they can be removed. The internet is debating if the views expressed were right or wrong.
In this context, it will be relevant to look at some inspirational women from the Mahabharata, who have broken away from these stereotypes. Indian history is replete with stories of great women, right from the Rishikas to modern CEOs. However, the women in the Mahabharata bring a unique dimension by being at the center of important turning points in the history of the Kuru lineage. This article is not a rebuttal to the memo but throws light on the multi dimensional capabilities of women through some classic examples.
The memo by the Google employee mentions how women prefer artistic jobs to typical professional ones. The letter added that women find it difficult to reach top leadership positions because of their attitude and lack of drive.
In the Draupadi-Satyabama-Samvada parva of the Vana Parva of the Mahabharata, there is an interesting conversation between Satyabama and Draupadi during the exile of the Pandavas. Satyabama, the wife of Krishna, with love and curiosity enquires how Draupadi manages to keep the Pandavas devoted to her. She asks whether Draupadi has been successful through vows, or incantations, or beauty, or any specific medicaments. Draupadi, a woman of high self-esteem, is a bit angered at Satyabama’s enquiry. She elaborates on her daily activities that she performs with utmost devotion and care. Here are some of the things she lists:

Through these, did Draupadi earn the respect and devotion of the Pandavas. Hearing this, Satyabama apologizes for the inappropriate question.
This conversation beautifully brings out the multidimensionality of activities that Draupadi performed. Her role was not just limited to stereotypical household activities, but combined complex activities of the kingdom. This shows her superior physical, emotional and cognitive capabilities.
The memo says that women find it harder to negotiate for salary or rises and in general have poor negotiation capabilities. This is something the Mahabharata will never agree. Several women in the Mahabharata including Satyavati and Ganga have been strong and tough negotiators.

When Yudhisthira had staked his brother and then Draupadi, a messenger was sent to Draupadi to summon her to the Kuru court. Though enraged, she had the strength to ask the right questions: “ask that gambler present in the assembly, whom he hath lost first, himself, or me. Ascertaining this, come hither, and then take me with thee”. She also put forth this question in the Sabha and questioned the silence of all the elders present there. At the end of the unfortunate incident of vastraharana, looking at the rage of Draupadi and the other Pandavas, Dhritarashtra offered to give a boon to Draupadi. Draupadi asked for the freedom of Yudhisthira. When offered a second boon, she demanded the freedom of the other Pandavas. When offered a third boon, Draupadi refused to demand anything as she considered it greed to ask for more than what was needed. Draupadi had the strength and will, in spite of the harsh treatment that she was subject to, to reason out properly and do what was needed.

Amba is a great example of how women can take a resolve and accomplish it despite obstacles. Amba was the daughter of the Raja of Kasi. She and her sisters were brought by Bhishma’s power. They were under tremendous pressure to marry Vichitravirya. Ambika and Ambalika agreed but Amba made it clear that since she had chosen the King of Shauba as her husband and it was not fair to ask her to marry Vichtravirya. Rejected by King of Shauba and unable to marry Bhishma or anyone, Amba was dejected initially. But she resolved to settle the matter. It is said of her that “entering a cluster of retreats practised austerities, that were beyond human powers (of endurance). Without food, emaciated, dry, with matted-locks and begrimed with filth, for six months she lived on air only, and stood unmoved like a street-post. And that lady, possessed of wealth of asceticism, foregoing all food in consequence of the fast she kept, passed a whole year after this, standing in the waters of the Yamuna. Endued with great wrath, she passed the next whole year standing on her front toes and having eaten only one fallen leaf (of a tree). And thus for twelve years, she made the heavens hot by her austerities.”. She got a boon from Rudra that she would attain the form of a man and slay Bhishma. She was reborn as Shikandin, the daughter of Drupada and then became a man to accomplish her mission. She played a significant role in the slaying of Bhishma in the battle.

The memo adds that women show higher levels of neuroticism and low tolerance to stress. The women in the Mahabharata demonstrate a blend of emotion and level-headedness. They exhibit well-balanced emotions and adopt a very humane approach to dealing with situations. Maa Ganga, in order to fulfill the responsibility of liberating the Vasus, made her demand clear to Shantanu that her actions were not to be questioned. She set afloat seven of her children in spite of bearing them in her womb. She placed duty and responsibility above her motherly emotion. When stopped by Shantanu, she had to leave him as per their agreement. She took care of Bhishma and ensured that he would receive the best of education in his formative years.

Again, the memo claims that women are more open to feelings than ideas. Satyavati can be seen as a very practical woman. It is easy for one to jump to a conclusion that she was a selfish woman. But the more we read about her, the more pragmatic she appears. She had two children, Chitrangada and Vichitravirya through Shantanu. Chitrangada died early in his life and Vichitravirya too succumbed to a disease. With the onus of making a decision on the future of the Kuru lineage, she was open to the idea of asking Vyasa (her son through Rishi Parasara)  to beget children though ambika and ambalika. Towards the end of her life, she quietly recedes into the forest and leaves her body.
There are inherent differences in the capabilities of men and women and there is also a need to protect and nurture these positive differences, but both men and women from time immemorial have demonstrated that they can step out of stereotypical roles comfortably and Mahabharata brings this message home again and again.
Disclaimer: The opinions expressed within this article are the personal opinions of the author. IndiaFacts does not assume any responsibility or liability for the accuracy, completeness, suitability, or validity of any information in this article.