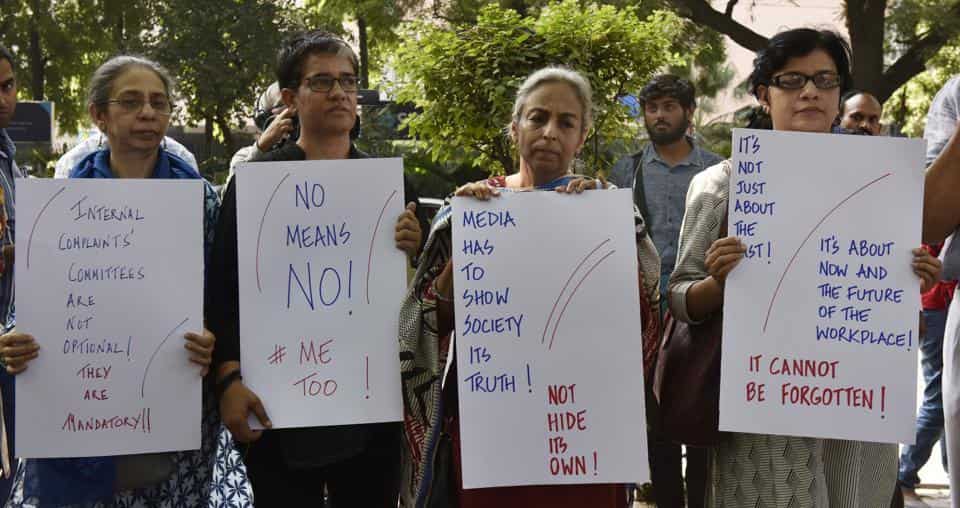 MeToo movement in India has been celebrated in mainstream media as a defining moment in the history of women in general and the shared experience of Indian women in particular. While being sympathetic to many such articulations, I have my doubt towards this paroxysm of public naming as a gateway to retributive justice. What is problematic in this wave is its seamless relocation to Indian reality, its reductionism and its uncritical celebration of individualism, though these issues do not find mention in journalistic and intellectual discourses of the present time. Proper contextualization of the movement and a little reflexivity in media representation can help us rise above clichéd expressions that have become the hallmark of available liberal narratives. The objective here is not to dismiss the movement’s promise but to scrutinize its claim to be a great awakening and in the process subject it to critique so that taken for granted realities can be seen as constructs, orchestrated by prevailing cultural and intellectual norms.

During my last visit to my hometown in the hinterlands of Odisha, I came across MeToo stories in local newspapers, though they were hardly given the prominent coverage so common in English language papers. The local newspapers just copied the English expression in Odia script (which sounded like Mithoo) leading to some sort of mystique around the term, which people thought refers to a bad guy or some kind of trap. Prodded by my neighbors (all were men) to explain, I gave a brief lecture on the origin of MeToo in the USA, Weinstein affair and their echo in Indian workplaces, particularly in Bollywood.

Not everybody understood, and one elderly enthusiast explained saying that Mithoo looks like a situation peculiar to Bombay and Delhi, and another unimpressed acquaintance believed that some elderly people should counsel Methoo not to misuse his education and job. If I decided not to correct their impression, it was not just because I was unsure about my ability to explain sexual harassment in the present context, but also because of my doubt about the carrying capacity of MeToo to reflect local, rural and vernacular experiences. What my neighbors in their naivety actually wanted to convey is that it is the available vocabulary and media, which have helped create this movement and in turn have sustained a demand for such stories. To use the language of electoral politics, there is a hawa for such content.

As a category of women’s experience, MeToo is conceived elsewhere with socio economic conditions peculiar to that place. The prefixing of # excludes people not exposed to the icons of social media and that makes the problem of workplace harassment a problem of urban centres. Seeing women’s experience through MeToo has its momentary kick that connects Indian women with their Western sisters, but that cannot wish away the fact that there is a chasm of difference between the epistemic and material experiences of these women and their histories. For decades, we have tried to force-feed imported categories such as modernity, history, secularism etc. to understand ourselves leading to the alienation of the very people we wanted to represent or rescue. MeToo is a Western derivative that reduces Indian women, limits their diversity and trivializes their material experiences.

But does MeToo make its users any less woman? It does not, but what it does is problematic. It seeks to standardize women’s experience and promotes a universalist understanding of womanhood. That is to say, it creates a category of Woman, who is agentic, educated, enlightened, empowered, urban dweller and English speaking who defies patriarchy in the work-place. Or she may choose to keep quiet even if a relationship is overtly oppressive and unequal, perhaps because it pays to keep quiet, at least until the victim becomes big and famous. All MeToo revelations are thus subsequent to some sort of complicity, something pejoratively called patriarchal bargain, wherein a woman suffers in the beginning knowing that this endurance will make her an authoritative figure later.

In a way MeToo creates a virtue out of earlier complicity and silence thereby distinguishing this agentic Woman from those multitudes of women who not only suffer in silence outside media glare but also shout and scream while resisting violence and in the process get raped or/and killed. While providing a forum to victims of work-place harassment, MeToo cannot appreciate those women who actually resisted molestation real time, then and there, and came out victorious, or if unlucky, became victims of acid attack or some such thing. MeToo thus glamorizes certain types of victim behavior, those who ‘adjusted’ at one point of time or did not have the courage. It also uses Woman as a coherent category and has not much to offer to those who do not work outside home or those who did not keep quiet.

All these make MeToo a limited experience, where career women trying to break through the glass ceiling can be the protagonists. The ubiquity of their stories in English media creates an impression of victimhood as the foundation of feminist subjectivity. That renders MeToo an elitist enterprise and unredeemably narrow in scope to capture women with diverse/different experiences. If we may say so, it is for urban working class women who make use of silence to further their career, and not their rural uneducated sisters who have the courage to fight back. But as I have said already, this does not make MeToo unreal; just that it has a tendency to universalize educated urban women as Woman.

MeToo also betrays its own weakness to champion individual liberty and makes this liberty the be all and end all of contemporary society and its politics. In typical liberal fashion, it keeps the individual self (the me in MeToo) as the career of liberty. In the background we have centuries old idea of the individual as the source of knowledge and a carrier of rights as in Enlightenment philosophy, libertarianism, cosmopolitanism and their modern Indian counterparts. The Indian Constitution also epitomizes the philosophy of protecting the individual from all forces of the collective, unless one belongs to minority communities and is ‘empowered’ by community laws (Articles 25 to 30 of the Indian Constitution).

Interestingly though what we are witnessing now is a collective carnival of public naming instead of seeking justice through judiciary. What explains the whole project of naming and shaming, which demands instant justice and turns the foundation of modern justice delivery system on its head? What about the new Internet lynch mob, which asserts its own logic (through mainstream media, select activists and academics who create a buzz around various tweets) to replace the judiciary.

Not long ago, feminists argued that a woman’s body is her own and cannot be overwritten with communitarian/patriarchal meanings. They had problem with patriarchal sense of womanhood or familial demand for kids since such demands took away the rights over one’s own body. Now MeToo brings back a body whose violation must be condemned by the community, the same community, which was written out in the name of patriarchy. What is painfully evident here is the inability of that individualist philosophy to be the locus of justice. The fact that one chooses to shame a perpetrator to derive sympathy for a past humiliation implies that it is community (of any kind), which will provide justice to the victim and ensure the loss of reputation for the predator.

If in rhetoric, MeToo centralizes the individual, in reality it makes community, the extra-individual and the collective the justification of the individual. One may still argue that the community is complementary to the individual. But then, why MeToo and why not WeWomen or HumNari? Proper representative naming perhaps can tell us if we are dealing with a national shame or stray cases of individual transgressions.