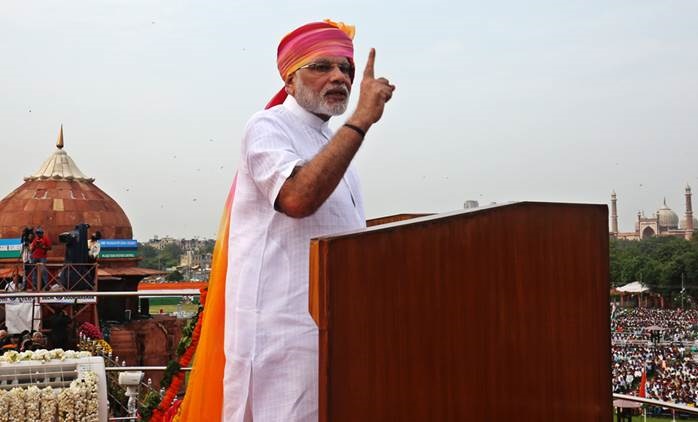 Prime Minister Modi has announced a tectonic shift in the structure of India’s dealing with Pakistan on the Kashmir issue. Instead of pussyfooting with lunches and bear hugs, which have brought us only a thousand cuts and more, he has decided to pin down Pakistan on its perennial suppression of the people of the so-called Azad Kashmir (AK) which, along with Gilgit-Baltistan to its north that India has dubbed as Pakistan Occupied Kashmir (POK).

For too long have Indian politicians brainwashed us to believe that all the unrest in Jammu & Kashmir State (J&K) was being caused by our inability to prevent the alienation of the Kashmiri people. Now, PM Modi wants to throw away that bogus big cross and speak a totally different story. For too long, India has succumbed to the beguiling strategy of “Kashmiriyat, insaniyat and jambooriyat” to win over our own people in the Kashmir Valley and to apply a thousand load-full of balms to their so-called wounds of the last 70 years. Now, PM Modi has announced a historic step to turn all that around.

Go back to history. In spring 1947, an uprising against the Maharaja of Jammu & Kashmir State broke out in Poonch, an area bordering the Rawalpindi division of West Punjab. The Maharaja’s administration was allegedly levying punitive taxes on the peasantry, which provoked a local revolt and the administration resorted to brutal suppression. The area’s population, swelled by recently demobilized soldiers following World War II, rebelled against the Maharaja’s forces and gained control of almost the entire district. Following this victory, the pro-Pakistan chieftains of the western Jammu districts of Muzafarabad, Poonch and Mirpur proclaimed a provisional Azad Jammu and Kashmir (AJK) government in Rawalpindi on 3 October 1947.

The territory, commonly called Azad Kashmir (AK), has a total area of 13,297 square kilometres (5,134 sq mi), with an estimated population of around 4.6 million people. Along with Gilgit-Baltistan’s area of 72,496 square kilometres (27,991 sq mi), these two territories together is estimated to equal half of what Indians so lovingly refer to as Jammu & Kashmir (J&K).

Hence, this political entity of POK was thrust on us by one of the cruelest ironies of history. It came about only because of one among us.

Just two months and a week after we attained Independence from the British rulers, Pakistan invaded our land in the garb of “tribesmen”, who succeeded in reaching Srinagar, ravaging the citizens there and raping their women. A bitter war soon emerged even as the refugee problem sapped our nation. However, by the end of 1948, India’s armed forces were ready to crush the Pakistani forces, which were losing everywhere, without resources in reserve. India was close to victory, but Prime Minister Nehru refused permission to Major-General Thimayya to move into Muzzafarabad and win back India’s lost territory. Instead, on January 1, 1949, the Nehru government declared a unilateral cease-fire — without a bilateral cease-fire agreement required to comply with the United Nations’ Security Council’s Resolution 47 of April 21, 1948. Significantly, the bilateral agreement on the issue came on the very day India played the good boy! Thus, India had lost a golden opportunity to wipe off “Azad Kashmir” from the map of the world.

Worse, both India and Pakistan failed to arrive at a UN-proposed truce agreement due to differences over interpretation of the procedure and the extent of “demilitarization” proposed in the above UN Resolution. And a cardinal sticking point was whether the “Azad Kashmir” army was to be disbanded as part of that demilitarization, which was a pre-condition to the holding of the Plebiscite in J&K, which was the ultimate aim of that UN Resolution.

That plebiscite stage never came about because of Pakistan’s refusal to withdraw its forces from the entire J&K territory (as required by the said UN Resolution).

It must be noted here that India’s complaint dated January 1, 1948 to the UN to mediate over Pakistan’s aggression in forcefully entering Indian Territory in October 1947 was made under chapter VI of the UN Charter, wherein the Security Council Resolutions are considered non-binding and have no mandatory enforceability as opposed to the resolutions passed under Chapter VII. Consequently, Pakistan went unpunished, totally scot-free, for not acting according to the above UN Resolution. Was it not a result of another blunder committed by ‘Pandit’ Nehru in his short-sightedness?

As a result of this blunder, “Azad Kashmir” exists even today in August 2016, and continues to mock us and haunt us. And that is why Prime Minister Modi wants to use it to put Pakistan on the back foot in a way it has never been before.

And he has a lot of ammunition to do that.

First of all, POK is a stolen property, stolen by treachery, from the Maharaja of Jammu & Kashmir, who, according to international law, owned the entire territory, including what is called today POK, and who assigned it to the Dominion of India by a legal deed on October 26, 1947 created by the British Independence Act of 1947. And no country, civilized or otherwise, has the right to hold on to stolen property. It must come back to India.

Second, even after 70 years of the humongous theft, 4.5 million people living in POK have received nothing but misery. If only the United Nations or the International Human Rights Commission were allowed to study the miseries of the people and the travesties of administration and governance in POK, it would shame the thief as well as the rest of the world. Below is a stunning excerpt (edited for brevity) from a recent article in “The Analyst World” titled “Neither Azad nor Kashmir”:

“Theoretically, Azad Jammu & Kashmir (AJK) is a self-governing state under Pakistan’s control, the general public opinion and sentiment in POK reflects that ‘although ‘azad’ means ‘free’, the residents of Azad Kashmir are anything but free. The Pakistan authorities govern Azad Kashmir with strict control on basic freedom and liberties’. The Supreme Court of Pakistan itself has admonished Islamabad’s oppressive, undemocratic and colonial subjugation of the POK residents. It has been acknowledged by the global community as well. The residents are barely 20 percent Kashmiris, the rest being Punjabis. Development wise, POK has a minuscule per capita income of Rs 1,802 compared to J&K.’s average of Rs 2,700. There is an acute shortage of electricity, water and basic amenities in the region.  The problems of poverty, illiteracy, unemployment and poor health care are aggravated by religious fundamentalism, inter-faction feuds and terrorism, which have created an atmosphere of doom and gloom in the resource-rich POK, which is being exploited by Pakistan.  There is growing unrest and resentment in residents due to imperial nature and indifferent attitude of Pakistan regime towards POK.  In short, “Azad Kashmir” is neither peopled by Kashmiris, nor is it Azad.  Anjum Nisar Mir, the leader of Awami National Party recently stated in a public rally that “people in Azad Kashmir are not free but slaves.”

To the above, the said article’s author, Sahil Mushtaq, adds “an ongoing struggle for power and resources sharing between Pakistan Army, ISI, fundamentalist organizations and corrupt politicians in the region… rampant human rights abuses, ranging from target killings, forces disappearances, torture to political repression, electoral fraud and suppression of freedom of speech.”

Hence, the Prime Minister must continually tell the POK citizens about how we, in our J&K, have given “our Kashmiris” a central medical hospital, national education institutes, etc. and have treated everyone there, including opportunistic and selfish separatists, with equality and sympathy. We don’t ever steal the property of others and then crow about it. Such a message must henceforth go all over the world so as to prevail upon Pakistan to quickly return “our Kashmir” to us peacefully, like a civilized country, instead of provoking us with slogans of “Azadi for J&K”, and supporting and nurturing professionals, who pelt stones, throw grenades and fire AK-47s at “our Kashmiris” every other day. Yes, “Azad Jammu & Kashmir” is a massive fraud, the earliest and the worst example of its kind, which must now be made to vanish as soon as possible.

And finally, there is Pakistan’s bloody Balochistan. An independent entity ruled by the Khan of Kalat, which was then forcibly occupied by the Pakistani army in 1947, violating international norms of sovereignty. Since then, it has seen a continuous freedom struggle led by the Baluch National Army, in which thousands of innocent civilians, including women and children have been known to be mercilessly butchered by the Pakistani army. Reports say that every year, thousands of local civilians disappear. Later, their dead bodies are recovered from the road side with bullet holes in their heads, making clear the fact that they were shot at point-blank.

Having just the other day decided to give up the velvet glove for one of iron, our Prime Minister must now warn Pakistan not to blame us for what’s happening to the Balochis. This too must be repeatedly highlighted by us on all international forums. That the Balochis protested on Pakistan’s Independence Day this time and burnt the Pakistan flags tells its own story. Lying on all issues and sending terrorists into our country is not civilized behaviour.

And finally, dear Prime Minister, please give an iron glove to Ms. Mehbooba Mufti as well. The Chief Minister of our J&K must be told unequivocally that Vajpayee’s sweet pills of Kashmiriyat, insaniyat and jambooriyat brought us only the Kargil war. That mantra has long past its expiry date, if at all it ever had any magical power to cure the sick minds of the Hurriyat, the separatists and others of that evil ilk.