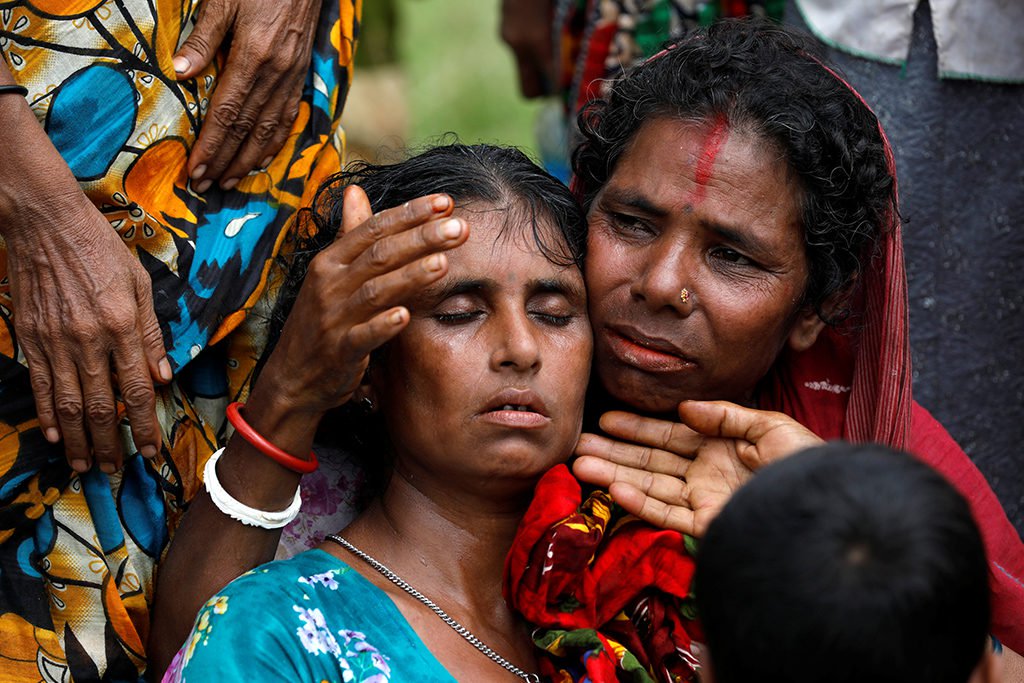 A Muslim impostor named Shadab, pretending to be a Hindu Siddhant Choudhary, deceived an adolescent Hindu girl by making false promises, and convinced her to elope. This was a planned case of love jihad where the Muslim person had developed pro-Hindu social media presence to entice Hindu women.

A Dalit girl from Mainpuri, UP was abducted by a Muslim named Junaid, raped, forcibly, converted to Islam and then married off in Delhi and then held in captivity. The culprits were looking to sell the girl for human trafficking.

A Dalit woman Sumitra, a resident of Pathanpura Mohalla in Najibabad, UP was abused and then attacked by a Muslim man Shakeel (son of Sharif Ahmed). Later a mob of Muslims pelted stones at her house.

A Muslim dance teacher Azad Hussian, pretending to be a Hindu with the name Azad Bhardwaj, lured a minor girl under false pretenses, held her captive and raped her for 6 days. He was later arrested and the girl rescued from Delhi.

Saraswati Puja is a compulsory holiday in all schools in West Bengal. However Uttar Dinajpur primary school board chairman Muhammad Zahid Alam Arzu and Secretary Aminul Ahsan, scrapped Saraswati Puja from the Holiday schedule for January 2018.

A 15-year-old Hindu girl was abducted by her 3 Muslim neighbors of a colony in Shikohabad, Firozabad district on 15th December, 10 PM. She was held captive at an unknown place, where she was drugged and gang-raped for 10 days. Source.

Shahid Faisal, the headmaster of a primary school at Jafarkhani village in Jamalpur block in Mirzapur was suspended for allegedly beating students and preventing them from folding hand and singing Vande Matram during prayers. Source.

A minor 14-year-old Hindu girl was abducted by one Raja (aka Asif), and held captive in his house located in Begum Bagh area. For one year, the girl was regularly beaten up, and Asif forcibly married the girl after converting her to Islam and changing her name to Ayesha, who gave birth to a boy. Asif’s wife Faitma and his nephew Azhar (son of Firoz) were also complicit in the crime. Source.

A minor Hindu girl was gang-raped and then killed brutally by 3 Muslim men Mohammad Ismail, Mohammad Sharif and Mohammad Shafikul in the Purnea district of Bihar. Source.

A 23-year-old photographer Ankit Saxena, had his throat slit in West Delhi’s Raghubir Nagar by the father of his Muslim girlfriend Shehazadi, as part of a planned attack which also included the girl’s mother, minor brother and maternal uncle as they did not want them getting married. Source.

A 21-year-old nursing student Mousumi Roy committed suicide after being blackmailed blackmail by medical student Mohammed Sreyash Raj, who had obtained a private video of the girl. Source.

A Tamil Hindu girl Devi who was converted to Islam upon marriage and became Fatema, died mysteriously at her Muslim in-law’s house in Hat Vogdia village of Lohajang Thana under Munshiganj District (Bikrampur), central Bangladesh. She was often beaten up by her husband Rimu and they had a huge fight just before her death. Source.

Islamic land grabbers have illegally encroached  14 bigha (5.6 acre) of land of Dhakeswari Temple out of 20 Bigha (8.0 acre) recorded land of the temple – some of the parties involved are M/S. Azam and Momin Motors, Navana Real Estate, Gafur Khan and others, Adv. Kamal, Jinnah and Azim Consultants etc. Source.

Nusrat’s husband, a habitual drunk gave triple talaq and threw her out. Later when he wanted to reconcile with her, his father demanded Halala (marriage and sexual consummation) with her. Source.

Nikah Halala is a law that requires a woman to marry and sleep with another man in order to return to her first husband. (Indian Express)

House of a Dalit woman was demolished by Muslim men in broad daylight in Jayas Kotwali Area of Amethi and on protesting she and her family members were beaten and abused. Source.

A 14-year-old tribal girl was raped and murdered by a Muslim man in the incident took in Betsora Purbashree village in Hailakandi in Assam along the Mizoram border. The accused has been identified as Jashim Uddin Borbhuyan.

A Hindu religious procession of Shiv Baraat in Barabanki, UP was attacked by a mob of 45 Muslim extremists on 14th March using bamboo sticks and sharp weapons. The procession was being taken to Barabanki’s Lodheshwar Mahadev Temple when the attack took place and 10 people including 3 women got injured and women were molested and their jewelry was snatched by the attackers.

Four Muslim men Anwar, Pradhan Wajid Ali, Shekhu and Jahid gangraped a Hind girl in Allahabad and forced her to convert to Islam. When she refused The culprits then falsely accused the girl of mobile theft and got her jailed. Source.

Ghulam Hussain, alias Bhura raped a minor Hindu girl in in Aliganj Kotwali Area of Etah and left her unconscious on the terrace. Source.

A 45-year-old Muslim bus cleaner Sheikh Munna, dragged a three-year-old girl onto a parked bus on Canal (West) Road in north Kolkata and then raped her, even as her brother — a five-year-old — kept banging on the bus’s doors, pleading that he let go of his sister. Source.

A small-time trader of plastic goods and father of 3, Rajbir Rathod (31) a resident of West Vinod Nagar in East Delhi’s Mandawali area was thrashed while having golgappe by two drunk goons, Imtiaz and his friend. Source.

A Muslim godman and his two partners abducted an intermediate student from Aligang UP in 2015, held her hostage and gangraped her continuously for 2 years. Source.