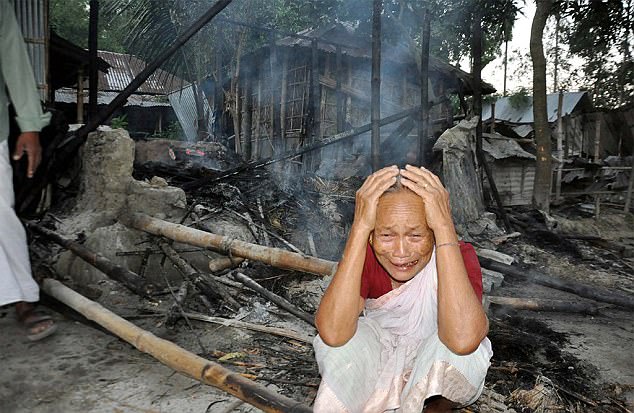 Mirza Rafiqul Haque, a Kolkata based doctor, murdered Chayanika Kumari (30), his girlfriend for refusing to convert to Islam and marry him. He then stuffed the body into a suitcase and left it at the Tata Nagar railway station, Jamshedpur, Jharkhand.

In the continuing violence against Hindus in Kerala, Anand (23) an RSS worker was hacked to death, by CPM workers at Nenmeni in the temple town of Guruvayur in Kerala.

An 18-year-old girl student was physically abused and sexually harassed by a Muslim student of Jawaharlal Nehru University (JNU), Shahnawaz Khan (29) a second year Bachelor of Arts (Honours) when the girl refused his advances.

A huge Muslim mob set fire at 30 Hindu houses in Thakurpara village in Rangpur Sadar in protest against alleged defamatory” post against Muhammad. One person was killed and many seriously injured.

In a shocking incident, a 13 year old Hindu girl in Bankura’s Lalbandh area was raped and killed in front of her 10-year-old brother by Muslim youth Abdul Rauf Khan (19).

A Haridwar girl was trapped in a love affair by a married Muslim man Ubaid ur Rehman (alias Kabir) from Muzaffarnagar who pretended to be a Hindu. She was sexually exploited for 2 years with a promise for marriage. Later when the girl discovered that he was married and a Muslim, she was beaten, poisoned and to die in an unconscious state near Hanuman chowk.

In a tweet, Rohit Sardana had asked why the word ‘Sexy’ was prefixed only to Hindu goddesses like Durga, Radha etc. and not to Ayesha, Fatima or Mary.

He immediately started receiving threats from ordinary Muslims death threats were issued against him, his wife and children via phone, WhatsApp, twitter etc.

Auto rickshaw driver Mohammed Irfan (29) from UP, and father of 4 (2 daughters), and 2 others gang raped a 21-year-old woman, and left her near a jungle near Sector 42, Chandigarh.

A 50-year-old Dalit BJP worker, Satheesan, son of Chakkanchath Kunjayyappan of Kalamuri, was hacked to death by CPI (M) activists at Kaipamangalam in Kerala’s Thrissur district.

A 14-year old disabled girl was held hostage and raped by her neighbor, Haider, in a colony in Kharkhauda police station area Meerut, UP.

Two Hindu temples were vandalized at Kadirpara village in Magura’s Sreepur upazila over a disputed related to land endowed in favor of an idol. Some people lead by Islam Sheikh carried out the attack on Radhakanta and Shitola temples. Such attacks on Hindu properties are quite common in Bangladesh.

A gang of Muslim youth in Niwai in Tonk region of Rajasthan were charged under POCSO (Protection of Children from Sexual Offences) Act for sexually exploiting minor Hindu girls, and blackmailing them with obscene mobile clips. Source.

A Muslim man who pretended to be a Hindu called Bittu, ensnared a Ghaziabad girl into marriage and then tried to force her into converting to Islam by physically assaulting her. Later when the girl escaped, came back to her parents and was getting ready for re-marriage, the Muslim man shared the previous photos and is now blackmailing her.

A college-going girl from Birbhum, West Bengal was photographed nude by a Muslim man one Sheikh Hafizul, who threatened to upload the photos on the internet. She was then repeatedly raped and later set herself on fire. Suffering 85% burn she succumbed to her injuries and died.

A Muslim mob desecrated idols and vandalized a Hindu temple, and went on a rampage in a Hindu neighborhood apparently because police stopped a tafsir mahfil (Islamic discussion) they were attending in College Para area of Alamdanga town, Chuadanga. They took out their frustration on Hindus who just happened to be nearby. This strategy has been used by Muslims to persecute Hindus for a long time.

A 40-year-old man in East Delhi’s Mandawali area, Kanti Prasad, was killed by Mehboob Ali who used a screw driver as his murder weapon.

In a clear case of Love Jihad a college going Hindu girl from Mangolpuri area Delhi, was befriended by a Muslim youth Imraan who pretended to be a Hindu called Sonu. Using deceit he locked the girl, raped her and forced her into marriage and conversion and also poured acid on her hand to remove an “OM” tattoo. Source.

Badre Alam (25), Md Ansar (18) and a minor youth, molested a 15-year-old in College Square-Cooltala area in central Kolkata. The three Muslim youths were apprehended charged under sections 12 and 17 of the stringent POCSO Act and IPC sections 354 (molestation), 354A (sexual harassment) and 114 (abettor present).

An 8-year old Hindu minor girl belonging to a daily wage-laborer family from Pune’s Kondhwa area, was repeatedly gang raped by Muslim group, the oldest of whom was 19-year-old Muslim youth Mustafa Abdul Rajaq Mujawar. The shocking incident was revealed when the girl developed rashes on her private parts and fell ill repeatedly. Source.

A 14-year old Hindu girl was abducted from a village in Thar, forced to convert to Islam and reportedly made to enter a marriage with a certain Naseer Lunjo. The family members alleged that local police, too, was not interested in recovering the girl.

Farukh Mondal, a Muslim youth of Usthi, South 24-Parganas, West Bengal, uploaded few morphed photographs of a Class IX student of the same locality on a social networking site. Unable to bear the humiliation, the girl committed suicide by hanging herself from the ceiling. Source.

According to a report in Dainik Jagran, in a clear case of Love Jihad, a 22 year old Hindu girl Kiran Kumari (22), daughter of Pardeshi Karmali from Bhurkunda in district Ramgarh, Jharkhand eloped with Aadil Ansari, son of Asgar Ali. She was pressurized to convert to Islam by her husband’s family. On refusing to convert, her husband, in laws and others, gang-raped her, slit her throat and dumped her body into the Damodar River which was found in 6th November.

A 19-year-old married Hindu woman was kidnapped from her house in the Kothara village of Sindh’s southeastern Tharparkar district by two armed men, identified as Mohammad Ali Khoso and Ali Nawaz Khoso. The girl’s family expressed concerns that the girl might be forcibly converted and married to one of the accused.