Moonshot: Why India must take the lead in the final frontier 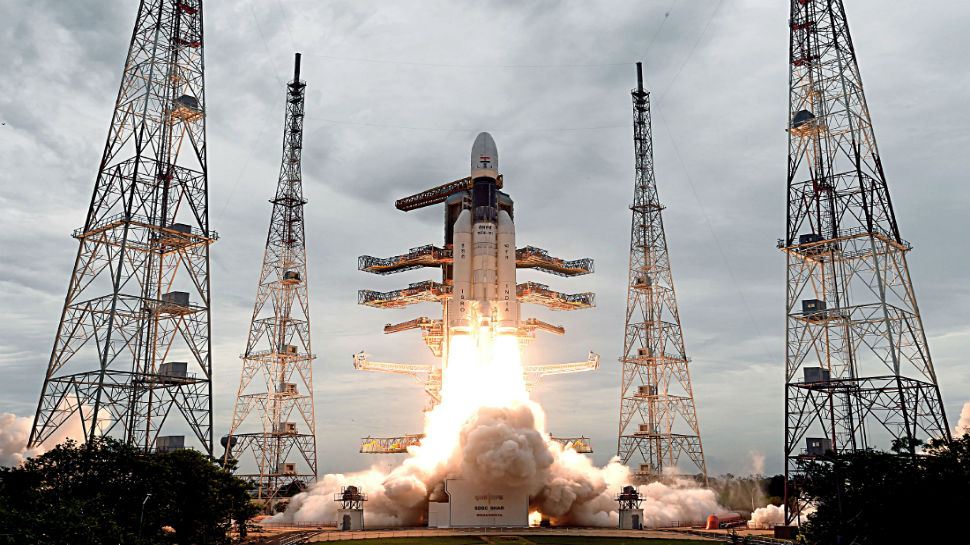 India’s second unmanned mission to the Moon lifted off on July 22 on the Indian Space Research Organisation’s gigantic GSLV Mark III rocket. With three modules – an orbiter, lander and rover –Chandrayaan 2 is India’s most complex and prestigious space project. What’s unique about Chandrayaan-2 is that ISRO will attempt to launch the rover in the lunar South Pole for the first time. Till date nobody has made an attempt to land a rover in the polar region; all lunar probes have operated near the Moon’s equator.

Mylswamy Annadurai, the scientist behind the successful Mars explorer (Mangalyaan) and Chandrayaan-1 missions, told the media that “our long-term mission will be to have a permanent research station on the moon”.

After decades of being the world’s most low-profile space agency, ISRO is preparing for a high-octane push into space. In December 2018 the Narendra Modi government greenlighted the Rs 10,000 crore Gaganyaan space mission which aims to send three astronauts to space for a minimum of seven days. According to ISRO, the mission is expected to launch in 2022. This will be ISRO’s first manned mission, making India only the fourth nation to send a human to space after Russia, the US and China.

Space exploration is important because nations that establish bases and colonies in space and near-Earth objects will gain a huge advantage. A quick glance at history shows that during the colonial era – roughly the 15th to 19th centuries – the European nations launched sea voyages to explore the planet. Pirates such as Francis Drake of England were backed by the rulers of their countries to find new land, gold and slaves for “god and country”.

The nations of Western Europe despatched — or rather expelled — their surplus and unwanted populations into the newly ‘discovered’ territories of North and South America, Africa and Oceania, eventually claiming entire continents in the name of their king, queen or Pope.

The parallels to colonialism are hardly far-fetched. The late Neil Armstrong, the first man on the moon, wrote on the need for Americans to return to earth’s only satellite: “Some question why Americans should return to the moon. After all, they say, ‘we have already been there’. I find that mystifying. It would be as if 16th century monarchs proclaimed that ‘we need not go to the New World, we have already been there’. Americans have visited and examined six locations on Luna, varying in size from a suburban lot to a small township. That leaves more than 14 million square miles yet to explore.”

Many Americans share Armstrong’s colonising zeal. As a US expert declared after the Curiosity rover landed on Mars: “The red planet is firmly in American hands.” In fact, after decades of drift at NASA, the US is now incubating tomorrow’s private space adventurers.

US companies such as SpaceX, founded by PayPal entrepreneur Elon Musk, Boeing, Sierra Nevada Corporation and PlanetSpace are all eyeing the big prize of space exploration. According to online magazine Quartz, “Lots of other private American companies enter each year to win prizes designed to spur innovation in manned space flight and moon landings.” Across the Atlantic, British entrepreneur Richard Branson’s Virgin Galactic is on the cusp of launching suborbital tourist flights after a few more test flights.

The rash of private players gives the West a huge advantage in space. According to the California Institute of Technology, “Private corporations have ambitious agendas for orbital payload delivery and astronaut transport, space tourism and even interplanetary travel. The share of space technologies developed and built in the private sphere continues to increase as both old and new companies ramp up their space efforts. Space agencies around the world, including in the US, are increasing their reliance on these services to reduce costs and avoid long development cycles.”

To be a space power is not only a source of national pride but also an indication of India’s increasingly prominent role on the global stage. However, there’s a more important reason why India must send humans into space – to mine fuel from the Moon. The Chandrayaan-2 rover will analyse samples of the lunar surface for helium-3, a potentially trillion-dollar isotope that is believed to be abundant on the Moon.

The idea of harvesting a clean and efficient form of energy from the Moon is not science fiction any more. Unlike Earth, which is protected by its magnetic field, the Moon has been bombarded with large quantities of helium-3 by solar winds. It is thought that this isotope could provide safer nuclear energy in a fusion reactor, since it is not radioactive and would not produce dangerous waste products.

Another draw is tapping water on the moon’s surface. Hydrogen and oxygen can then be separated to create rocket fuel for deep-space missions to Mars and beyond. Essentially, the moon can serve as a fuelling station for spacecraft.

The West has got a head start in this area. Moon Express, the first private company in history to receive government permission to travel beyond Earth’s orbit, has raised a total of $45 million in private equity financing to fund its lunar mission.

According to co-founder and chairman Naveen Jain, Moon Express now has all the capital it needs to land its small robotic spacecraft on the surface of the moon. The company’s goal is twofold: 1) mine the moon for valuable resources, such as helium-3, gold, platinum group metals, rare earth metals and water; and 2) help researchers develop human space colonies for future generations.

According to Bloomberg, China could have its own astronauts walking on the moon’s surface and working in a research station at its south pole sometime in the 2030s. On the way there, they may stop over at a space station scheduled for assembly starting next year.

The Chang’e 3 spacecraft has taken spectrographic and ground penetrating radar measurements. The Chinese space agency CNSA hopes the Chang’e 5, which will be launched in December 2019, will bring back the first samples containing the actual prize — fusion-ready helium-3.

The Indian news media tends to brag about ISRO reaching the Moon and Mars on shoestring budgets – as if that’s something to be proud about. For instance, the Mangalyaan mission to Mars cost less than the Hollywood movie Gravity and its low budget of $75 million was hyped as an achievement. In fact, launching spacecraft on a shoestring budget is a pointer to the lack of strategic thinking in the political leadership, which lavishes billions on wasteful populist schemes.

India spends just 0.38 per cent of its budget on space. ISRO’s $1.5 billion annual budget places it in the ninth spot in a list of national space agencies, and is dwarfed by NASA ($21 billion) and India’s primary adversary China in second place with a budget of $11 billion a year. ISROs budget has not increased proportionate to the increase in the number of missions. The number of scientists, engineers and support staff in ISRO has also remained unchanged at around 16,000 for years.

The limitation placed by a pathetically small budget has led India to concentrate in developmental areas such as weather, communication and remote sensing. Manned space exploration was barely on the radar until Modi cleared the funds.

Attack of the crabs

While the Chinese are working tirelessly to rocket ahead of the West, in India there are numerous internal saboteurs. The loudest critic of the Mars mission was none other than former ISRO head G. Madhavan Nair. “It would be a national waste,” he had told Science magazine, following the announcement of the mission in 2012. He described the project as “a half-baked, half-cooked mission being attempted in undue haste with misplaced objectives”.

There are other fringe elements, such as Jean Dreze, a development economist at the Delhi School of Economics, who want the country to scale down its space ambitions. “I don’t understand the importance of India sending a space mission to Mars when half of its children are undernourished and half of all Indian families have no access to sanitation,” Dreze told the Financial Times. According to him, space research is “part of the Indian elite’s delusional quest for superpower status”.

Practically frothing at the mouth, the late communist writer Praful Bidwai Bidwai wrote: “The Mars mission is overwhelmingly irrelevant to space science and won’t advance the frontiers of knowledge. It will divert attention from the real technological challenges facing the Indian space programme, and will further distort our science and technology priorities.” Do newspapers pay him to write such infantile, laboured prose?

Clearly, India’s Macaulayites — a class of people Indian in look but Westernised in their outlook — cannot be accused of having national pride. They are useful idiots of India’s enemies who want to keep the country down.

Nations that have access to space will dominate those left below on Earth. It’s as simple as that. In the decades ahead, as the earth’s finite resources begin to deplete, the mining of the moon and the asteroids will become necessary. Only nations having the ability to extract these resources will be able to explore and populate the final frontier. Large rotating space stations alone can generate the artificial gravity required for humans to avoid the debilitating effects of prolonged weightlessness. Significantly, space flight will change how we travel just as the Internet transformed the way we communicate.

What ISRO needs are clear goals — first a manned spaceflight, then the moon and plans to explore Mars after that. These goals are also necessary to attract the next generation of scientific pioneers. Spectacular space missions are not merely for pride; they inspire bright young minds to study science and technology; some of them will be tomorrow’s Aryabhattas and Ramanujans. Scientific breakthroughs lead to more children entering the science stream instead of Breaking India forces at leftist universities.

At the moment, India does not have a regulatory framework for the space sector, which is becoming necessary with the growth of the private space industry in the country. The Space Activities Bill 2017, which is yet to be passed by Parliament, calls for the establishment of a regulatory body in charge of authorisation and licensing, as well as liability issues. After the draft of the bill was put in the public domain in November 2017, the government received 52 responses, of which 15 were from the general public. The rest were from the Indian aerospace industry and start-ups, law firms or lawyers, space experts and scholars and satellite communication companies.

The draft doesn’t offer clarity on the critical question of who will be eligible to be the licensed operator of space activities and what barriers of entry such space aspirants will face. It is also silent on the question of timelines for granting of licenses and the licensing fee. However, the push for the establishment of a regulatory body suggests India is serious about ensuring flow of technology from the state sponsored space programme to the private sector.

Currently, there are two state driven enterprises Antrix and NewSpace India Ltd that are dedicated to taking the state space programme to the private sector. The setting up of these two agencies provides a framework for interpreting the vision and specific provisions of the Space Activities Bill.

It doesn’t take a rocket scientist to figure out that if India lags behind in the space race, then 21st century cities on the Moon and Mars are likely to be European/American or Chinese dominated. We cannot afford to miss the bus a second time.

John R Searle’s The Mystery of Consciousness: A Summary with some Indian Perspectives