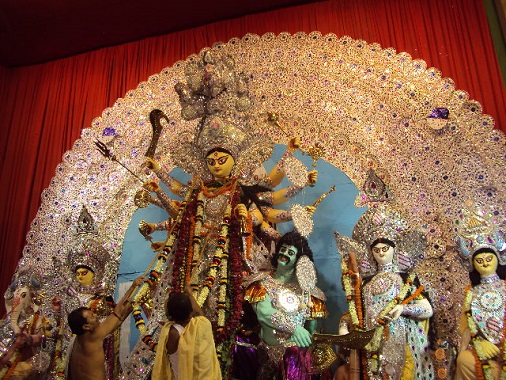 I came on a pilgrimage to Kashi forgetting that you are omnipresent.

In thinking about you I forgot that You are beyond thought.

In praying to You I forgot that You are beyond words.

The injunctions from Judaism, Christianity and Islam forbid “graven images” in which a key distinction is made between the concept of a “creator” who is transcendent, separate and distinct from “His” creation. All “worship” is reserved for the creator alone; it is a serious offense to worship anything other than the creator. This leads to iconoclasm, literally. The destruction of the Bamiyan Buddhas, for instance, was no random act of vandalism. It was duly authorized by the Supreme Court of the Islamic government of Afghanistan constituted by the Taliban.  “But-parasti” is a constant danger and the Islamic Court had ruled for the Bamiyan’s destruction fearing a return of the natives to paganism. All Abrahamic fundamentalists are in a constant fight against this ever-present danger of a return to paganism. Unfortunately, this fundamentalism creates idols that are worse than those it seeks to break.

This idea of having “no idols” exists in denial of human psychology and is stuck with the transcendent creator concept.  What does it mean to “worship” and what is an idol? The injunction that worship is to be reserved for the creator-concept obscures a simple understanding of worship.  Whatever you revere, respect, put “on a pedestal”, give your attention to—that is the object of your worship. The mind is constantly in the worship of one thing or another. Those are your idols.

Teenagers may put posters of rock stars in their rooms. The stars are often called teen idols. You may put up a poster of Sachin Tendulkar or Beckham, that’s who you revere, look up to, idolize. Those are your idols. Or you may put a lot of attention on your car, you get really upset if someone scratches it, that is your idol. You could put up a small representation of your car and make an altar for it but that is not necessary. You have already created an altar for your car in your garage.

The idol is that which is at the center of your mind’s attention. The most powerful idols are not physical.  The concepts the mind clings to are the most powerful idols. Think you are “secular”, “atheistic”? For you money may be most important, that is what you obsess over. You can make an image of Kubera, the god of wealth, and worship it, it is the same thing. Kubera is already in your mind and he is the object of your worship. Or it may be sex instead. Then you worship Kama deva, the god of sensory pleasure. It is just a way to name it.  Or your idol may be your job, or it may be your “cause”.  Or the secularism-concept may be your idol, you would get very upset if someone blasphemes against it. The red flag of revolution may be your idol. Every morning American public school children pay obeisance to the American Flag. That is their idol. This is why its burning or desecration causes such consternation. Neither your imagined “atheism” nor your injunctions against “false gods” frees you from these gods that are your idols.  “Thou shalt not make graven images” from your Holy Books does not work either.

In fact, your Holy Books are your biggest idols. The Sikhs will fan their book, is the book feeling too hot? In Pakistan, a woman was lynched for allegedly burning pages of the Koran for the sin of blasphemy.  Why this attachment to ink and pulp, is this not an idol?  When you make your Holy Book into the “Word of God” that you are willing to die for, and willing to kill for, know that it is the biggest idol.  “Book parasti”, getting stuck on a book, any book, is worse than “but parasti.” It is simply another concept for your mind. A fundamentalist is someone that has made their book their idol. If they really take it seriously, they get stuck on a concept. That idol can rule their mind and dissociate themselves from their own humanity and selves. Missionaries stuck on converting people because a book told them to “make disciples of all nations” create cultural violence on the dictates of their idol. While the faithful rail against the depiction of the Prophet, a hair of the Prophet, hazrat bal, gets housed in a big mosque.  Wahabbis and ISIS demolish such shrines in the constant battle against creeping paganism or shirk. But the concept of shirk is yet another idol of the mind.

[pullquote]All Abrahamic fundamentalists are in a constant fight against this ever-present danger of a return to paganism. Unfortunately, this fundamentalism creates idols that are worse than those it seeks to break.[/pullquote]

The railing against idol-worship by Abrahamic religions is futile. It just shifts their idols from certain forms to other ones like “Holy Books”. What you resist persists. The mind seeks to hold on to something. Deprived of some forms it goes towards others. The blasphemy of criticizing or, Allah forbid, burning a Holy Book comes back with twice the vehemence.  Destroying idols comes from fundamentalism and fans fundamentalism. Indic traditions, whether Buddhist, Jain or Hindu, all used iconic images. The construction of Sikhism as a “religion” in the Abrahmic mold, birthed by colonial scholarship, cast it in opposition to “idol-worshipping, caste-ridden” Hindus. This bred a certain fundamentalism. Even the Arya Samaj, which had a big influence on the RSS, created fundamentalist tendencies in its deprecation of murti-puja.

Till the mind is truly liberated, it will always have idols. We construct the world with layer upon layer of concepts. Enlightenment is freedom from these concepts, to see reality as it is. But very few people are at that stage where they can be truly free of concepts, their idols. Saying do not worship idols does not make it so. The mind clings to something, even if it is the concept of not having idols. That too is in idol. So what is the way out?

[pullquote] In fact, your Holy Books are your biggest idols. [/pullquote]

Indic traditions accepted the fact that the mind clings to idols.  The first step towards any freedom is accepting the reality of bondage.  Rejection of idols is an ignorant denial of the tendency of the mind. Acceptance is the first step towards freedom. And when you accept that the mind clings to idols you can then consciously choose what will be your idol. The idol inside your mind is often more harmful than the idol outside it. The outside form can serve to focus the mind. So the sages gave us certain forms to anchor the outward attention and to elevate it.

A murti, literally, is a divine form, from murat or form. What makes it divine? Certain forms are chosen for their effect on the mind, a visual composition, much like a musical composition can affect the mind through the listening. Forms that embody positive qualities like love, compassion, wisdom, knowledge, courage, and strength, help orient the mind to these qualities. But is a murti simply a beautiful sculpture like a musical composition? What makes it sacred? The qualities it invokes in the mind makes it sacred. And we make it sacred. We make it sacred with our attention, by sanctifying it. We install it in a proper manner, we chant mantras to imbue it with our power, the power of our attention, of our aastha. We have chosen to elevate it, to put that form on a pedestal.  And then we connect to it through the ritual of puja.

When we do puja we use the five elements in a conscious way. All five—space, air, fire, water, earth are present in the puja. This connects us with the manifest. Rather than getting the mind stuck in a concept, puja brings that attention to the present moment. We worship the divine with those elements and that allows us to be human and connected to the entire universe. A murti does not ask its followers to destroy the idols of others or wage war on non-believers, heathens and kafirs.  That requires text. Fundamentalism cannot exist without text. Fundamentalist movements from ISIS to Al Qaeda to the Southern Baptists all draw the literate and educated, literally interpreting their texts.

When we see the entire universe as part of one consciousness we start to be free of fundamentalism that divides the world into us and them into believers and non-believers, into profane and sacred. Sacred is what we have chosen to be sacred and when we choose wisely that which we have chosen brings us back to our self, to the self where we are all connected. So the act of going out with our attention to the elements brings us back as we worship a divine form. The mind is always choosing idols, whether a movie star, or money, clothes, cars. All this has an effect on our consciousness. Not all these idols elevate our consciousness. Whatever form we choose, we imbue the qualities of that form. Worship is attention. So when we are paying attention to divine forms we become elevated. The sages cognized these forms aware of what would help the mind. A concept can come in the way of that experience.

[pullquote]Indic traditions accepted the fact that the mind clings to idols.  The first step towards any freedom is accepting the reality of bondage.  Rejection of idols is an ignorant denial of the tendency of the mind. [/pullquote]

When the mind is truly free it would not need idols to hold on to. But who is at that stage? For sure, none of those that rail against idols. If one is not enlightened there will always be idols. If one is enlightened, there is nothing to rail against. Idols, whether external or internal, are equally part of the lila and one can simply observe and enjoy. Idol-breaking is an act of ignorance. Those who are incensed with idols and wish to be iconoclasts can start with the idols they have made from their Holy Books. It would help move the world away from fundamentalism of texts and of worship of the “One True God.”