Muslim goons on a rampage against Hindus in Ullal 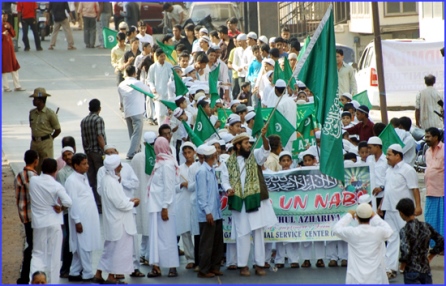 Samaja Vani from the South Canara region reports a shocking news emanating from Ullal near Mangalore.

Certain alarming developments in and around Ullal near Mangalore have largely gone unreported in the mainstream media. There is a dedicated group of Muslims who systematically and regularly unleash their perversion against Hindu girls.

Ullal being a coastal town, fishing is the main occupation of its population. So here’s what happens when Hindu fishermen leave home everyday to do their fishing and thereby earn their livelihood:

1. The said Muslim group violently knocks on the doors of the houses of these fishermen when they’re away, on the seas.

2. The said Muslim group pelts stones at the houses of these fishermen, breaking windowpanes.

3. The said Muslim group vandalizes the cars of these fishermen.

4. The said Muslim group inserts large, broken glass pieces in the gap between the closed door of these fishermen when they’re away.

5. The said Muslim group surrounds the houses of these fishermen and hollers on the lines of “hey, send your girls to us!”

6. The said Muslim group surrounds the houses of these fishermen and hollers “Pakistan Zindabad!”

7. Members of the said Muslim peer inside the window (which they’ve already broken) of such houses and yell, “hey! your husband is not home! shall I come in?”

The following is the image of the interior of a Hindu fisherman’s house vandalized by this group.

Picture of a Hindu fisherman’s house vandalized in Ullal

Here is also a list of specific incidents that have occurred over the past month:

1. At around 3 A.M on 4 February, a group of fanatical Muslims dropped a boulder on a boat worth about Rs. 2 Crores belonging to a Hindu fisherman, destroying it beyond repair.

2. Another group raided the house of a Hindu, molested the womenfolk therein, and smashed the bikes and car belonging to the family.

3. On 5 February, a bunch of Muslim goons made unprovoked vulgar gestures at middle aged Hindu mothers and challenged them to touch us if you have the guts!” The angered ladies chased them up to the Kodi masjid, leading to a tense situation. They were prevented by the police who stopped them from entering the Masjid.

Thanks to such incidents which have increased both in frequency and intensity, Hindu fishermen’s tolerance reached the breaking point. On 5 February, a sizable crowd of these fishermen took out a protest march which culminated in them surrounding the police station demanding the arrest of these Muslim hooligans.

The happenings in Ullal are just the latest instances of what threatens to become a widespread phenomenon in the South Canara region. Local Hindus are quick to point the linkages: increasing instances of Love Jihad, the forced sex episode at Deralakatte, and the Love Jihad incident in Udupi are three major such incidents in recent memory.

If this was not enough, a local leader of the rogue outfit Popular Front of India (PFI), Shafi Ballare took out a rally of a mob of Muslims and made a speech which included this gem:

We will rebuild the Babri mosque on 6 December…if Hindus try to build a Hindu rashtra, we will build an Islamic rashtra…true Islamic culture lies in Sunnat (circumcision), and it is because of Sunnat that Islam is growing in strength throughout the world…we produce 14 children, 22 children but Hindus can produce only 2 or 3.

And as usual, all mainstream media channels and newspapers have chosen radio silence over truthful reporting.