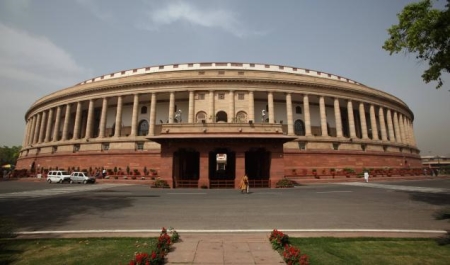 Over 25,000 Muslims from different parts of Uttar Pradesh decide to storm into New Delhi to stake a claim on a disputed piece of land—and cause chaos in the eastern and central parts of the city as also in the neighboring towns of Ghaziabad and Noida. As the administration in Delhi and UP handled the mob with kid gloves, the motley crowd of clerics, hooligans, arsonists, and rioters brought the national capital of a wannabe superpower to a standstill.

Lakhs of people suffered as arterial roads got choked; they were hours late in reaching their destinations. I took three-and-a-half hours to reach my home at Vaishali, Ghaziabad, from Parliament Street; normally, the commute takes one hour in the evening. I saw many ambulances stranded in jams; after some time, realizing that movement was not possible, at least one of them even switched off the siren. I just hope that there was no loss of life because of the madness that the unruly Muslims occasioned on roads.

The Muslims were participating in the protest organized by Anjumane Haidari, a committee that claims to own the Waqf land at Karbala in Jor Bagh in central Delhi. They wanted go to Akbar Road to demand the arrest of senior Congress leader Ahmed Patel who is party president Sonia Gandhi’s top aide. According to them, he is a business partner of the man, one Wasim Khan, who has acquired the land. On his part, Khan has alleged wrongdoing on the part of his opponents.

Whatever may be the truth, it is indubitable that it a land dispute among the Muslims. On March 10, there was not provocation from any side, yet the gathered Muslims, who are said to be Shias, decided to take the law into their own hands. They burnt vehicles. Most of the mainstream media shied away from reporting the event in its entirety; important details were missing.

One newspaper, Dainik Jagran, reported that when the miscreants burnt a bus, passengers were inside it; it was their good fortune that they managed to disembark just in time, without any casualties. Was it an attempt at another Godhra? Imagine such an incident with the arsonists being members of the Bajrang Dal! There would have been a deluge of condemnation, profanities, sanctimoniousness, and pontification from media Brahmins, political commentators, tenured academics, and professional revolutionaries, all directed at the Hindutva organizations, the Bharatiya Janata Party (BJP), and surely Narendra Modi. But, in this case, there was a conspiracy of silence.

Unfortunately, the BJP itself participated in this conspiracy. For the saffron party too does not like to antagonize the Muslims. Other parties, of course, vie with each other to placate the largest minority community by regularly genuflecting to the most regressive elements like the clergy. There are special schemes for the Muslims; non-BJP leaders also want to give reservation to Muslims in jobs and educational institutes. Then there is that vile document, the Sachar Committee Report.

The entire system appears to be tilted in favor of the Muslims. And what, pray, is their response? When the Indian cricket team recently lost to Pakistan, over three score Kashmiri Muslim students at a Meerut college cheered our arch-rivals. I am not suggesting that not being patriotic is a crime; nor is it my contention that all Muslims are Pak sympathizers. But such incidents do raise doubts about their loyalty to the nation among a large section of the populace. At any rate, it is disheartening that the leading luminaries of the community have not lambasted the pro-Pak students.

Community leaders should know that they have to abide by the Constitution, the law of the land, and the views of the Hindus. It needs to be emphasized here that one of the Fundamental Duties, as laid out in our Constitution, is “to promote harmony and the spirit of common brotherhood amongst all the people of India transcending religious, linguistic and regional or sectional diversities; to renounce practices derogatory to the dignity of women.” Clearly, the erring students did the opposite.

Further, though not in this instance, the Muslims are loath to abandon polygamy, which is undoubtedly among the “practices derogatory to the dignity of women.” In fact, they want to keep their personal laws in consonance with the medieval Shariat, as evidenced in the Shah Bano case almost three decades ago.

The long and the short of it is that the Muslims should not take the Hindus and the nation for granted. They cannot cheer the cricket team of a nation which allows the beheading of our soldiers—and expect sops from government and greater numbers in security forces. They cannot disregard our Constitution—and expect no repercussions from Hindu society. And they cannot hold a city, and that too the national Capital, to ransom—and expect the people to love them.