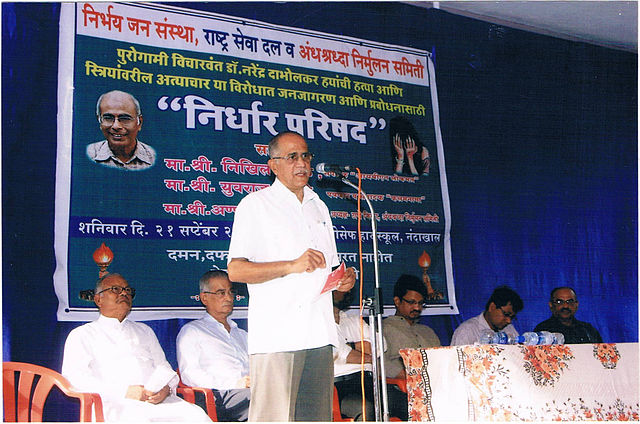 If we go by numerous narratives on Indian society that find place in our academia plus media, a prominent one is encouraging the spread of ‘rationalism’ and ‘progressive thinking’ in our so-called ‘superstitious’ society. It is to fulfill this ‘noble’ mission that the Maharashtra Andhashraddha Nirmoolan Samiti (ANS) was established in 1989 by famed writer Narendra Dabholkar. The Samiti states its primary aim is  to  remove ‘superstitions’ which included sorcery from the State. However the Samiti has so far mostly targeted issues that would adversely affect Hindu culture, customs and traditions.

Now in a free democratic country like India many organisations have the right to promote its values and work towards fulfilling its goals in a constituional manner. However, it becomes problematic when the said values and goals are also linked to suspicious activities. Certain facts that have been present for long in the public domain does paint a different picture of the rationalist organisation.

Primarily, this entity of rationalist crusaders has one fatal flaw: fishy financial linkages.Many concerned individuals had lodged several complaints with various Government Departments requesting for the inquiry into the alleged financial irregularities of the  scams of the ANS Trust. Several such complaints were pending in the office of the Charity Commissioner right from the year 2012. It is only after the recently appointed Chief Minister Devendra Fadanavis ordered for resolving the complaints, that the inquiry started in right earnest. In an inquiry report made by the Assistant Charity Commissioner of the  ‘Public Trust Registration, Satara’ certain instances of irregularities were noted (See Appendix-1), couple of which were very suspicious as listed below:

1. The income of the Trust seems to have abnormally risen from the year 2004 and a large amount has been invested by the Trust. But the Trust has not maintained the registers showing details of the investment. Also any changes in the investments have not been submitted to the office of the Charity Commissioner. This is violation of the provisions of clause 35 of Mumbai Public Trust Rule 1950.

2. From the accounts statements submitted by the Trust, it is found that it is registered under Foreign Contribution Regulation Act (FCRA) with the Ministry of Home Affairs of the Central Government. As such the Trust has received hefty amounts of funds from overseas. However, the receipts for such fund do not mention the registration number of FCRA. In addition, the funds collected seemed to have been spent on the objectives other than those of the Trust.

3. In the year 2006, Maharashtra Foundation India (USA) has awarded a sum of 10 lakh to Dr. Dabholkar. The amount has been shown as donated to the Trust. However, during inquiry and in the records, it does not appear in the 2006 Audit Report, Income and Expenditure account (Balance Sheet).

4. The Trust has collected huge amount of grants and donations from overseas, along with various kinds of funds from the Government and schools. The collected amount has not been spent for the purpose for which it is collected. It has been misused. There is doubt whether a timely audit has been conducted because the audit reports appear to have been submitted after much delay.

Such irregularities did not go unnoticed by the government and as a result the FCRA registration of the Samiti was deemed expired from 01/11/2016 (See Appendix-2). Another notable fact to mention here would be the fact that one of the notable trustees of ANS is the brother of  former Union Minister and Maharashtra heavyweight leader, Sharad Pawar, Pratap Pawar (See Appendix-3). These inconsistent and suspicious queries regarding the financial nature of the Samiti are in dire need of satisfactory responses.

But the problem with ANS is not just limited to financial irregularities. During the tumultuous timeline of 2007-2011, the country saw a spurt in Naxalite activities which along with dastardly attacks also included subtle propagation of Naxalite viewpoints that aims for the subversion of the Indian state and plans to engage in total war with the Indian Union. As per law enforcement authorities in Maharashtra, the Police Superintendents and Commissioners in the State were instructed to keep a close watch on the activities of this (ANS) organisation (See Appendix-4).

The Deputy Commissioner of CID department in Maharashtra around the month of August in the year 2011 had provided to all Police Superintendents and Commissioners in the State a list of 62 organisations out of which 55 organisations had some form of linkages with the Naxalites while the fact that the remaining seven organisations were directly Naxals. The CID asked the authorities to compile detailed information about those organisations. Among the listed organisations the name of Andhashraddha Nirmulan Samiti is the fiftieth entity in the CID’s list.

On 7 May of 2007, four  naxalites, who were wanted for serious crimes got nabbed by the law enforcement authorities from Deekshabhoomi in Nagpur. The city’s police stated that the naxalites had assembled  at Deekshabhoomi with an aim to carry out insurrectionary activities at Nagpur. Police recovered arms, including a revolver and a mobile from them.  Among those arrested was present Naresh Bansod, president of the Andhashraddha Nirmulan Samiti in Gondia.

In August of 2007,  Dr Dabholakar released a press note condemning the arrest of his colleague (Bansod). Initially Bansod was granted bail by the high court for lack of evidence.The police then went to the Supreme Court to appeal against the bail and got a stay. Bansod was finally acquitted and released in July of 2010. However keeping in mind the subtle and sinister manner in which Maoist propaganda is promoted the issue of the Samiti’s links should be further probed.

Unfortunately, on 20 August 2013 while out on a morning walk, Dabholkar was shot down by two unidentified gunmen. Since his murder was suspected to be related to his rationalist activities within four days of the heinous crime the pending controversial Anti-Superstition and Black Magic Ordinance was promulgated in the state of Maharashtra.

On 10 May 2014, the CBI took over the case but about a year later Dabholkar’s family members approached the Bombay high court accusing the CBI of not being serious about the investigation. In May 2016, the Court repeated this criticism of the  CBI’s ineffective investigation in the case.

Sadly the circumstances surrounding his gruesome murder cannot be separated from the seemingly nefarious issues plaguing the ANS. The primary accused in the murder case, ENT Specialist Dr. Virendra Tawade was arrested in Kolhapur based on the sole evidence of a local goldsmith named Sanjay Sadvilkar. The said goldsmith himself has been facing a CID inquiry (See Appendix-5) for other irregularities. Coupled with funding irregularities and suspicious naxal linkages, it is imperative that all these investigations be properly completed.