Narendra Modi: The Prime Minister who will transform India 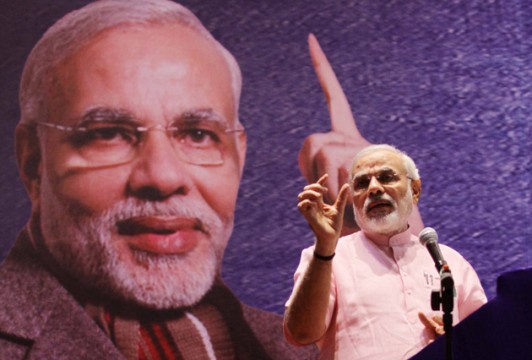 The Indian economy has been noteworthy for being unable to develop despite many favourable conditions and factors. India has a deep history and a rich culture. It is fairly well-endowed with natural resources, and has adequate physical and human capital. It can profit from the accumulated understanding of what works from the experiences of other countries that developed before. Finally, it has available for its use the kind of technology that other countries did not have at the time of their development.

And yet after 67 years of becoming politically independent, India has failed to achieve the status of even a middle-income nation. The explanation for this is most likely that India has not been economically free.

The linkage between economic freedom and economic prosperity is robust and enduring. That relationship has been analytically and empirically validated. The Fraser Institute’s “Economic Freedom of the World 2013 Annual Report” ranks India’s economic freedom at 111th out of 152 countries it surveyed. It notes: “Nations that are economically free out-perform non-free nations in indicators of well-being.”

India’s colonial legacy is a key to understanding why India lacks economic freedom. Under the British Raj, India was not economically free because economic freedom is not consistent with the basic purpose of colonization: exploitation and extraction. Those who took over power after the British left found the existing system quite suitable for their own purposes. British Raj 1.0 gave way to British Raj 2.0. The relationship between the government and the people continued to be one of ruler and subject.

That relationship is now set to change because the objective of the new administration is in sharp contrast with what went before. For almost all of its post-colonial history, India’s government has been either directly or indirectly controlled by the Nehru-Gandhi family. Jawaharlal Nehru was an ardent believer in Soviet-style socialism. India’s economy languished with GDP growth around 3 percent per year, the “Nehru rate of growth.”

Until now, India could not have followed a path of economic development through suitable non-socialist policies because it would have implied a repudiation and rejection of Nehruvian socialism which has been the holiest of cows in a land full of holy cows.

Modi of course is not related to the Nehru-Gandhi dynasty. Not just that, he is an outsider to New Delhi and unlike those who preceded him, Narendra Modi is not beholden to anybody. He has the freedom to make different policies and thus put India on a development path that India should have taken but did not take — the path of economic development.

The broad outlines of Modi’s economic policies are easy to see. Not only has he been outspoken about it but as the chief minister of Gujarat state, he has followed them for the last dozen years. These policies are consistent with his stated objective of making India economically prosperous.

India’s biggest challenge is to free a few hundred million people from poverty. The necessary (but not sufficient) condition for that is if the economy grows rapidly at the potential 10 percent GDP growth rate per year. This growth has to be accompanied by increased employment, which can only be achieved through an expansion of the manufacturing sector. Labor will to migrate from the agricultural sector to manufacturing, raising both average productivity and aggregate production.

India’s manufacturing sector will certainly grow under Modi’s leadership. He has been remarkably successful in attracting domestic and foreign investment to Gujarat. India can become the destination for low-cost manufacturing. One can safely predict that there is going to be a manufacturing boom in India.

“Minimum government, maximum governance” and “government must not be in the business of business” are two of his favorite phrases. Over the socialist years, the government and the public sector have gotten bigger and dysfunctional. The power of those in government has grown consequently, and the inevitable outcome has been — as Lord Acton warned — corruption.

India rates as one of the most corrupt places to do business. Because Modi does not tolerate corruption, the level of public corruption will decline and in a few years, India will join the ranks of the least corrupt nations.

Objectives matter because they alone determine the outcome. The objectives of a leader translate into performance of the organization through specific policies. Because Modi’s objective is economic growth and development and not personal enrichment, one can reasonably expect India’s economic fortunes to change.

It will be an India which is investment friendly. As he puts it, “no red tape, only red carpet.” The government will become leaner and more efficient. The public sector will shrink even as the private sector grows. Indian entrepreneurs have so far only been allowed to flourish outside India will find India a great place to do business.

Indians will have their economic freedom and with it their long-awaited economic prosperity. India’s phase transition has begun.

(This was first published in the author’s blog, Atanu Dey on India’s Development)