WHO DOES NARENDRA MODI REPRESENT WITH A ‘DISMAL’ 31% VOTE SHARE? 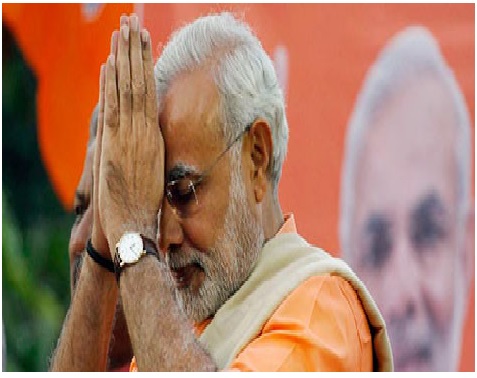 This was sent by IndiaFacts reader, Anoop Bhat.

There is a huge hue and cry among the sections who call themselves progressive thinkers or secularists or liberals. Whenever Mr. Modi says he has got a mandate from the people, they come out like worms looking to blurt out their absolutely rubbish analyses. They say Modi is not voted by most people in the country and hence has no right to take decisions for them. So, I decided to check past results and unmask the true face of these worthies.

Now, generally, India is filled with various kinds of vote banks and personal interests scoring over party interests, forget the country. It is not even in the picture. Until one man comes to the picture: Narendra Modi. Sorry but there was a Modi wave.

Malkajgiri Loksabha seat (Hyderabad suburbs) with 2953915 registered voters for the ’14 election is the largest in the country, while Lakshadweep has only 47,972 voters. Now, for all practical purposes, the Malkajgiri MP doesn’t get more powers than a Lakshadweep MP although he represents people 61.575 times more than the people represented by Lakshadweep MP.

Pritam Shinde, a LS MP from Beed, Maharashtra won by 6.96 lac votes whereas Thupstan Chhewang of Ladakh won the elections by a meager margin of 36 votes. Now on the floor of the house, both are equal.They are and they should be.

Generally a winning candidate from Lakshadweep gets far less votes than a person who lost his deposit and came seventh or eighth in Malkajgiri. How can you discuss voteshares in this country when there are so many parties, so many alliances, so many vastly different-sized constituencies? BJP did not even contest in close to 125 seats in this election. So does that mean a fifth or a fourth and a half, whatever that maybe doesn’t even go represented by the PM?

Ever since the results were declared on 16 May, these super analysts have no place to hide and Modi is slowly proving to be a leader par excellence. And so they are desperately trying to keep themselves relevant?

One such classic and oft-repeated line is this: since Modi’s BJP got only 31% of the votes polled, he should remember that it’s not an outright victory. They fail to forget that the NDA faced the election collectively and they together got 39% of the votes. A Lok Janshakti Party which had no seats in the outgoing parliament won 6 out of the 7 seats it contested, Shiv Sena won the highest number of seats ever, RLSP won 3 out of 3 and Apna Dal won 2 out of 2 and these analysts still believe the allies’ tallies can’t be attributed to the Modi wave?

There was one person who wrote, ‘Modi got only 31% of the votes polled by about 60 odd percent of the electorate, so effectively, he represents hardly 20% of the country!’ Who told him that the persons who didn’t turn up to vote were all against Modi? How is it that if 15 candidates in a constituency together get 25% of the votes, it is regarded as a vote against BJP? In a multiparty system with no cap on the number of contestants, the lesser candidates are going to collectively get 25 % or more of the votes. But in the scheme of things it means nothing.By the way, we should count ourselves fortunate that he didn’t write that there are millions of kids in India below the age of 18 who didn’t vote anyway, so Modi represents less than 10% of India!

Where was this gentleman’s math and statistical game play when Sanjay Dina Patil of the NCP won Mumbai North East in 2009 by a margin of 2933 votes when the total polled votes were less than the votes polled in the same constituency in 1996 elections? Don’t you think the population of the constituency increased between 1996 and 2009? So, what percentage of the Mumbai North East seat did Sanjay Patil represent? I’m not even going to ask the question what percentage of population the 10-year-long PM Manmohan Singh represented or what percentage of the country did Nehru represent as PM for the years 1947-52?

Let’s take some election data at random and analyse it.

It’s clear that 6,54,870 people voted in a constituency that had 15,72, 890 voters. Nobody questioned the Indian democracy or the First Past the Post system at that time.

It is clearly understandable by analyzing the various Lok Sabha and Vidhan Sabha elections over time that when there is a strong leader or a strong election issue, the smaller and the fringe parties get lesser votes and seats and they thrive only when the leadership of the leading parties is weak. Take the example of the 2004 elections. Many people still believe that the Congress won the election over BJP. But it’s not what it looks like.

Because a number of the ministers in the Vajpayee government lost their seats, including heavyweights like Yashwant Sinha and Murli Manohar Joshi, and the party secured 45 seats less than what it had in the outgoing parliament, it was certain that BJP was the loser. But the Congress was no winner either. Since Congress is a far more acceptable party than the BJP for most other political parties thanks to vote bank politics, it meant that UPA-1 was formed with the outside support of the Left parties who won over 60 seats, their highest tally ever. The Samajwadi Party won 39 out of the 80 seats in UP, also their best performance ever.

Perhaps, at the age of 80, Vajpayee and Advani didn’t appeal enough to the voters and polling percentages were abysmally low. The Lucknow seat from where PM Vajpayee was seeking reelection had polling percentage in the mid thirties. If that is the level of voter enthusiasm in the seat of a sitting PM, what more do we say?

Many seats in UP –Bihar had 40 percent and lesser polling. It was a mockery of the system. The worst ever results for the BJP allies in the swing states and ‘either here or there’ states of Tamil Nadu and Andhra Pradesh meant that the Congress managed to get a slender lead over BJP in the overall tally. In Kerala where the contest is purely bipolar between INC and the Left, the latter won 18 out of the 20 seats over the former and during government formation, promptly provided support to the UPA.

Nobody wailed about the ‘death of democracy’ at that time. Indeed, all is well as far as you keep a nationalist BJP out of power. Famines in large parts of the country for 2-3 years coupled with the erratic performance of the BJP MPs led to the shock defeat of the NDA. A vast majority of the educated, middle class Indians faceda disconnect with the system and lost sight of the importance of voting and that led to the fall of Vajpayee government. It took Modi and ten years to wake them up from their deep slumber.

Let me give the vote share of the winning parties in the elections held so far. None of the 16 elections had a case where the ruling party secured over 50% of the votes polled. In which case, do our expert commentators mean to say that none of the 16 parliaments had the people’s mandate? If the answer is no, then why is there so much cacophony over Modi’s victory? The closest someone got to the 50% mark was the Congress party in 1984, when it won a mind-numbing three fourths majority with over 410 seats. Even then, the Congress secured 49% of the vote. In 1952, Congress got 44.9% votes whereas the next largest party got a mere 3.29% of the votes.

In a multi-party system, you cannot go all out looking for a 50% winner. The same set of so called progressive people cry hoarse over 2 or 3 party systems saying they don’t allow freedom to form your own party or have a different viewpoint.

Now, when you have a multi party system, the same set of people cry that the winner doesn’t have enough votes. In countries like Sri Lanka, there is a rule that you have to get 50% votes to win your seat. This time, most BJP candidates have won by securing 50% of the votes. But this is different from winning 50% of the votes polled in the entire country. Do they realize that if a party gets say 55% of votes in a country as diverse as India, they may get 500 seats and there won’t be an opposition at all? Would that be good for the country? And in the same breath they feel it is bad the BJP govt hasn’t given LoP status to Congress.

So, is the First Past the Post system bad for our country? Should we change?

Look at the different parts of the Government. The President is elected by an electoral college with representational voting (as done in many EU countries). He has his own set of powers and duties. The Rajya Sabha is elected by the members of the different State Legislatures and this House ensures that the ruling party in the Lok Sabha doesn’t run the country in a dictatorial manner. Although it may seem as a deterrent at times, it is needed for the health of the democracy and to protect all kinds of ideologies or beliefs of parties.

Here are some statistics for those who think that Narendra Modi hasn’t got the mandate to rule the country or who think he doesn’t represent all Indians.

It is clear that Narendra Modi represents all of India, and led the BJP to its finest and greatest electoral victory ever.