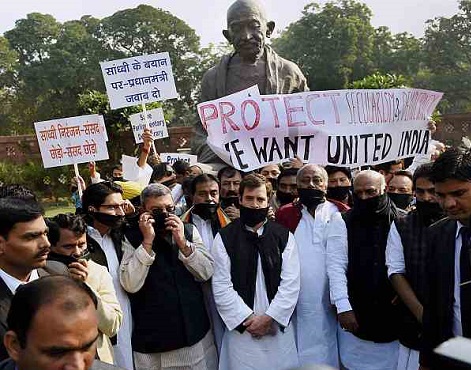 There is simply an absence of opposition in Indian parliament since most of the arguments against six month old government made by the non-NDA parties are merely continuation of their election rhetoric. They have reduced their job to “obstruct” rather than “oppose”. Now there is a fine line between ‘opposition’ and ‘obstruction’-

– Attempt to acquire the votes in order to change current policy/repeal a policy.

– Accept the current policy/government if one cannot acquire enough votes to change/repeal/defeat as described above.

– Use every single dirty trick in the book to achieve the above goal even if one cannot acquire enough votes to do so.

So we can say that the opposition parties’ job is to-

The fact of matter is that the opening up of defence sector to MNC’s was not the agenda of the earlier government. On top of it they opposed the current government’s idea of giving the MNC’s only 49% stake. Parties in opposition said that no one will come to India while reality is that the foreign defense manufacturers have already made a bee line to India.

Those ministers who lost elections like Kapil Sibal, Salman Khurshid, Manish Tiwari, P Chidambaram etc. have conveniently moved back to their secondary profession, instead of providing qualitative and quantitative arguable points/issues to their party colleagues who are in parliament. The other set of leaders seating in opposition benches are mostly tainted with corruption like Mayawati, Mulayam etc. or are leaders with no locus-standi with the common man’s issues like Sitaram Yechuri or Bardhan.

Created in 1889, the Inter-Parliamentary Union (IPU) which is the international organization of parliaments has defined the “Guidelines on the rights and duties of the opposition in parliament”. Following is an excerpt from the same-

“The opposition in parliament must show itself to be responsible and be able to act in a statesmanlike manner. It must engage in constructive and responsible opposition by making counter-proposals. In its action, the opposition must not seek to hinder pointlessly the action of the government but rather endeavour to encourage it to improve such action in the general interest.

The opposition in parliament has a duty to offer voters a credible alternative to the government in office to make the majority accountable. To be a credible alternative, however, the opposition must also be ready to exercise the responsibilities to which it aspires on a lasting basis. In other words, it must have a programme which it is ready to implement. In democracy, political life is enriched by free competition of political programmes; it is impoverished by rivalry based on personal ambitions which merely disqualifies it in the eyes of public opinion.”

Parties occupying the benches of opposition members in Indian parliament will be well advised to visit the role and duties of opposition and behave accordingly or run the risk of being labelled as the Oafish Opposition.