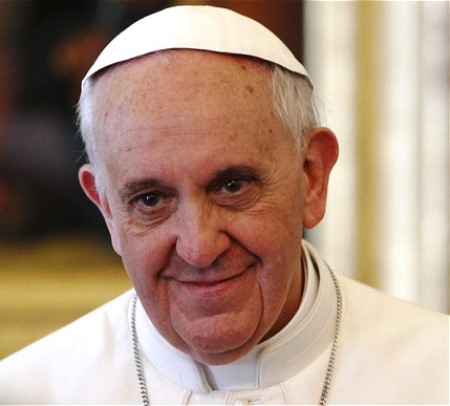 Great hope for a positive change in the Catholic Church is pinned on the Pontificate of your Holiness and recent statements indicate that this hope may not be misplaced. The future, your Holiness said in November 2013, is in the respectful coexistence of diversity and in the fundamental right to religious freedom in all its dimensions, and not in muting the different voices of religion.

This statement makes eminent sense and would need to be implemented by all who presently do not subscribe to a respectful coexistence of diversity in regard to religions. However, I sense (wrongly maybe) that it is a plea for other religions to respect Christianity, rather than a commitment by the Church to respect other religions. To be precise, since Christians are occasionally persecuted in Islamic countries, it seems to be an appeal to ‘live and let live’ between the two biggest religions on earth.

Your Holiness is aware that both, Christianity and Islam, claim to be the only true religion and their God, and Allah alone are true respectively. Both religions further hold that all people on earth have to accept this claim and join their particular religion to be saved and reach heaven or paradise. Both give a serious warning to those who don’t join: they will land up eternally in hell. These claims of exclusiveness are made without any evidence whatsoever, apart from the fact that the claims contradict each other, as both cannot be true. They require blind belief, and as blind, unreasonable belief is not natural for human beings, for many centuries it was enforced with state power and indoctrinated right from childhood with the fear of hell as the boogeyman.

May I ask Your Holiness to ponder how the respectful coexistence of diversity and the fundamental right to religious freedom is possible as long as these claims of exclusiveness are in place? Were these claims originally made to gain political power or were they made in the interest of the spiritual welfare of humanity? And may I also ask whether Your Holiness personally believes in these claims?

I trust that privately, Your Holiness does not believe in them, as media reported your statement that good atheists also will be redeemed. In other words, they won’t go automatically to hell. However, the Vatican took pains to clarify that Your Holiness did not mean it. Even my mother, 95 and a staunch Catholic all her life, expressed dismay that a perfectly sensible statement by the Pope was watered down.

Your Holiness may feel compelled for worldly reasons to stick to the claim of exclusiveness as dropping it would entail wrapping up all conversion attempts and in the process lose power, wealth and influence. Further there may be fear that other Christian denominations will not go along and will gain an advantage over the Catholic Church. Still another worry may be that Islam will not drop the claim of exclusiveness and will push aggressively for conversion.

However, the Catholic Church was the first institution to put up this baseless claim, which has brought unspeakable disaster upon humankind. From this claim the Church derived not only the ‘right’, but the ‘duty’ to storm across the globe and impose forcefully her ‘belief system’ – in Europe, in the Americas and in Africa and now in Asia. It was no doubt an ingenious ploy to claim that God wants everyone to become Christian. . Mark Twain famously said, “Religion was born when the first conman met the first fool”. I would change it, “Dogmatic religion was born when ….”.

Some centuries later, Islam followed suit, claiming that Allah wants everyone to accept Islam, and we all know the violent conflicts resulting from those unsubstantiated claims. Since the Catholic Church started this disastrous trend, it needs to reverse it. The welfare of humanity as a whole has to be the concern and not the welfare of a religious institution. Hopefully Your Holiness has the courage to make a real, clear change for the better and will not fall for hairsplitting theological arguments, like ‘redemption is possible but not salvation’, etc.

Most Christians especially in Europe don’t believe anymore in unreasonable claims. The sad thing is that together with the dogmas, many reject belief in God altogether. They had not learnt to listen to their conscience and to enquire into truth, as the Church has played the role of the conscience-and truth-keeper for too long. The consequences for our societies are there for everyone to see.

However, many Christians do start pondering and believe in a ‘great power’, but not in the Christian God. For example, when I asked some fifty Christians in Germany whether they believe that Hindus who heard about Jesus Christ, but do not convert, will go to hell, nobody said yes. Even a priest said no. And not a single German I met was in favour of missionary activity in India. Yet Pope John Paul II declared in India the intention of the Church to plant the cross in Asia in the new millennium and considered India as a field for a rich harvest, which goes completely against ‘respectful coexistence’.

I live in India since 33 years and can assert with full confidence that India has no need of Christian missionaries, and yet huge sums of money are being pumped in to lure converts with material benefits and to build churches. I am aware that Your Holiness is responsible only for Catholics and not for the myriad of other Christian denominations that prey on poor Hindus, but if the Catholic Church made a start of truly respecting Hindus, it would have a big impact.

Maybe Your Holiness is under the impression that Hinduism is a depraved religion and Hindus would do well to accept the Christian God instead of their multiple gods. Such an impression would be completely wrong. There is no other religion that is unjustly denigrated as badly as Hinduism. Sorry to say that Christian (including Catholic) missionaries are in the forefront of this vilification campaign. Few people in the west know how profound India’s ancient tradition is. A solid philosophical basis for our existence and helpful tenets for a fulfilling, meaningful life had been known in India long before ‘religions’, as we know them today, came into being. The only addition Christianity brought in anew, are unverifiable dogmas that cannot possibly have a bearing on the absolute Truth. Can an event in history impact the absolute Truth? Will Truth make a distinction between people who are baptized and those who are not? “There is no salvation outside the Church” is, and I may be excused for using strong language, ridiculous.

The Indian rishis had discovered ages ago that an all-pervading Presence is at the core of this universe, indescribable, but best described as absolute consciousness. Further, the Hindu law of karma preceded the Christian dictum “as you sow so you reap’. A Council stopped Christians from believing in rebirth which would explain many riddles that trouble them, for example why there is great injustice already at birth? The advantage of having a perfect person as a friend and guide on the spiritual path was known in India, but till some 2000 years ago nobody claimed that ‘only’ Krishna or ‘only’ Ram or ‘only’ Buddha can lead to salvation and that whoever does not believe it, goes to hell. “Truth is One, the wise call it by many names”, the Indian rishis declared and listed different names of gods. That was at a time, when Christianity was nowhere in sight. Surely they would have included ‘God’ as another name and Jesus as an avatar, not expecting to be backstabbed by followers of “God” declaring: “Truth is one and must be called only by one name and is fully revealed only in one book.”

The multiple gods in Hinduism are personified powers that help to access the formless, nameless Presence that is in all of us. Christians in India are told that Hindu gods are devils. At the same time, Christianity tries to revive (possibly inspired by Hinduism) belief in angels, as devotion for the Invisible is easier by focusing on images.

Hinduism is not a belief system. It is a knowledge system. It is a genuine inquiry into what is true about us and the world. Hindus are not required to believe anything that does not make sense and can never be verified. There is complete freedom. Yes, most believe in rebirth, which makes sense. Most believe in an all pervading Brahman (many other names are in use) that is also in humans. Most believe that this divine essence can be experienced in oneself, if the person purifies herself by certain disciplines coupled with devotion. This belief is verifiable. It is not blind. There were many Rishis who realized their oneness with Brahman. In Christianity, too, there were mystics who experienced oneness with the Divine like Meister Eckhart did. Sadly, he was excommunicated by the Church. Why is the Church resisting scientific insight that there is some mystery essence in everything? And why is it difficult to accept that in the long, long history of humanity, there were several, not only one, outstanding personalities who showed the way to the truth?

Holy Father, I request you in all sincerity to be such an outstanding personality who guides his followers on a path of expansion, and does not straitjacket them into an unbelievable belief system, which among others demands converting Hindus to Christianity. Your Holiness is venerated as the representative of the Highest Power in this universe by over a billion of Catholics. Many of your predecessors were not worthy of this veneration. Utmost truthfulness and integrity are required. Calculations about worldly power must not come in the way. The Catholic Church surely would benefit, not lose out, if it honors Truth and gives up its claim that there is no salvation outside the Church. Truth cannot be cheated; neither can it be contained in a book. Truth is what we basically are. Hindus, whose religion is universal and all-encompassing, respect diverse traditions. They are one of the most cultured, gentle and peace-loving people on earth who live and let live, unless greatly provoked.

Holy Father, if you are serious about respecting other religions, the claim of exclusiveness must be scrapped and Hindus who have given to the world a deep philosophy and a great culture, must be respected. Many of us look forward to hearing truly good news from the Catholic Church under your stewardship. The main issue that plagues the Church is not whether women should be priests or whether divorcees can take Holy Communion. The main issue is the unfounded claim of exclusiveness regarding ‘salvation’. It divides humanity into us who are right and saved, versus them who are wrong and damned. Kindly drop this harmful claim and make your Pontificate truly memorable and beneficial for all humanity.

Posted as registered letter to Pope Francis on 10th  December 2013 from Puducherry, India