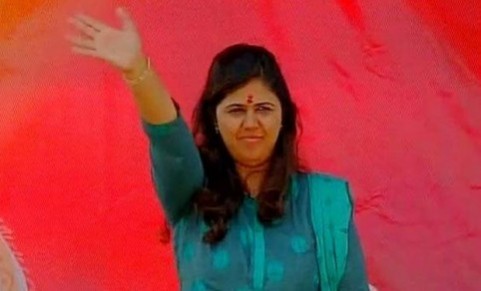 This is a translation of Ramesh Patange’s piece in Marathi that was published in Mumbai Tarun Bharat on 24 October.

The Maharashtra Assembly elections have just concluded. No doubt you played a vital role in the BJP victory. You created awareness in the society by launching the ‘Sangharsh Yatra’. You worked hard for creating a congenial atmosphere for the BJP. Congratulations for that.

The Sangharsha Yatra always reminds us of Mr. Gopinath Munde. I was one of the persons who drafted this Sangharsh Yatra. I always had respect for Mundeji and he treated me as a senior RSS worker as well. He never rejected any issue that I took to him.

Social identity and social justice were a common thread between both of us. He was the face not only of Hinduism but also of ordinary people. In other words, he was a real mass leader in the Maharashtra BJP. You have inherited the legacy. Mundeji worked hard and rose in the party ranks and in the minds of the people by the dint of his own merit. He never inherited any legacy.

His journey from an ordinary Jana Sangh worker to the Deputy Chief Minister of Maharashtra and then a central minister owed to his own capability, and he underwent many struggles to reach the position. Pankajatai, you have to continue this legacy. No doubt that Gopinath Munde was the only candidate for the CM post if he was alive. But India is a democracy, and the Constitution doesn’t allow transferring a political office by legacy.

The Marathi people initially warmed up to Raj Thackeray and gave him many opportunities to prove himself. However, after weighing him for some period, they rejected him in the Lok Sabha, and now even in Vidhan Sabha polls.

Y.S. Rajashekhara Reddy was a very popular CM in Andhra, but after his unfortunate death in the helicopter crash, his son Jagan Reddy mistakenly assumed that he would get to be the next CM. And history says that instead of becoming the CM, he had to go to jail. This is the harsh reality of politics.

While giving an interview to the Indian Express you stated that ‘you are the mass leader and the rest are metro leaders.’ Do you realize Pankaja Tai, how many adversaries you have created with this statement? Even all your well-wishers and advisers have remained silent ever since. I really don’t know if any advisers are there, but in politics you have some well-meaning and honest people who dare to give proper advice that may be bitter to listen to today, but would definitely prove to be true in the future.

The biography of Shivaji Maharaj is relevant in such a situation. It teaches us valuable lessons. Sant Ramadas had well said about politics that, ‘’इशारतीचे बोलो नये| बोलायाचे सांगू नये| सांगायचे लिहू नये…’ meaning one should not always speak or write one’s innermost thoughts. In other words, one should not show all their cards in politics. Open your ace of spades only when you are assured about victory. If you open them before that, you will lose the game for sure.

Pankajatai, there is nothing wrong in aspiring for the CM post. Every MLA can aspire for it because he or she is a mass leader in his own constituency. He may also prove his eligibility for the post. But the most important thing is whether your party feels the same. Others should recommend and propose the aspirant’s name.

Mr. Narendra Modi was not aspiring for the CM post in Gujarat, or for the PM post but others in the party hugely backed his name for the candidature. It always helps to remember that the party is supreme.

Public opinion is often shaky, fickle, and wavering. Therefore one should not rely only on public opinion at the expense of other factors, which are equally important. People are rallying behind you because of sympathy for your deceased father. That sympathy may wane with time. And so the best course is to try to build on your father’s legacy, and work in his path and create a name for yourself like he did. Let’s not forget that Rajiv Gandhi rode the sympathy wave to become the PM, and was demolished thanks to public wrath in recent history.

Pankajatai, parlous politicians and selfish coterie will always tell you a hundred things. Nowadays, even Mr. Udhhav Thackeray is showering praises on your father. But everybody knows what he felt regarding Gopinathrao Ji when he was alive. If the Shiv Sena wants to anoint you as CM, it is clear that it’s a mere political move. No politician should let himself/herself be used by others. He/she should always remain alert to such attempts and avoid it. As far as your age is concern, you have a very long political career ahead. You are only 34. You have a capacity to accomplish bigger things. Your political colleagues also admire you and have great expectations from you.

Pankajatai, please be patient. The one, who works steadily and patiently always wins. Politics is the field where patience always pays. Your name must naturally come forward from the people as a top Maharashtra BJP leader. BJP workers never tolerate haste. I have no idea about your relation with the RSS or your knowledge about the RSS-BJP relationship. But remember always that the BJP leadership respects the acquiescence of the RSS workers. Please be patient.