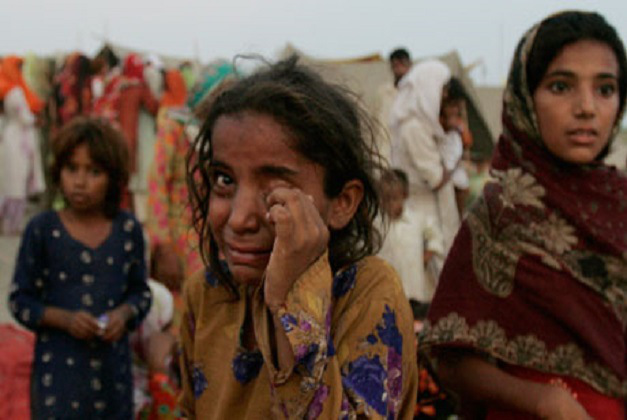 In the evening of 24 February 2012, Rinkle Kumari, a 16 year old student of Mirpur Mathelo, in a small village in the province of Sindh, was kidnapped to satisfy the lust of a Muslim scholar. The Muslim scholar had “political cover” provided by Mian Mittho, an elected National Assembly Member. Nand Lal, girl’s father and his family had to take refuge in a Gurdwara in Lahore after the complaint. On 25 February, as soon as Rinkle saw her family in the court, she screamed before the judge and pleaded to let her go to her mother.  The judge, however, had to inform her parents that if they insisted on taking Rinkle along, they would be responsible for the destruction that might follow – killing of 2,000 Hindus of district Ghotki.

The local judge ordered that the girl should be given to  Muslims, because her conversion is “the result of a spontaneous decision” and also stated that the marriage was above board. A claim that was repeated on February 27 at the hearing before the court, and the girl was “renamed” Faryal Shah. On March 26, Rinkle Kumari appeared before the judges of the Supreme Court in Islamabad. She said: in Pakistan, “there is no” justice, “kill me here but do not send me back” to the kidnappers. On 18 April 2012 Supreme Court of Pakistan handed Rinkle Kumari to her “husband” (kidnapper).

However, the story of Rinkle is not an isolated case: every month between 25 and 30 young girls, that is, about 300 girls a year are delivered into the hands of their torturers in Pakistan.

The Internet doesn’t say what happened to Rinkle after that fateful “judgment.” However, the Internet does have information about another 16-year old girl from Pakistan in great detail.

In the same year, another girl named Malala Yousafzai boarded her school bus in the district of Swat. A gunman fired three shots at her wounding her to the point of near death. She was subsequently sent to the Queen Elizabeth Hospital in Birmingham, England, for intensive treatment and recovery. On 12 October, a group of 50 Islamic clerics in Pakistan issued a fatwā against those who tried to kill her.

United Nations Special Envoy for Global Education Gordon Brown launched a UN petition, using the slogan “I am Malala”.  She was on the front cover of the 29 April 2013 issue of Time magazine, as one of “The 100 Most Influential People in the World“. She was the winner of Pakistan’s first National Youth Peace Prize, and Sakharov Prize, 2013. On 16 October 2013, the Government of Canada announced that the Parliament of Canada would confer Honorary Canadian citizenship upon her.

In February 2014, she was nominated for the World Children’s prize in Sweden. In April 2014 it was announced that Malala would be granted an honorary degree by the University of King’s College in Halifax.  Malala then spoke before the United Nations in July 2013, and met with Queen Elizabeth II in Buckingham Palace and in September 2013, she officially opened the Library of Birmingham. In the same month, she spoke at Harvard University, and in October she met with U.S. President Barack Obama . In July 2014, Malala spoke at the Girl Summit in London, advocating for rights for girls. Canadian Prime Minister Stephen Harper was the first to sign a petition requesting that Malala receive the Nobel Peace Prize.

In November 2012, the consulting firm Edelman began work for Malala on a pro bono basis, which according to the firm “involves providing a press office function for Malala.” The office employs five people, and is headed by speechwriter Jamie Lundie. McKinsey also continues to provide assistance to Malala.

On 12 July 2013, Malala 16th birthday, she spoke at the UN to call for worldwide access to education. The UN dubbed the event “Malala Day”. Yousafzai received several standing ovations. Ban Ki-moon, who also spoke at the session, described her as “our hero”. Malala also presented the chamber with “The Education We Want”, a Youth Resolution of education demands written by Youth for Youth, in a process co-ordinated by the UN Global Education First Youth Advocacy Group, telling her audience:

“Malala day is not my day. Today is the day of every woman, every boy and every girl who have raised their voice for their rights.”

It is perfectly understandable if Malala just didn’t have the time to speak for fellow girl Rinkle Kumari. I am not sure if Rinkle’s religion could have been a reason for it. I am also sure that none of the countries which gave away awards to Malala were aware about Rinkle Kumari or were they aware of her religion?

This starkly differential treatment given to a Hindu girl and a Muslim girl in Pakistan is not surprising. What surprises is the fact that it happens in Hindu-majority India as well.

Sania Mirza with a career high ranking of 27 in singles and 5 in doubles in Lawn Tennis was born in Maharashtra and settled in Hyderabad, and eventually married to a Pakistani cricketer was appointed the brand ambassador of Telangana. Mirza was named one of the ’50 heroes of Asia’ by Time in October 2005. In March 2010, The Economic Times named Mirza in the list of the “33 women who made India proud”.

Incidentally just for the records, Hyderabad has another sportsperson with similar sounding name i.e.  Saina Nehwal. She was born in Haryana and settled in Hyderabad. She is not married and has a career best ranking of 2 in the world in badminton.

Tara Shahdeo is a sports person and a gold medallist at the national level. Tara had married one Ranjit Kumar Kohli in July this year and discovered within days that his real identity went by the name of Raqibul Hasan Khan. She wrote in her complaint that she was tortured for over a month to accept Hasan’s religion. Following her complaint, Police seized 36 SIM cards, 15 mobile phones, two CPUs, and four printers from Hasan’s house. Police sources said he was even using mobile phones allotted in the name of judicial officials of Bihar. Mustaq Ahmad, a registrar with the Jharkhand High Court, was suspended on Thursday for abetting Hasan. Some politicians tried to blame Tara Shahdeo for the circumstances she was in.

The point is basically this: the state of the Hindu girl remains the same whether in India or Pakistan. While Mayawati, Akhilesh Yadav, Manish Tiwari et al are calling the real phenomenon of Love Jihad a BJP propaganda, Syed Wazid Ali, has given some startling facts in the article titled ‘Love Jihad: A Myth or a Mission’, (Uday India). He says  a survey conducted by the Crime Record Bureau of  Kerala Police and Kochi’s  University of  Advanced Law Studies revealed that the number of  girls missing from Kerala was 2127 in 2006 and 2560 in 2008. The police are said to have no information with respect to nearly 600 girls out of a total of 4,687 girls trapped in two successive years by love-jihadis.

It is incredible to think that the Home Minister of India is still not aware of Love Jihad. ” It is only some small Hindu groups, that are  taking up the issues related to Hindu girls. However, nobody knows how long they will be able to do so. Surprisingly the world media is worried that Janay Rice is becoming the symbol of women who stay in abusive relationships and call it a case of Stockholm Syndrome. (Rice’s husband Ray, punched her and dragged her out of an elevator. She has been punched by him earlier as well.) But the same media either finds nothing wrong or fails to speak up in the case of Rinkle Kumari or Tara Shahdeo or other such Hindu girls. In such a scenario, Hindu girls will have to take matters in their own hands. If they don’t, then their fate will be similar to that of the hapless Yezidi girls.

A 17 year old girl from the Yezidis, the religious minority captured by the Islamic State in Iraq, has described the horror of being kept as a sex slave by the extremist group.

“To hurt us even more, they told us to describe in detail to our parents what they are doing. Our torturers do not even spare the women who have small children with them. Nor do they spare the girls – some of our group are not even 13 years old. She said they were abused up to three times a day by different groups of men. They treat us as if we are their slaves. The men hit us and threaten us when we try to resist. Often I wish that they would beat me so severely that I would die. They keep telling us that we are unbelievers because we are non-Muslims and that we are their property, like war booty. They say we are like goats bought at a market.”

Rinkle Kumari’s story is really no different than that of the Yezidi girl. British female jihadists force captured Iraqi women into sexual slavery at brothels run by militants of the Islamic State of Iraq and Syria. However, the plight of Hindu girls in India is worse: they have their own fellow Hindu women robbing their dignity in the media, in the academia and elsewhere wearing the grab of secularism by denying the existence of Love Jihad.

Meanwhile, in Bangladesh, Eti Rani Acharjee, daughter of Moni Acharjee and Shova Rani Acharjee who is a minor girl of only 14 years was abducted on 23 August 2014 and was forcibly converted to Islam. The FIR names the perpetrators as Md. Siddiqur Rahman (20), Rup Chand Begum (40), Md. Abdur Rahim (48) and Ms. Sohenar Begum (42).

Note: An IndiaFacts editor erroneously mentioned Sania Mirza as a Pakistani citizen in the previous version of this piece. The error has been corrected and is regretted.