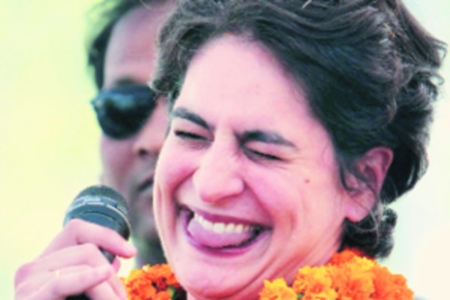 When you are Royalty, ordinary rules don’t apply to you. You make the laws that are meant for other people to follow. In India, that applies almost exclusively to the Nehru-Gandhi dynasty. The staunchest and the most slavish courtier might land in trouble for flouting laws but the Gandhis? A Congress-mooted scheme becomes successful? Credit Sonia and Rahul. A gargantuan scam like the 2G or Coalgate? Hold the Prime Minister and/or the minister in charge by the scruff. A. Raja gets to go to jail while Remote Control Rani knows nothing about it.

This has been the state of affairs for most of the 67 years of post Independence history of India. Not used to being challenged in any serious manner for so long certainly speaks volumes of the kind of genius that has gone into creating an ecosystem populated by the servile. And so when that serious challenge arrives, it is clearly obvious that the dynasty doesn’t know, is completely ill-prepared to offer even a token resistance.

The one major theme underlying the 2014 Lok Sabha polls is the fact that the Congress party has been rendered thoroughly speechless and defenceless by the BJP’s Prime Ministerial candidate, Narendra Modi. The Congress knows there’s no way it can defend its 10-year long record of plunder and pusillanimity. And so it has repeatedly, desperately fallen back on the only trick it knows: appealing to its Royalty, that sapless straw that looks like it’ll finally snap this time.

Consider this: Sonia Gandhi’s campaign trail this time around is almost invisible. Her “Hindustaniyat” appeal on paid-for TV time should perhaps count as the clearest proof of her trepidation at the inevitable drubbing her party will get come May 16. This is also true of Rahul Gandhi’s innumerable gaffes even on the campaign trail, and the thin attendance at his rallies. This then is the fate of the topmost members of the Dynasty–this fate despite a fawning media that played a huge role in building Rahul Gandhi’s profile as the next saviour of India.

Enter Priyanka Gandhi nee Vadra, the last hope. Needless, the media has played its part in building her image as well. Here is a sample of how Rediff journalist Sheela Bhatt described her during the 2012 Uttar Pradesh campaign trail:

She is sheer magic when seen through the eyes of a television camera in news footage… Her slim figure, her flawless European skin tone, her thick black hair and her resemblance to her grandmother Indira Gandhi is accentuated by the camera and loved by the television viewing urban middle-class. Every time she is shown on television screens, the myth around her deepens. No doubt, through the camera lens, she emerges as the beautiful mix of grace, wisdom and spontaneity. Her charm is evident when she responds to television journalists’ nagging questions.

It is curious how Priyanka Gandhi steps out of her home only during election time, and tours only the family fiefdoms of Rae Bareily and Amethi, two of the most backward regions of India. What mainstream media failed to report during the 2012 Uttar Pradesh elections was how Priyanka was snubbed by an old woman who asked her: “Oh! You’ve come now daughter? Will you come back again only after five years?”

In reality, it is not an election trail for her but a once-in-five-years poverty tourism. But this time around, this poverty tourism is turning out to be quite a nightmare what with BJP’s Smriti Irani taking the battle right to Priyanka’s brother’s doorstep. It also didn’t help matters that Narendra Modi’s frontal attack against the Dynasty resulted in a hugely successful rally. But that was her own doing. In the practiced haughtiness that comes naturally to Dynasty members, here is what she said:

Returning after paying their respects at the Mir Shah Baba’s dargah in Jais, Priyanka laughed and responded with a “who?” to a question about whether she thought BJP’s Smriti Irani would dent the Congress’s chances.

This was like giving ammunition to the enemy. Which is what Narendra Modi used with aplomb in his speech. To which Priyanka returned with how Amethi won’t forgive Modi for insulting her father, Rajiv Gandhi, the “martyr.” And that brings us back to that weak straw. It appears that nothing shakes the self-righteous sense of entitlement of the Dynasty. Priyanka could have countered Modi on numerous other issues but she chose only to invoke Rajiv Gandhi, the “martyr.”

So what exactly is the nature of Rajiv Gandhi’s martyrdom? Some major examples would suffice:

1. The genocide of Sikhs in Delhi that was unleashed almost as soon as he became Prime Minister, a mass-murder that he shamelessly justified.

2. The arrest of S. Gurumurthy for writing articles critical of Rajiv Gandhi’s Government.

3. The attempt at passing the infamous Defamation Bill which sought to muzzle free expression, chiefly of the media.

4. The attempt at passing the equally infamous Postal Bill which sought to intercept and censor all mail.

5. Banning Salman Rushdie’s Satanic Verses, earning India the dubious distinction of being the first country in the world to ban it.

6. The Bofors scandal that eventually led to his downfall.

7. The ill-advised military adventure in Sri Lanka which needlessly killed hundreds of Indian soldiers and brought disrepute to India.

8. The Shah Bano case in which he molested the Constitution to please Muslims.

This then is the exact nature of Rajiv Gandhi’s martyrdom that his daughter is now selling to the people of Amethi. Which only makes apparent her desperation.

Amethi appears to be fast slipping away from the Family’s hands. People in Amethi like people everywhere else in India have realized that the Family has conned them for 60 long years–this is apart from a new generation of voters who don’t care about things like dynastic loyalty.

What is even more telling is Rahul Gandhi’s own campaign. Amethi is his constituency, not his sister’s. And he doesn’t seem to be visible anywhere in the town. Indeed, the fact that he has brought her in to do an extended proxy campaigning shows that people there have already made up their mind to reject him. Of course, Narendra Modi has campaigned for Smriti Irani but just once; more importantly, Smriti has been doing the groundwork since the day her candidature was announced.

Whether Rahul will eventually win Amethi is beside the point. The fact that a greenhorn like Smriti Irani is giving him a serious run for his money is what counts. This is reminiscent of the pitched battle between Sushma Swaraj and Sonia Gandhi in Bellary during the 1990s. Sushma Swaraj lost that round. But ever since, Bellary became a BJP bastion. That is the key lesson for Rahul Gandhi, which he will never learn.

Sure, when you are Royalty, ordinary rules don’t apply to you. But then the rules are about to change.

Rajiv and Narendra: A Tale of Two Mandates