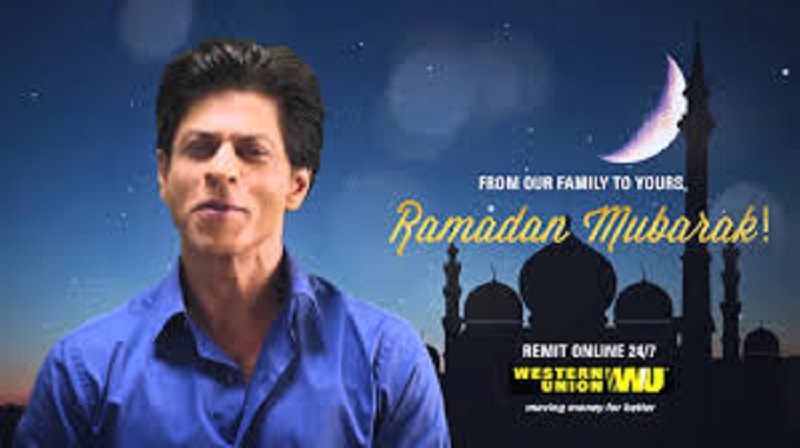 Interestingly, most companies in Pakistan—both local and MNCs—run Happy Ramzan advertisements and not Happy Ramadan. The following is a Pepsi commercial from Pakistan:

It is clear that “Ramadan” instead of “Ramazan” is being promoted in India by Western Union intentionally. Let’s now look at the significance of the usage of the word “Ramadan” and “Ramzan” using some reports by a few Indian authors in different media.

Why are Indian Muslims using the Arabic word ‘Ramadan’ instead of the traditional ‘Ramzan’?, wrote Shoaib Daniyal  in scroll.in on 19 Jun 2015. He noted:

“People have suddenly begun to call it ‘Ramadan’, .. .“ But as a child, growing up in Lucknow, it was always called ‘Ramzan’. This is a completely new thing.”…..“Twisting the pronunciation of Ramzan does not serve any explicit theological purpose, but it does serve as a rather prominent cultural marker, signaling a significant change in the way Indian Muslims – specifically Urdu-speaking Muslims – look at their culture.”

He is not alone. Rezaul H Laskar wrote in the Hindustan Times on 25 Jun 2015, “An Indian question: Why Ramzan is becoming Ramadan?” He pointed out that

“It’s difficult to say when the change from Ramzan to Ramadan and Khuda Hafiz to Allah Hafiz began creeping into India but the shift has been more pronounced in the past decade. I still get shocked when I hear some of my relatives using these terms but they sound alien to me……”

And as recently as 1 July 2015, Zehra Kazmi expressed  anguish by writing “Why I Choose to Call it ‘Ramzan’ and not ‘Ramadaan’.” He observes:

“If we turn the pages of history, we can see how language has led to wars. It remains one of the most potent tools of influence in the world that shapes our society in myriad ways…..Most Indians of the subcontinent have started preferring the Arabic Ramadaan over the usual Urdu/Farsi Ramzan. Mubarak has become Mabrouk or Kareem. A huge criticism of this debate has been that it is unnecessary, but I think that is a very shallow view of the entire issue. The words we choose to describe ourselves or our situation are of utmost importance. They reflect in which context we choose to place ourselves…every time Urdu speaking Muslims decide to exchange Urdu words for Arabic, we buy into the Salafi/Wahabi discourse.”

The articles in Scroll and Youth Ki Awaz clearly mention the historical fact that Indian Islam got its learnings from Iran. If one reads the aforementioned pieces along with the following report from the Indian Express, dated 24 June 2015, the picture becomes clear. Newly released documents in Arabic indicate how Iran’s engagement with India and its Shia community was worrying Saudi Arabia.

The report, sourced from Wikileaks says that the Secretariat General of the Muslim World League (Mecca), a controversial organisation with terror funding links, had requested Saudi Arabia to establish the organization’s Salafi/Wahhabi centres in India. Further,

What has emerged from Wikileaks is just a reconfirmation of what was already known and happening. An article titled “How Saudi funded Rs 1,700 crore for Wahabi influence in India” by Vicky Nanjappa on 25 June 2015 details the same.  Some excerpts from Vicky’s piece:

“Last year violence broke out near a Mosque in Bommanhalli, Bengaluru and what was being termed as minor tiff was in fact a case of some youth trying to impose the Wahabi preachings. ….. In another incident that occurred in Maharashtra, Wahabi scholars bribed some members of the Mosque and attempted taking over the administration…As a first step, Saudi sent in several Wahabi preachers into India an Intelligence Bureau report states. The years 2011 to 2013 alone saw a record number of 25,000 Wahabis coming to India and conducting seminars in various parts of the country. With them they brought in Rs 1700 crore in several installments and used it to propogate the Wahabi style of Islam.

Many in Kerala have welcomed with open arms the Wahabi style of preaching and this has let the Saudi controlled lot take control over nearly 75 Mosques in the state. … one got to see posters mourning the death of Osama Bin Laden and also a prayer for Ajmal Kasab after he was hanged. ..

Out of the total Rs 1700 crore that has been earmarked for the cause, Rs 800 crore is being spent on setting up Wahabi Universities …. One such university was seen in Andhra Pradesh …propose to set up 4 such universities which will only cater to Wahabi preachings. … earmarked Rs 400 crore to set up 40 Mosques adhering only to Wahabi preachings …. A sum of Rs 300 has been been earmarked to set up Madrasas while the remaining Rs 200 crore has been set aside as miscellaneous costs which also would include bribes to paid off to Mosque authorities as was seen in Maharashtra.

Now it is crystal clear that the change from “Ramzan” to “Ramdan” is part of religious warfare using shifts in religious terminology. All the three authors cited in this piece have blamed some of it on the preaching of televangelists.

In India, the Wahabi mission has moved from covert to overt mode a few years back.

Some news portals have taken up responsibility to make Ramdan part of journalistic vocabulary.

Firstpost is the leader among such media outlets. Here is a partial list of some of the mainstream media’s stories on Ramdan since 2013.

The involvement of the Indian media in such activity is nothing new. But starting with this year’s Ramazan, the mainstream media and corporate India’s promotion of Ramadan has taken a significant turn. Indeed, the Wahabis have embraced the corporate route.

Western Union is now trying to change the vocabulary of the advertising community as well as Indian masses across the country by making expensive investments in producing hi-tech advertisements promoting Ramadan.

Equally, one should not be surprised with Western Union’s role. Western Union has been accused earlier of indulging terror outfits. Glenn R. Simpson of The Wall Street Journal reported the following on 20 October 2004:

“..Western Union in 2003 set up operations with a state-controlled Syrian bank, in effect going into business with a government that the U.S. considers a state sponsor of terrorism. Western Union broke off the relationship two months ago after the Treasury Department blacklisted its partner for alleged involvement in terrorism and money laundering. ….

In Jordan and the Palestinian territories, one of Western Union’s top agents is the Amman-based Arab Bank, which managed funds for the Palestine Liberation Organization while the group engaged in acts of terror in the 1980s. The bank is currently the subject of a lawsuit brought by American victims of Palestinian terrorism in the U.S. District Court for the Eastern District of New York alleging that it also funds terrorism by the Palestinian groups Hamas and Islamic Jihad.

The Israeli government has made similar allegations about Cairo-Amman Bank, also of Amman, which offers Western Union services at 21 branches in the Palestinian territories. Hundreds of pages of financial documents, which Israel seized and placed on the Internet, paint a vivid picture of how Palestinian groups allegedly use the two banks. Both banks deny wrongdoing.”

Given this background, the Wahabis have picked up the correct company.

Over the years, Western Union has penetrated the nook and corner of India. And they have managed to do this by using the infrastructure of the Government of India.

As recently as June 2015, Western Union renewed its 14-year-old partnership with India Post, and is now in the race to become a payments bank. Western Union has a network of 1.11 lakh agents in the country, of which 9,942 are post offices.

Only time will tell us how many more corporates will take up the route of “Ramzan’ to “Ramdan” and if ever the Indian Government will wake up before it’s too late.