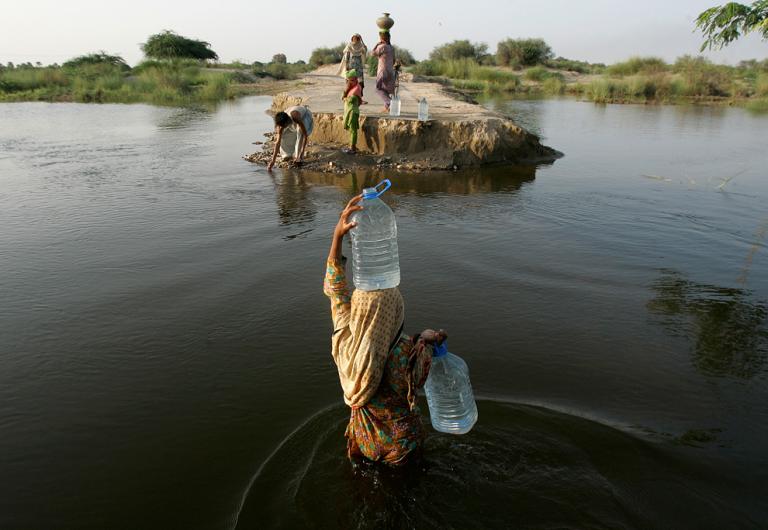 “Water Talks? Indo-Pak Water Talks? What, pray. are they?” That may well have been the response of the common man whose reading is, for several reasons, confined to the mainstream media which, alas, is obsessed with saturated with reporting debates over the judicially ordered hanging of a much-wanted terrorist and a much-married woman suspected of killing her daughter. But trust the PTI to be on the ball for hard news where the national interest is concerned. Its report, filed from Lahore datelined August 27 was published prominently in a pink newspaper of Mumbai. And its intro told us that “The three-day talks between India and Pakistan here over designs of KishanGanga Dam and four other hydroelectric power projects at the Jhelum and the Chenab rivers respectively has ended inconclusively, but the two sides hoped to find a solution in next meeting in Delhi.” The report also went to quote the leader of the Pakistani delegation as saying “We are optimistic that India will redress our concerns and the matter will be resolved without going to the International Court of Justice. In case our concerns are not met we will have no other option but to move to the ICJ.”

The “Water Talks” report in “The Dawn” newspaper of Pakistan was from Islamabad and it quoted the Federal Minister for Water and Power Khawaja Asif as saying “We will contest our case at an appropriate forum if India encroaches upon our water rights.”  He also said that India should honour the Indus Water Treaty (IWT).

What is there in that treaty which compels India to bow to Pakistan for the permission to build dams for its power from hydroelectric projects?

Unless you are at least 75 years old, you are unlikely to know much about the IWT. Why? Because it was signed between India and Pakistan exactly 55 years ago today — 19th September 1960.

As to why the Treaty was necessary and what it contained, in brief, let’s go over to Professor K.Warikoo, a Ph.D. in Central Asian Studies (School of International Studies, Jawaharlal Nehru University, and an eminent scholar from Jammu & Kashmir State. In a 6,845-word Paper (with 64 References) he wrote in June 2006, he made the following salient points relevant to the subject of this particular article. Nehru’s assertion in the Lok Sabha on 30 November 1960 that “we purchased a settlement, if you like; we purchased peace to that extent and it is good for both countries”, was not borne out by the subsequent events. Members of Parliament belonging to both the Congress, PSP and Jana Sangh pointed to the glaring mistakes committed in conclusion of this Treaty. Congress MPs from Punjab and Rajasthan, Iqbal Singh and H.C. Mathur called the treaty disadvantageous to India stating that both their home states “had been badly let down”.  Ashok Guha, another Congress MP lamented that “interests of India had been sacrificed to placate Pakistan“. Ashok Mehta, leader of the PSP in the Lok Sabha described it as a “peculiar treaty under which Pakistan, already a surplus area, would be unable to make full use of her share of the Indus Water and would have to allow it to flow into the sea.

On the contrary, India after the fullest development of the water resources, would still be short of supplies”.38 But Nehru’s efforts of creating goodwill and understanding with Pakistan by giving concessions through the Indus Treaty, did not bear fruit. That Nehru himself had realised this soon after, is confirmed by N.D. Gulhati, who led the Indian delegation during the negotiations over Indus. Gulhati recalls: “When I called on the Prime Minister on 28th February 1961, my last day in office, in a sad tone he said, ‘Gulhati, I had hoped that this agreement would open the way to settlement on other problems, but we are where we were“.
Clearly,  Jawaharlal Nehru had committed a blunder—his sixth on J&K, as we shall see.

Convincing proof that Nehru signing the Indus Water Treaty (IWT) with Pakistan 55 years ago was a blunder came last year from the horse’s mouth. Ironically, it came from the grandson of his very dear friend Sheikh Abdullah, the Sher-e-Kashmir, for whom Nehru did so many favours such as making him a member of the Constituent Assembly of India, allowing him to form a separate Constitution for the State of Jammu & Kashmir (J&K).

Yes, it was Omar Abdullah, Chief Minister of that State, who blasted the IWT on August 23, 2014.

According to a PTI report of that date from Srinagar, Omar Abdullah, said the “losses caused to the state on account of Indus Water Treaty are enormous.” He said “due to this Treaty, J&K cannot utilize its water resources to its will for generating hydro power, irrigating agriculture fields and providing drinking water to the people.” He mentioned the hurdle caused by the IWT in launch of the huge water supply project for Greater Jammu to utilize Chenab water to meet the requirements of the people for next 25 years.

Thus, while Nehru believed that the IWT was “a good thing for the country” it has actually become a blinder. What he signed sign 55 years ago was a Treaty of a suicidal trap from which Indians are unable to escape.

Of the various features of the IWT enumerated in Part I of this article, the most damaging to free India, was that the eastern rivers given to India carried just 20 to 25 percent of the total flow of the Indus Basin as against the 75 to 80 percent in the three western rivers allocated to Pakistan. Further, the bulk of the irrigation canals earlier developed on the Indus system were gifted to Pakistan. And out of 26 million acres of the pre-Independence Indian land irrigated annually by the Indus canals, 21 million acres lay in Pakistan and only 5 million acres in India.

Secondly, it was a crime to have denied free India the use of the western rivers for consumptive and agricultural use as well as for generating hydro-electric power without consent of Pakistan to ensure that flow of rivers and channels did not affect Pakistan.

It is this mandate of the IWT which has allowed Pakistan to scuttle hydel-eletric projects in J&K by creating a controversy over their design, height and spillways of a proposed Indian dam. That is why India had to abandon the construction work on Tulbul Navigation Project in 1987 and also led to obstruction of the construction of anti-siltation sluices at the Salal Hydel Project. Similarly, Pakistan created such a noise over the Baglihar Dam on the Chenab river that the Rs.4000-crore project with an installed capacity of 450 MW, which the J&K government began constructing in 2000, could be started only in October 2010, three years later than scheduled. And now it is Kishan Ganga Dam and four other hydro-electric power projects at the Jhelum and the Chenab rivers that have become the subject of “Water Talks” although they are “run-of-the-river” projects permissible under the IWT.

Thirdly, the IWT entailed India being made to pay a near fortune (62,060,000 Pounds Sterling) for the water infrastructure of …a confirmed enemy country! This remains the most ludicrous and anti-national deed ever committed by any Prime Minister of any country. It becomes unbelievably stupid considering that of the estimated $1000 million (partly in local currency) required for the replacement and development works of the Indus system, $697 million out of the $747 million of grants and loans from the USA and its friendly countries, $691 millions were to be spent in Pakistan and only $ 56 million in India. As against this “Other Backward Class” treatment of India, consider that Pakistan got all her development underwritten by the Bank’s financial plan besides the World Bank’s Press release remaining mum on the additional U.S. grant of 235 million dollars in local currency.

No nation, no Prime Minister, could be as naïve as that.

As a matter of fact, Nehru’s signing of the Indus Water Treaty on September 19, 1960 was his sixth blunder on J&K. The earlier five were as follows:

“I should like to make it clear that [the] question of aiding Kashmir in this emergency is not designed in any way to influence the State to accede to India. Our view, which we have repeatedly made public is that [the] question of accession in any disputed territory or State must be decided in accordance with the wishes of the people and we adhere to this view”. This assurance of abiding by the “wishes of the people” was well-nigh anti-national, when no such provision was even mentioned in the IOA.

“We have declared that the fate of Kashmir is ultimately to be decided by the people. That pledge we have given, and the Maharaja has supported it, not only to the people of Kashmir but to the world. We will not, and cannot back out of it. We are prepared when peace and law and order have been established to have a referendum held under international auspices like the United Nations. We want it to be a fair and just reference to the people, and we shall accept their verdict. I can imagine no fairer and juster offer.”

It was the totally unwarranted Plebiscite promise yet again — the one that the Hurriyat leaders repeatedly press on India day after day.

After the above five blunders comes Omar Abdullah’s strong repulsion over the Indus Water Treaty’s effect on J&K. It was Nehru’s 6th blunder that hounds and haunts us even 55 years after it was created with his signature.

These six are apart from Nehru’s Himalayan blunders on China, socialistic and leftist creations, his almost total neglect of rural development including education, his cover anti-Hindu attitude when he, against the will of the nation’s President, got the Hindu Code Bills passed but not a Uniform Civil Code etc.

Just what is this Nehru “legacy” which the Congress talking about? And just why does Sonia Rajiv Gandhi call Nehru as the “Congress’s tallest leader”?