Remembering the Vatican’s Role in the Holocaust 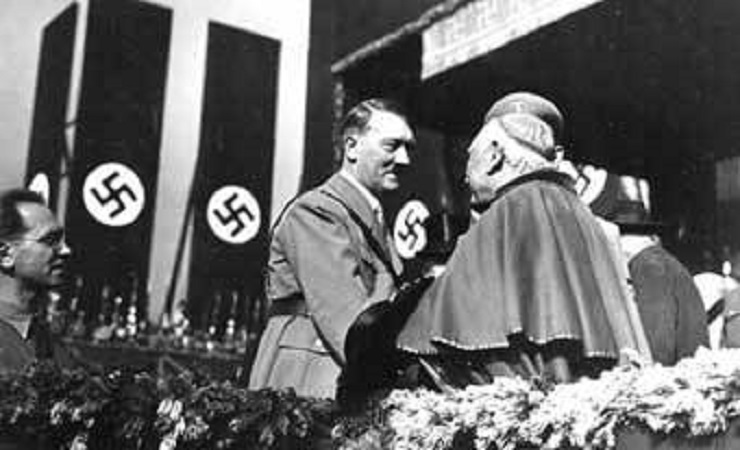 Recent reports claim that the Pope has called on every Catholic be they laymen or clergymen in Europe to shelter refugees fleeing from war-torn countries in Africa and the Middle East. This statement from the Holy See is in regard to the inflow of refugees escaping war-torn nation Syria where the feared militant Islamist group ISIS is slowly but steadily taking over. Many individuals in India as well as abroad are praising the Pope for this humane declaration.  Certainly, this plea to shelter the ill-fated victims of war-torn countries is commendable but I do not remember His Holiness making a similar bold claim when the hounds of ISIS were feasting on the helpless members of the Yezidi community.

To his limited credit, he did meet a delegate of Yezidi leaders and spoke of spiritual closeness the Vatican shares with the Yezidi leaders but there’s no record of the Pope publicly asking Europe to take in Yezidi refugees.Many journalists and scholars have mentioned the limited attention global leaders gave to the plight of the Yezidis. This is eerily similar to the insufficient reaction from European powers to the atrocities committed on the Armenians and Greeks by the Ottoman radicals (often termed as the Young Turks) during the WWI. Equally, who can forget the prolonged silence of the same Europeans to the Nazi maltreatment of Jews?

The global media so far has showered the present Pope with fulsome praises for what can best be described as his indefinite views on secularism, abortion, homosexuality, climate change, science and every other issue under the sun. But like with his predecessors, it is uncertain whether the Pope stands with historical evidence regarding the role played by the Catholic Church in many of the worst atrocities in world history. This is an important point since the media often links the Pope’s assertions with the Vatican’s overall policies.

One such brutal atrocity was the Holocaust that took place in the Third Reich of Nazi Germany led by the barbaric despot Adolf Hitler. The relationship between the Third Reich and the Vatican is nothing new for students of history but based on the praises showered currently on the Vatican, it is important we reminiscience this disreputable chapter in the history of the Vatican.

The history of anti-Semitism in the Christian creed is an oft-repeated barbaric and tragic story for a faith which began as a sect within Judaism. Since establishing itself in the receding days of the Roman Empire, the Church authorities in Europe branded the Jewish people as the murderers of Jesus Christ, and Jews were falsely indicted with farcical charges like draining the blood of Christian children.

Based on similar false but damning charges, during the course of the Medieval Era in Europe, thousands of Jews were executed, or simply murdered by mobs. Often the chief originator and prosecutor of these charges was the Vatican itself but protestants were not far behind.

The famed founder of the Protestant school of Christianity, Martin Luther, in his book titled On the Jews and Their Lies contended that Judaism should be outlawed and synagogues should be burned down. As for the Jews themselves, they should be enslaved.

The root of all of this anti-Semitic hatred and bloodshed are found in the passages of the Bible. The Vatican as well as other Christian authorities swear to uphold and propagate the true teachings of Christianity as chronicled in the Bible. And it is in this Bible that we find truly appalling verses advocating anti-semitism of the worst kind. The most notable among those verses are reproduced below:

Such verses were used by the rulers of Christianised Europe to inflict the worst kind of brutalities on their Jewish subjects. The climax of these brutalities was the ‘Final Solution’ of the Third Reich in which over six million Jews were murdered.

Vatican and the Mein Kampf

Reputed historians and scholars trace Hitler’s illogical and insidious hatred for the Jewish people to his book Mein Kampf, a reason for many modern European countries to ban or limit the sales of the book.

But this was not the case in the earlier part of the twentieth century when Hitler was a rising star in German politics.  As this report says, the Vatican censors of the said timeline, after long consideration, decided not to ban Mein Kampf. Of course, this lenience does not change the fact that between 1542 and 1966 the same censors had put thousands of books and authors on the Index of forbidden books which housed the works of Galileo, Luther, Immanuel Kant, and many other scholars and scientists; but nothing by Hitler. Even though the Church officially rejected racism which includes anti-semitism, Hitler’s book was not deemed racist enough to be forbidden.

The reason for this may be found in the reality behind the Vatican’s rejection of anti-semitism, which can be best described as opportunistic and a tad phony: the Vatican did not denounce the Jews on racial grounds but it did oppose them on religious and cultural ones.

In practice, the Vatican believed that the Jewish problem could be solved if the Jews readily convert en masse to Catholicism. The Church was in agreement with many of the then anti-Semitic propagandas popularly enshrined in the spurious pamphlet ‘The Protocols of Elders of Zion’ which blamed the Jews for the Bolshevik revolution in Russia as well as the global economic depression.

The profound discrepancy the Vatican had with these other anti-Semitic bigots was that it blamed Judaism instead of the Jewish race. Those who take comfort in this subtle distinction should be reminded of similar statements made by Islamist militants after they attack and kill their victims. It is common knowledge now that Christianity’s foundational anti-Judaism enabled many of the anti-Semitic moves made by the Third Reich. As Susan Zuccotti, an American historian, specializing in the Holocaust stated:

Churchmen looking for a scapegoat for modern challenges found it easier to blame outsiders, in this case Jews, than to target countrymen of their own religion. Conditioned by their Church’s traditional anti-Judaism for religious reasons, they thought of Jews almost instinctively when searching for an economic, social, and political enemy as well.

The support of the Vatican for anti-Semitism specifically becomes more obvious in the treaty it signed with Nazi Germany on 20 July 1933 called the Reichskonkordat .

On the 4th of January 1933 there was a secret meeting at the home of the Cologne banker and Nazi member, Kurt Baron von Schröder. There Hitler met with Franz Baron von Papen, who was at that time both German Chancellor and Papal Chamberlain. The postwar testimony of Schröder at the Nuremberg trials implies that this secret session, with only the trusted intermediary present, was set up to let Von Papen promise Hitler the support of Pope Pius XI and demand in return the destruction of the communist and social democratic parties and the conclusion of a concordat…..

The effect of this secret meeting can be seen in this speech Hitler gave on 23 March 1933, asking for the adoption of the Enabling Act, where he declared that the Nazis were fighting for Christianity:

While the Government is determined to carry through the political and moral purging of our public life, it is creating and insuring prerequisites for a truly religious life. The Government sees in both Christian confessions the most important factors for the maintenance of our folkdom. It will respect agreements concluded between them and the States. However, it expects that its work will meet with a similar appreciation. The Government will treat all other denominations with equal objective justice. It can never condone, though, that belonging to a certain denomination or to a certain race might be regarded as a license to commit or tolerate crimes. The Government will devote its care to the sincere living together of Church and State.

Thus when Hitler seized power through the Enabling Act of 24 March 1933, and suspended democratic rule “until further notice“, Zentrum, the Catholic Centre party sided with him. Zentrum leader Monsignor Ludwig Kaas, who was known to be an advisor to Eugenio Pacelli, (or Pope Pius XII), was one of the leaders who endorsed the Enabling act. It is to honour this support the Fuhrer ratified the Reichskonkordat before the year ended.

Three notable clauses of the Reichskonkordat are reproduced below:

Article 16– Before bishops take possession of their dioceses they are to take an oath of loyalty either to the Reich governor of the state (Land) concerned or to the President of the Reich respectively, according to the following formula: Before God and on the Holy Gospels I swear and promise, as becomes a bishop, loyalty to the German Reich and to the State (Land) of . . . I swear and promise to honour the legally constituted government and to cause the clergy of my diocese to honour it. With dutiful concern for the welfare and the interests of the German state, in the performance of the ecclesiastical office entrusted to me, I will endeavour to prevent everything injurious which might threaten it.

Article 32-Due to the special situation existing in Germany, and in view of the safeguards created by the clauses of this concordat of legislation preserving the rights and privileges of the Catholic Church in the Reich and its states (Länder), the Holy See will enact regulations to exclude the clergy and members of religious orders from membership in political parties and from working on their behalf.

Thus the Vatican with its opportunistic anti-Judaism saw it fit to ally with the anti-Semitic, mass-murdering Third Reich.