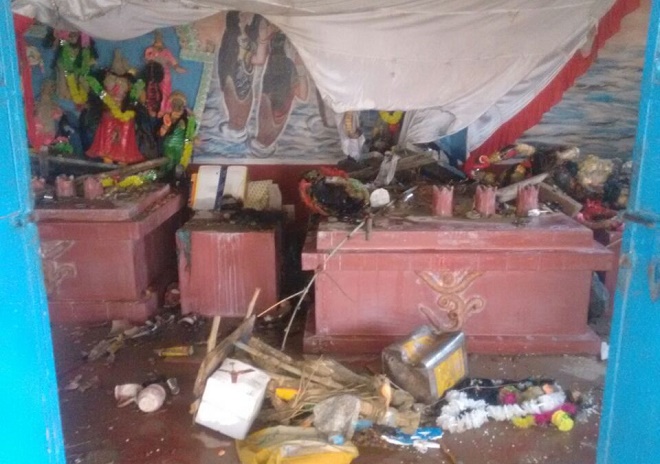 The report has been prepared using eye-witness accounts by social worker and technologist Bhaswar Goswami, who hails from Kaligram village and is currently working in Bengaluru.

Durga Puja is a time for celebration, Aradhana of ‘Naari Sakti’ and a way to worship mata for the emancipation of the individuals and the upliftment of the society in Bengal. It is a time when every household buys new cloths, gifts them to family and friends and celebrate the occasion with full merriment everywhere in rural and urban Bengal. But, the same is not true for the villagers of Kaligram, which is about 75 kilometers from the town of Malda in Bengal (location on the map).

This culturally rich and educated village has not known a peaceful Durga puja for at least three decades. Every year, Durga puja is accompanied by the horrors of Muslim oppression and aggression committed in the name of Muharrum celebration. This is especially true when both the festivals fall on the same day or close to each other. Each time, the Muslim procession used to cross this Hindu village, it wreaked havoc in the otherwise peaceful village. In 2015, the village saw gruesome Muslim violence [Read here]. This year the same has repeated again.

Even before the Puja started, as the villagers of Kaligram prepared with joy and devotion for the celebration, there was a fear among the Hindu households about the possibility of Muslim disruption and the flare up of communal tension, since Muharrum coincided with Durga Puja. Local administration had issued multiple discriminatory orders like ‘Hindus cannot play music while Muharrum is underway’, ‘immersion of Durga Idols cannot be done as per practice on certain days’, etc. These orders, though discriminatory were silently accepted by the Hindu villagers in order to maintain communal harmony. Yet, despite this compromise by the local Hindu community, Muslim mob attacked the village on the evening of October 14 and inflicted huge damage to Hindu lives and property.

Now, that the Section 144 has been imposed by the administration and the central armed forces are patrolling the village, there is a temporary relief to the Hindu villagers. In the last five days, a bustling village has turned into a riot hit desert, with hundreds becoming homeless, including children and many infants, who are now living in other’s homes and consuming community food. No relief or compensation has been provided by the administration till now.

Villagers are running pillars to post in order to file FIRs and looking for ways to bring the issue to the attention of the entire nation, while there are attempts in the local media to suppress the incident in the name of maintaining communal harmony and the administration has chosen to remain a mute spectator.

Here are three video clips showing the damage to Hindu property in the attacks.