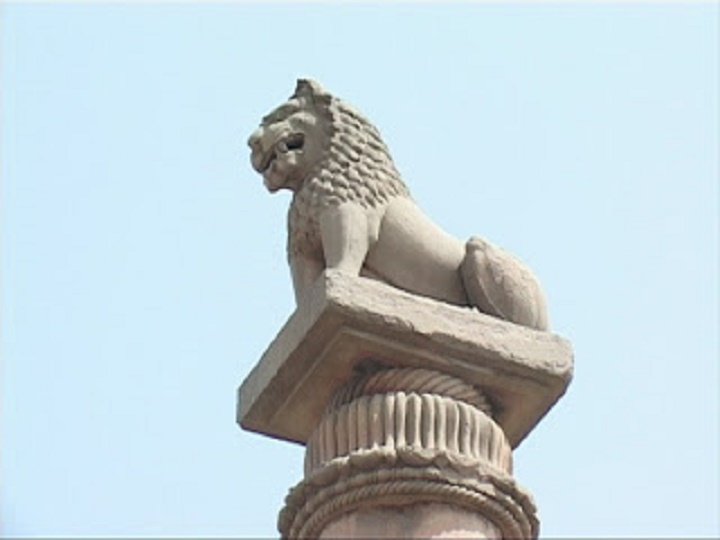 Our story begins in the city of Champa (Champaran), where a Brahmin named Pilindavatsa (also called Janasana) had a very beautiful daughter, named Subhadrangi (also called Dharma or Janapadakalyani). Astrologers foretold that she would marry a king and have two famous sons, one of whom would rule over a whole continent while the other would become a wandering monk. When his daughter was of age, he adorned her with all the ornaments he had and offered her in marriage to the Mauryan Emperor Bindusara, who accepted her into his harem as a concubine.

Her beauty made the queens of Bindusara jealous, as they feared that if Bindusara ever made love to her, she would become his favourite, and the Emperor would no longer pay attention to them, endangering their status (and the chances of their sons to succeed Bindusara). So, they trained her as a hairdresser and tried to keep her away from the Emperor.

However, eventually, she was sent to tend to Bindusara’s hair. Pleased with her services, Bindusara one day asked her what she would like most of all. She replied that she desired their union. Bindusara replied that this was not possible, as he was a kshatriya, and thus could not have marital or carnal relations with a barber.

She replied that she was the daughter of a Brahmin. Bindusara asked her who had made her a hairdresser, and she told him that the ladies of his harem had done so.

Bindusara told her not to do the work of a barber anymore, and married her.

There is a legend about Ashoka and Chandragupta Maurya’s sword, recounted in this extract from Charles Allen’s book on Ashoka. (Chandragupta converted to Jainism in his later years, abdicated his throne and became a Jain monk)-

One popular story has the boy Ashoka winning the affection of his grandfather the king though his intelligence and fighting skills, but then Chandragupta becomes a Jain and throws his sword away, which Ashoka finds and keeps, despite Chandragupta’s admonitions. However, it is doubtful that Ashoka could have been known to his grandfather as anything other than a toddler.

Bindusara wished to know which of his sons was best suited to succeed him. Hence the summoned the Ajivika sanyasi Pingalavatsajiva and requested him to test the princes.

Pingalavatsajiva told him to assemble the princes at the Garden of the Golden Pavilion, where he would examine them in the Emperor’s presence.

Accordingly, Bindusara summoned his sons. Ashoka was reluctant to go at first, because he was unpleasant to look at and had rough skin, and thus was despised by his father. Ashoka apparently had some kind of skin condition, and this is attested in multiple sources. He is also depicted as short and paunchy, with a disfigured face, in various sculptures. After his coronation, he took on the ironic title Priyadarshi, meaning ‘one who is dear to look at’. Perhaps it amused him to make people call him by this patently false name.

Radhagupta, the prime minister (the grandson of Chanakya), who was leaving the capital, offered Ashoka, the old royal elephant on which he was mounted. Reaching the pavilion, he took his seat on the ground, while the others were seated on appropriately raised seats. Ashoka’s mother had sent him boiled rice mixed with curds in an earthen vessel to eat.

Pingalavatsajiva examined the princes and came to the conclusion that Ashoka would rule after Bindusara. He knew that Bindusara detested Ashoka and hence he said he would make his prediction without disclosing any name. He declared that he who had arrived on the best mount, was seated on the best seat, and had the best vessel, food and drink would become Emperor. Each of the princes came to the conclusion that they were the ones being referred to.

When Ashoka returned, and his mother asked him what had transpired, Ashoka replied, “The prediction mentioned no name. It said that he who had the most excellent mount, seat, drink, vessel, and food will become king. The royal elephant’s back was my mount; the earth itself was my seat; my vessel was made of earth; boiled rice with curds my food and water my drink. Therefore I know that I shall be Emperor.”

Subhadrangi noticed that Pingalavatsajiva had begun to honor her particularly, after making his prediction. She questioned him and confirmed that he had predicted that Ashoka would be Emperor. So she advised him to leave the Empire till Ashoka ascended the throne, as Bindusara was bound to eventually interrogate him further and press him for a more definite answer.

A few years later, Takshashila rebelled against the Mauryan Empire, and Ashoka was sent to suppress the revolt, indicating that he was seen as capable by his father even at that young age.

The revolt was triggered by the high-handedness and corruption of local officials and the bureaucracy, and revolts for similar reasons became increasingly common in later periods. The Indian North-West, while firmly under Mauryan military control, was a region with heavy Indo-Greek and Persian cultural influence (One of Shoka’s inscriptions in Afghanistan is in Greek and Aramaic, in fact), and also had a significant Indo-Greek and Persian population, due to previous invasions and migrations. This further contributed to its rebelliousness, making it a vital frontier province, and an area of geopolitical and cultural contestation. It also was the gateway to India, and thus of vital strategic significance.

The citizens of Takshashila surrendered bloodlessly on Ashoka’s arrival and disbanded the militias that they had formed, saying they had no quarrel with Bindusara or Ashoka, and claiming that they had just wanted their grievances to be heard and acted upon. After suppressing the revolt, Ashoka went to the kingdom of the Khasas, where he was likewise given a warm welcome, where he met and recruited two warriors (possibly Greek mercenaries) who served as his bodyguards henceforth and played a crucial role in his seizure of the throne later. Ashoka thus proceeded through the Northwest, successfully pacifying it.

As a reward for his suppression of the revolt, Ashoka was made the viceroy of Ujjain.

On his way to Ujjain to assume office, Ashoka halted at Vidisha and met a woman named Devi, the daughter of a merchant. He made her his concubine and bore him a son, Mahendra, and a daughter, Sanghamitra. (Many argue that she was his wife, but there is no mention anywhere of him having married her, and he did not bring her to the capital after he took the throne, so it is likely that he did not marry her. Also, the fact that his son by Devi, Mahendra, became a monk, even though at that time Ashoka was already the Emperor, and he would have been the heir to the throne if he was legitimate, is suggestive of this fact.)

Meanwhile, in the capital, one day, while the crown prince Sushima was returning from a ride outside, he met the Prime Minister Radhagupta, and playfully slapped him on his bald pate. This was the last straw for Radhagupta, who was fed up of the misbehaviour and arrogance of the crown prince, and he began plotting to deny the crown to Sushima once Bindusara died, with the help of the other ministers.

Some time later, a revolt broke out again in Takshashila, and this time, Sushima was deputed to quell it. But as he struggled to do so, Bindusara became gravely ill.

He summoned Sushima back to the capital and Ashoka from Ujjain, intending to install Sushima on the throne and send Ashoka in his stead.

The ministers, however, had other plans. On their advice, Ashoka feigned illness and pleaded that he would not be able to replace Sushima in Takshashila. Bindusara’s condition began to worsen, and his ministers began to urge him to crown Ashoka. But Sushima was Bindusara’s choice, and he refused to budge.

As the ailing Bindusara passed away, Ashoka crowned himself Emperor in Pataliputra. Hearing of the crowning, Sushima rushed back to the capital with his troops. Ashoka barred the gates with his troops, augmented by Greek mercenaries.

Sushima tried to storm the city and failed, and was thrown into a burning pit filled with hot charcoal. Ashoka then massacred his remaining brothers (except his uterine brother Vitashoka) and their supporters at court. After four years of purges, Ashoka was finally secure enough in his hold over the Empire to ascend the throne as its unchallenged ruler.