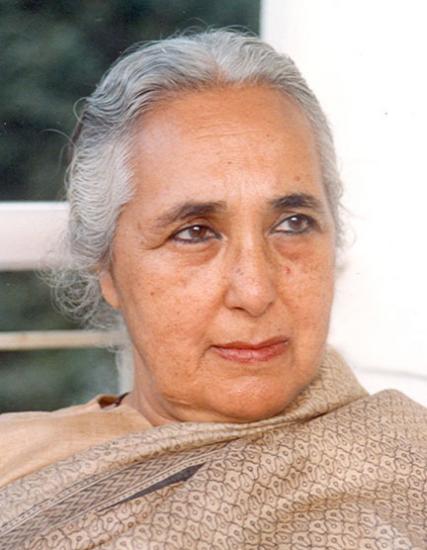 India is definitely a land of surprise and shock. Nothing else explains the fact that despite a change in regime at the centre, the controversial historian Romilla Thapar is back in business courtesy Janaab Najeeb Jung, the eminent Lt. Governor of Delhi.

Romila Thapar is now one of the coopted members of the high profile Delhi Urban Heritage Foundation or DHUF. In other words, she’s back in the business of being an eminent historian.

This high profile Foundation is headed by Delhi’s Lt Governor, Najeeb Jung, who is said to be greatly interested in preserving the urban heritage of Delhi. To this noble end, he has appointed the self-anointed eminent historian and another left-liberal, Amar Farooqui even as the likely outcome of the general elections 2014 was being debated on 24 /7 television channels.

For decades Romila Thapar has been a controversial historian, an avowedly Marxist and anti-Hindu and pro-Muslim historian. She courted massive controversy when she wrote the partisan and garbled versions of ancient Indian history for textbooks approved by the National Council of Educational Research and Training ( NCERT). Many texts of her books had to be re-edited and re-written in the year 2002 during the NDA regime. There were serious allegations against her of twisting historical truths by several well-known historians: left liberal and sham-secular educationists excluded. No wonder, her nomination to the DHUF has raised the eyebrows of several non-leftist historians and experts on the conservation of Indian heritage.

On the face of it, the Delhi Urban Heritage Foundation does not appear to be seriously concerned about preserving the real ancient heritage of Delhi. Although it has identified more than 1200 heritage structures for conservation, its focus all along has been on non-Hindu architectural sites.

In a meeting chaired by the Lt. Governor, it was decided to undertake the renovation and landscaping of the following two allegedly important heritage sites:

Next, the members of the DUHF present in the meeting of June 16 , 2014, presided by the Lt. Governor reviewed the progress of restoring the Sultan Garhi tomb, the Anglo-Arabic High School at Ajmeri Gate and the Architectural Park at Mehrauli .

Apparently in their infinite wisdom, the members of DUHF have decided that the first priority has to be accorded to the restoration of tombs of Muslim seers and structures ostensibly in deference to Dr. Manmohan Singh’s ‘Muslims First’ policy statement made on December 9, 2006 in a meeting of the National Development Council. No wonder, for the DUHF, the history of Delhi begins with the Muslim rule and ends with the British occupation of Delhi.

It is time that the Lt. Governor and his learned teammates including Ms. Thapar stopped the phoney restoration work of tombs and so on. They must reread the long and celebrated history of the non-Muslim and non-British era before these barbaric invaders ransacked Delhi.

According to this well recorded history, the city of Delhi has the following five ancient temples dating back to the Mahabharata period:
i) The Hanuman temple in Connaught Place which has a self-manifested Murti of Bal Hanuman – also known as Bajrang Bali (child Hanuman).

ii) The famous Kali temple at Kalkaji containing a Murti of Maa Durga sculpted in rock. Twice every year, celebrations are held at the temple during Navaratri.

iv) The ancient Bhairava temple near Purana Qila; and

In addition, there are several other temples including Shri Gauri Shankar temple in Chandni Chowk, and a number of Jain temples and Gurudwaras of historical importance dotting the national capital. Most of them urgently need restoration and ornate landscaping.

It is a mystery why the Delhi L.G. is not interested in the restoration and landscaping of scores of Hindu and Jain temples of Delhi including a number of Gurudwaras of historical importance. But with Romilla occupying the centre stage in the Delhi Heritage Foundation, it looks like mission impossible.

I am not a professional historian. But before I get to the conlusion, I would like to make a submission.
Why is it necessary for Indians to confer the title of heritage structures on the burial places of invading tyrants and the so-called holy men accompanying them?

Sometime in the middle of the year 2008, there was a news item in the mainstream English press bemoaning the dilapidated condition of the tomb of Ghiasuddin Balban. It was argued that the tomb of this great slave king was an important ‘heritage’ structure which ought to be renovated and protected for the benefit of the posterity.

Now who was this Balban who we are told, needs to be regarded as our pride, our heritage, and who must be presented to posterity as a representative of our glorious tradition? Was he a benign ruler fit to be glorified as a national icon? According to Minhaj Siraj, a Muslim historian and contemporary of Balban, the slave king waged a war on the ruler of Avadh, King Trilokyavarman of Chandela dynasty, and after defeating the valiant king carried away his wife, sons and dependents as slaves. Balban had twice attacked the kingdom of Bhojpur (in today’s Bihar) and in the process enslaved a large number of women and children. Similarly in Katihar (located in today’s Bihar), he had ordered a massacre of all male children above eight years of age and enslaved thousands of hapless Hindu women. This savage Balban also attacked Mewat and Shivalik regions, ravaged the kingdom of Ranthambore, and made a proclamation that any soldier of his army who brought alive a captive kaffir (Hindu) would be rewarded with 2 silver tankahs and the one who brought the head of a killed Hindu will be rewarded with one tankah.

I don’t know why the Archaeological Survey of India has been hell-bent on erasing these acts of wanton barbarism by Balban by falsely presenting his tomb as something which the Indian people and posterity should be proud of.

Unfortunately we have a large battalion of sham-secular busybodies like Romila Thapar who have turned the word “heritage” on its head by bestowing unwarranted national pride and high status on alien invaders who ruthlessly killed lakhs of innocents, destroyed thousands of beautiful temples and mercilessly pillaged our glorious heritage.

Indeed, time has come to make our historians and archaeologists understand the true meaning of the word ‘heritage’. If necessary, it should be done by making them go through a course in de-schooling. In no other country are charlatans masquerading as protectors of our heritage are honoured like in India. In any case, the structures and landmarks of plunderers and murderers need not be restored and exalted as national pride.