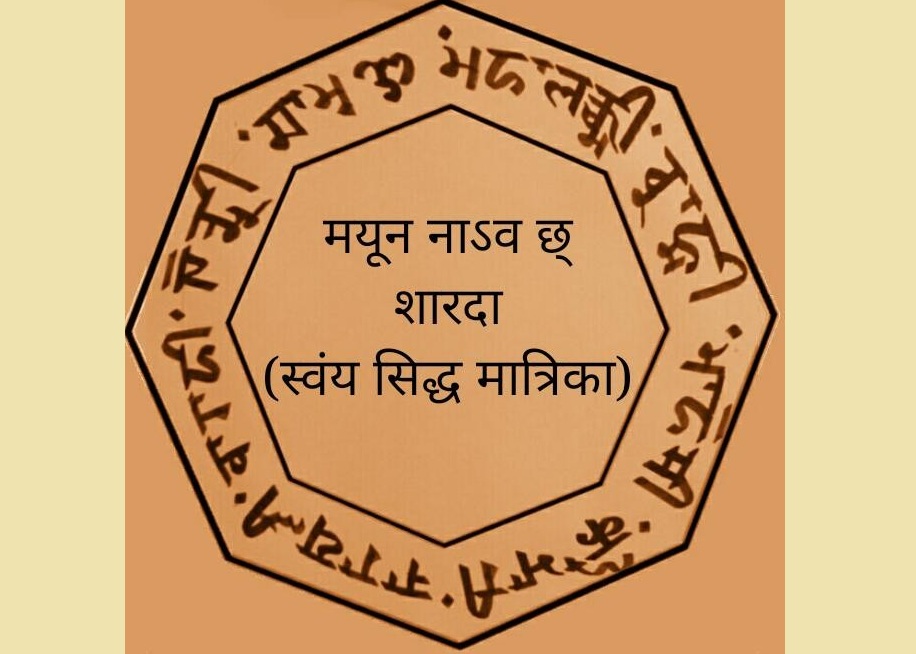 Kashmir, the Land of Śāradā considered as Sarvajna Peetha (the seat of all Knowledge) has always been the land of Rishis just as it has been the home to scholars in various fields of knowledge. It was even noted by Hiuen Tsang during his visit in the 7th century CE that Sanskrit was being spoken very fluently even by women and children of Kashmir. People used only Śāradā as the main script to write Sanskrit.

Śāradā script is a writing system based on Brāhmī family of scripts and was well flourished even in Himachal Pradesh and Punjab in the 13th century CE. Śāradā texts have been widely found in Afghanistan; one of them was engraved on a marble statue of the Indian elephant-headed god Ganesh that was found near Gardez. Another was inscribed on the large Uma Maheshvara from Tepe Skandar, north of Kabul. The Śāradā inscriptions all seem to date to the 8th century CE.

Between 750 and 1000 A.D., the Shahi’s issued silver coins to provide currency for eastern Afghanistan and Gandhara. Most of the coins have an obverse legend in either Spalpati Deva or Samanta Deva, which are in Śāradā scripts. Also, the well-known scripts like Gurumukhi and Takri were actually derived from Śāradā script

Alberuni in his writings calls it “Sidha Matrik”, since the alphabets in Śāradā always begins with “ओम् स्वस्ति सिद्धम्”. Birth records, horoscopes etc. were written in this script. During the ceremony of Yajnopavita (Mekhala), the Kulaguru (the family priest) used to teach the celibate student (Brahmachari), these alphabet of Siddha Matrika (old form of Śāradā) on the wooden piece, a tradition, which continues even today.

The Kashmiri translation of Bible was published in 1822 A.D. in the Śāradā script. Then its second edition appeared in Nastalik. The will of saint Maqdoom Sahib written in Śāradā and Persian scripts has enhanced the importance of S.P.S. Museum, Srinagar, where it is housed.

It is believed that there is a good haul of Śāradā manuscripts in several places in the country like Nalanda, Hoshiarpur, Madurai, Chennai, Mysore, and also in Nepal. George Buhler, it may be recalled had collected Sanskrit manuscripts from “Kashmir, Rajputana and Central India”, and published his report in 1877.

A number of foreign scholars have done considerable work on Śāradā script: (1) George Buhler in his memorable work, “Indian Palaeography”, (2) Leeche in his “Grammar of the Cashmere Language”,  (3) Sir George Grierson in his paper in the “Journal of the Royal Asiatic Society”  and also in his note in the “Linguistic Survey of India”.

There are many manuscripts in various libraries in India written in Shāradā, but unfortunately there is no one to work on these. Hard to even imagine under what hardship they would have been written. Many social and political reasons resulted in the downfall of this script, which is beyond the scope of this article.

But, it is important to note that today Kashmiri Pandit community is going through a very difficult time and being away from their roots have made it difficult for them to maintain their culture and language. Being a member of community each one of us have a responsibility towards preserving our culture and identity and Śāradā script represents a unique identity of Kashmiri Pandits. With sincere effort and a dedication towards our Mā Śāradā, we can revive the script.

Since, the Śāradā script is based on Devanāgarī, it is not very difficult to learn. Here are a few pointers towards learning Śāradā:

The Kashmir Files: An Inconvenient Truth

I am a Hindu and I am Sick and Tired