The Kashmir Files: An Inconvenient Truth 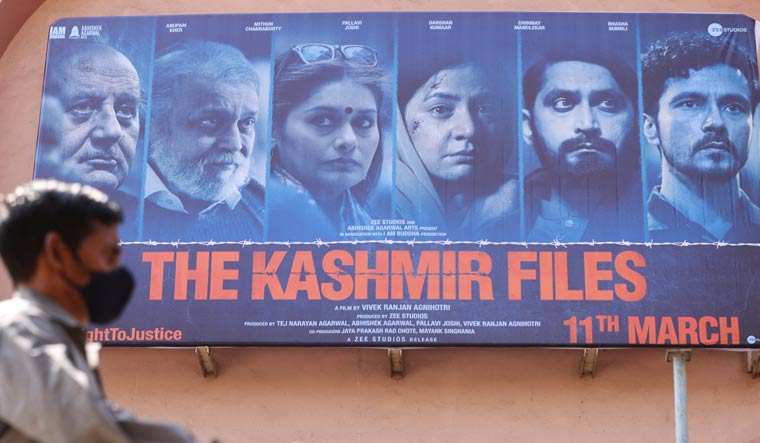 Many in the diaspora who know of Birmingham, England, will be aware of its links to the Kashmir issue. In 1984, Indian diplomat Ravindra Mhatre from the Consulate in the city was abducted and murdered by two Mirpuris. Today, more than ever, the substantial POK origin population has a strong influence over the local council and national parliamentary seats and so the appeasement for segregationist “self-determination” and a strong anti-Hindu, anti-India stance carries considerable ballot box weight for any serious aspirant.

Tragic first-hand accounts of ground realities of systematic religious persecution leading up to 1990 and beyond shared by displaced Kashmiri Hindus living in Britain have done little to dent the narrative, which British politicians and media have digested and regurgitated over the past decades.

One might therefore consider oneself prepared for what Vivek Agnihotri’s “The Kashmir Files” (TKF) has in store for the viewer.

I was proved wrong. Nothing that I have read about those events in Kashmir nor any similar historical accounts of genocide on film compares to the gruesome reality that TKF so graphically captures. That the director stated he had to tone down the actual violence of some of the incidents for the film makes one shudder at the thought of the real horrors that took place.

This is a small-budget film with a humongous impact. Barely 10 days after release, it has already grossed over ₹210 crores and is set to break many records.

Artistically, TKF is stunning — the low-lit settings whether of the narrow lanes of Srinagar, a pine-clad village and its sawmill, the icy grey of Dal Lake, the bleak, cold tents of Jammu where the surviving victims lay abandoned for years, or the reductionist concrete of the university setting that celebrates Mao and Marx are in perfect sync with a deeply melancholic, pathos-filled musical score. They combine to provide a canvas for a brutally honest script, much of it derived from first-hand accounts of the victims, newsreel archives of interviews and speeches of politicians and perpetrators, and, most importantly, the obfuscations, double-speak, and outright collusion with and even justification of terrorism by media and activists in academia.

After two and a half hours, TKF leaves the audience numb; as the credits roll and the lights go up, many are still in their seats, shaken. The final scene is so horrific and gut-wrenching that it leaves a cold, lingering, disoriented feeling of rage and dejection in the psyche.

The film makes clever use of a non-linear narrative to tell the story, flashing back and forth between 1989 and the present day through a tight sequence of powerfully gripping vignettes woven together to present a historically accurate account of various incidents. There is no wastage – around 700 interviews were documented in the research; and every scene, every dialogue, and each closeup is thoughtfully crafted to maintain a gripping storyline.

Much has been said about the sterling performance of Anupam Kher, himself a Kashmiri Indian, as Puskar Nath Pandit, and so it is fair to reflect on some of the other characters. Krishna Pandit played by Darshan Kumar sits at the apex between his professor, Radhika Menon, played by Pallavi Joshi, and Mithun Chakraborty’s character of IAS officer Brahma Dutt.

The way Krishna navigates his way through the morass of information and disinformation during his interactions with these two individuals, who each end up being his coaches, is a triumph not just of self-discovery by each of these characters, but of a process by which the truth unravels.

While Krishna’s speech as student president aspirant is the spiritual and civilizational high of the film, the smouldering activist powder keg of Radhika’s presence, so brilliantly portrayed by Pallavi Joshi, is no less an achievement than the transition from a weirdly dichotomic position of powerful helplessness to a sense of retired atonement that Brahma feels, being so sensitively played by Mithun.

Vivek Agnihotri does not offer solutions. Indeed, that is not the job of a filmmaker, and in this film, like the best directors, he restricts himself to merely telling a story that informs and educates. And, if along the way to gripping the audience the story manages to motivate some towards thought, reflection, and action, then all good.

Unlike the Holocaust as depicted in the Schindler’s List, the Kashmir genocide is not known to many outside India, and those in India who do know of it, just like the previous six genocides dating back to the 14th century, have successfully continued to deny it and have blotted it out of history and memory.

However, make no mistake, for the genie is out of the bottle, and it is not going back in. The atmans of Sharda and Shiva which reside in each Indian are surely being awakened.

Indians will surely find ways to deal with this challenge, and the past week or so has shown that the churning has begun and is sure to get more intense. Those who are still glorying, not just in denial but also celebrating the genocide of 1990 and even other ones, are deluded into thinking that TKF is a blip and life will get back to normal. But, it is doubtful that Indians will happily accept secular, masala-mix romanticisation of the Ganga-Jamuna Tehzeeb variety that has been prevalent both in school history and in films on Kashmir.

In this regard, the characters of Radhika, Brahma, and Krishna offer hope: thought and reflection on what it means to be human, how Indian society may sustain itself better, acknowledging history in full, with a shared determination to learn from the horrors of days past; in short, learning, developing, and being what it means to be Indian.

Perhaps, Indian academia and media who have for so long normalised the belief that the human story of India can only be seen in terms of hierarchy, where power or oppression are deemed to be the sole currency for any type of human interaction or organisation, can start with what good academics ought to do: self-introspect, and where they re-examine the fallacies of their alleged pursuit of humanism, which instead of progress, only bear bitter fruits with detrimental cost to society.

Dare we dare hope to see a change where history is critically studied and re-evaluated so that simply being Hindu is not deemed as the default oppressor in Indian society, and where the decolonization project is not just restricted to the impact of Europeans, but which includes the devastations visited by previous colonisations of the indigenous cultures and traditions of India?

Dare we dare hope to witness maturity in public discourse wherein historical events are dealt with through measured reflection, and where remorse and regret are central and pre-conditional to reconciliation, repair, and reparation?

Dare we dare hope that good women and men with administrative and political power have the courage to reflect and act with transparency and on principle?

Dare we dare hope that, regardless of creed or class, region or religion, every Indian sees that TKF is their story and that ideology and identity cannot stand in the way of truth?

Perhaps then, conversation on the Kashmir issue not just in India but everywhere, whether between old friends, rival politicians, or global media is founded on truth, empathy, humility, and above all, humanity.

For, far more importantly, this is a film for the ages. It is the story of indigenous people with a long and rich history, whose culture and traditions were created and shaped over millennia, which intermingled and spread across the whole subcontinent, and that they are both a part and the whole of the Atman that is India.

It tells the unadulterated truth of the genocidal tragedy visited upon Kashmiri Hindus because they were Hindu by perpetrators who were not just ethnically the same, but many of whom were neighbours, colleagues, and friends.

In such matters, seeking balance is not just amoral, it is immoral, it is inhuman, and it is beneath contempt.

Go watch it. Tell your friends about it, encourage them to see it. Talk about it.

It is in fact, the story of US ALL, however we self-identify, so let’s do everything to not let it happen again.