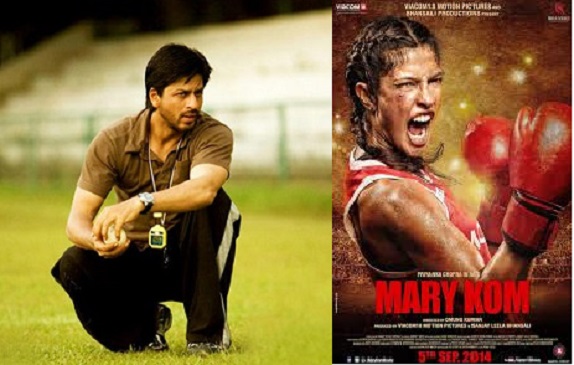 After Secularization of the Constitution, of Politics, the Judiciary, Education, Art, Literature, Media, Film, etc, India is witnessing the secularisation of Indian Sports. It is difficult to exactly pinpoint when and where it all started.

Did it start after a certain Mohammed Azharuddin who was banned from Indian Cricket for Match Fixing was given a ticket for parliament by Congress and he won the election?

Or did it start when Jammu and Kashmir Chief Minister, Omar Abdullah expressed his disappointment on twitter  that the cricketer Parvez Rasool from J&K was not given a game or two, after India took an unassailable 3-0 lead against Zimbabwe?

On that occasion he had tweeted :

“Did you really have to take him all the way to Zimbabwe to demoralise him? Wouldn’t it have been cheaper to just do it at home?”

Even the then ‘Tweet a Minute’ Union Minister of State for Human Resource Development, Shashi Tharoor, tweeted:

“Greatly disappointed that Parvez Rasool is not playing today. Bizarre selection! Could easily have rested Jadeja & Raina for Rasool & Rahane.”

(What an excellent way to build harmony between Jadeja and Rasool. I must admit that for making his tweet truly secular, he had also suggested dropping Raina for Rahane)

Or did it start after news reports revealed that national level shooter Tara Sahadev was cheated into marriage by Rakibul Hasab aka Ranjit Kumar Kohli who assaulted her because of her refusal to convert to Islam?

Or did it start after Sania Mirza married Shoaib Malik a Pakistani Cricket player?

Or did it start when, several politicians spoke for Sania Mirza being Telengana’s Ambasador but none of them spoke for Sarita Devi being not only unfairly denied a silver medal but also wrongly punished for expressing her sorrow?

Or did it start when,Shah Rukh Khan, the owner of the Kolkata Knight Riders, said it was “humiliating” to see none of the Pakistani players being picked up in the IPL auction after 26/11 massacre in Mumbai?

Or did it start when Rahul Dravid attending Surya Namaskar became communal?

Or did it start when Gul Mohammad, Abdul Hafeez Kardar and Amir Elahi after representing India in 1950’s left for Pakistan and represented Pakistan?

While I am confused about the origin of secularization of sports in India, fortunately Ayaz Memon came to my rescue. He enlightened me with his column “Religion was once inseparable from Indian Cricket”  on 7 September edition of the Sunday Mumbai Mirror .

My enlightenment was accidental (most instances of enlightenment are). He wrote the article to defend Ahmed Shehzad. After all it’s the duty of Indians to defend Pakistanis, whether it is their terrorist activities or firing at the border.

This is a sign of secularisation. This trend was set by great writers like Sir Muhammad Iqbal and Saadat Hasan Manto, who supported creation of Pakistan. After their death Indian intellectuals outsourced all thinking activities of Pakistan to themselves.

Ayaz memon was defending the following:

While the players were walking back to the dressing room in Dambulla, Sri Lanka after their one-day international last Saturday, Shehzad was caught on Camera  telling Dilshan “if you are a non-Muslim and you turn Muslim, no matter whatever you do in your life, straight to heaven.” Dilshan’s reply was not audible, and Shehzad went on to say, “Then be ready for the fire.”

Ayaz Memon did defend it in style. He wrote all kinds of excuses which Shehazd may not be able to think for himself; reminded me how secularists like Mani Shankar Aiyer try to make all kinds of excuses for killings of Indians by Pakistanis. Best excuse of Ayaz Memon is that even in pre-partition days India had religion based cricket teams and how Hindus didn’t allow people of other religion to play for their club, as if Muslims allowed people from other religion to play for theirs.

Before I proceed further I must talk about this heaven that Shehzad was selling to Dilshan.

Mohammad Yousuf  formerly Yousuf Youhana a player of Pakistan cricket team declared in 2005 that he converted to Islam three years back. Yousuf was banned from playing international cricket for Pakistan, for an indefinite period by the Pakistan Cricket Board on 10 March 2010, following an inquiry into the team’s defeat during the tour of Australia. On 29 March 2010, Yousuf announced his retirement from all forms of international cricket.

However, following Pakistan’s disastrous first Test against England in July/August 2010, PCB asked Yousuf to come out of retirement. He never played for Pakistan after 2010. So much for ‘Heaven’ for Yousuf Youhana after his conversion to Islam.

An article by Boria Majumdar, a Rhodes scholar and Doctorate from Oxford and sports journalist titled ‘Something About Mary’ in Economic Times completely secularised Indian sports.

One of the best things to happen to Indian Olympic sports in recent times is the immortalisation of some of the success stories in the form of biopics. A trend that started in earnest with Chak De! India was carried forward by Paan Singh Tomar and Bhaag Milkha Bhaag. Now it’s the turn of Mary Kom that releases today.

…… Chak De! had brought to the fore the agonies of a failed Muslim sportsman within the larger narrative of gender discrimination in sport. It looked into the sensitive issues of identity and prejudice that a botched sportsman from a minority community faces, while eventually helping him triumph in the face of acute adversity. Anyone who is aware of the trials and tribulations faced by Mary Kom in her growing up years will recognise the striking similarities.”

This eminent Historian has not only called Chak De! India a biopic but also concluded how minorities are discriminated against. Add to this the tweet of Omar Abdullah and lo and behold secularisation of Indian sports is complete.

Now let us look at the facts of Chak De! India.

Mir Ranjan Negi, was the goalkeeper of Indian hockey team in 1982 Asian Games against Pakistan, where India lost 1-7. India went into a mourning and Negi into hiding.

Jaideep Sahani author of Chak De! India had read a small article about the winning of the Gold at the 2002 Commonwealth Games by the India women’s hockey team and thought that the premise would make an interesting film.

So much for Chak De! India, being a biopic about prosecution of Minorities in India. May be a couple of years later this eminent Oxford educated Historian will write that in fact the real sportspersons were Irfan Khan and Farhan Akhtar while Pan Singh Tomar and Milkha Singh were fictional characters created by fanatic Hindus. I wonder what this eminent historian will have to say about the rise of Pathan brothers from abject poverty.

Incidently, Chris Cairns, 44 – one of the most flamboyant and talented cricketers to ever emerge from New Zealand currently involved in match-fixing allegations is driving trucks and cleaning bus shelters for $17 an hour to foot legal expenses.

Friends, nothing better can be expected from Oxford, Cambridge historians. All that I am trying to achieve here is to draw the attention of my friends sitting on the fence of secularism. Please have a look at how history is being distorted. This is how the Mughals became great and Manu became the baddie. It is still not too late, still Indian history can be salvaged. Let’s clear the fog created by secularists before it becomes an unassailable wall.

Indian History in Perspective – 3 : How India Culturalized the World