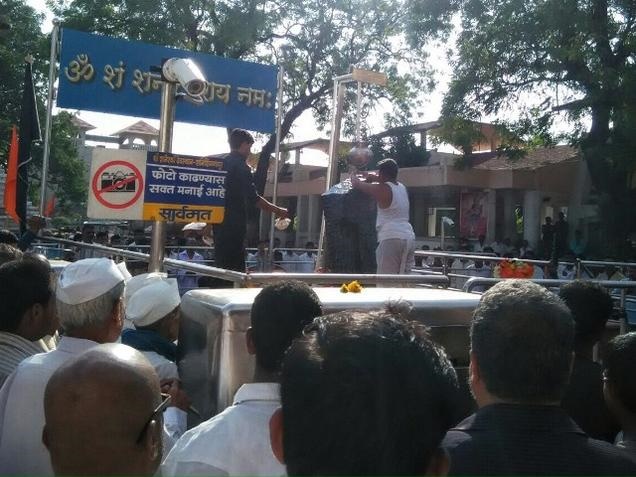 The famous British mountaineer George Mallory is supposed to have replied the question “why did you want to climb Mt Everest?” with a cryptic “because it’s there”. Unfortunately the attitude that symbolized human spirit and never say die attitude in a mountaineer is quickly becoming bane of the civilised society in the 21st century. The group of women set to “storm” (helicopter on standby) the Shani Shingnapur temple are the latest example of this excessive behaviour.

Before I being discussing the issue at hand, I am going to give a large concession to the feminists agitating against the temple administration (and public at large). The said concession being, there are really parts of the temple that women are forbidden to enter, and men are. If my twitter feed is anything to go by, even that part if murky but since I feel it has no effect on the outcome of my arguments, I am going to get it out of the way. See, I am a reasonable guy.

Having given that concession, there is no disputing that the Stormtrooper (hehe.. go on! sue me) ladies are making this attempt today due to the following factors.

This stunt has that “heads I win, tails you lose “feel to it, since if the women are successful in storming the temple, they (and their backers, make no mistake about it, they have backers whose only interest is humiliating Hindus) would have the satisfaction of having humiliated Hindus once more. If they are not successful, and indeed stopped by police from entering the temple, they can go on perpetuating the right wing thugs”/patriarchy/ Police state narrative that their other NGO/Left wing buddies can use when it suits them. Like Gary Sinise tells Nick Cage towards the end of ‘Snake Eyes” – its Snake eyes kiddo, the house wins.”

Now let’s discuss why this stunt has neither religious nor moral standing.

The first argument extended by these Stormtroopers is “equality before law” which sounds very pragmatic and obvious (and hence supported by a few centre of rightists ) but has a fundamental flaw when you examine it up close. The “equality before law” argument implies, that religion is subjugated to law, at all times. Let me repeat the last three words. At all times. Now when a tenet of religion results in harm to an individual or a group, or if it keeps an opportunity of advancement away from the aforementioned group or individual then by all means law should step in. We are not after all a theocratic state that throws gay people from towers or allow pregnant women to die rather than give them an abortion. We are liberated and we must feel proud of it.

However, even the biggest supporter of this protest will struggle to explain to me what danger this temple entry restriction places women into. Or what opportunities (other than the one to offer prayers, an opportunity that has no socio-economic value in its strictest sense)  it denies them. All it does is to place a restriction on them, in a place outside their own homes.  To deny religion this freedom to place restrictions on individuals or groups in such limited manners is effectively subjugating entire religion to law.  This kind of legal authoritarianism is a hallmark of regimes like China (where they forbade Muslims from fasting and men from growing beards).  I am not sure I want to live in a police state like this.

The second argument is of course the slippery slope argument, that says if you allow this then what is to stop religions from forbidding entries to women from all temples or placing restrictions based on caste/religion etc. Unfortunately this is only an academic argument. It is sort of like saying if you allow gay people to marry each other, it may lead to a man marrying his dog next.  While taking a decision based on a future risk, one must make a realistic assessment about how clear and present the risk is.  In a country of literally millions of temples if there are fewer than a hundred (I am being generous here, I only know two such temples) places with such restrictions and no new place with similar restriction has come up in say last two hundred years or so, then the slippery slope argument is purely hypothetical and hence does not merit consideration.

It is also important to separate these nihilistic Stormtroopers from the leaders of past who agitated against unfair restrictions placed by traditions. Like (most famous case from my state) the ‘chavdar tale Satyagraha ‘(also known as Mahad Satyagraha) by Dr. B. R Ambedkar. Two important distinctions needed to be made here.

Contrast this with the case in hand. The commodity being denied (if it is indeed being denied) is entry in a temple. Come on folks, some sense of perspective please. Not entering the temple is not going to kill you. All that is at risk is your own ego.

Equally importantly, the restriction put on women is not only acceptable but actively endorsed by a majority of women. These women are natives of the place as well as  highly educated, abroad living urban women whose egos are not so fragile that any restriction placed by religion is immediately seen as a sign of good ol’ patriarchy at work.  Again my faith in religion’s absoluteness forbids me from making this suggestion but if indeed a referendum is held on this issue, I am confident that more women will vote against it.

Also not to put too fine a point to it, folks who drank water from the Mahad tank kept drawing from it for the rest of their lives, since it was an essential commodity for them. The Stormtroopers in this case will come, breach centuries old tradition and go on fighting other causes ( an agitation against armpit shaving perhaps  ) while the priests who have cared for the temple for generations will be left to care for it once again, only this time with the knowledge that the temple they have devoted their entire life to has accorded them no privileges to practice religion as they see fit. If there is anything more sickening and more disgusting than abusing a person of his faith and then make him go on living like nothing has happened, I don’t know what it is. We have all heard of tales of Hindu women force fed beef during partition riots. This is the less violent version of it.

The last (and most laughable) argument extended by these Stormtroopers (when cornered with the question about atrocities against women in other religion) is “I am going to care for my religion, why should I worry about other religion?”.

Well ladies, when Falvia Agnes quoted in an interview with Avni Choksi “But after independence, the same women realised that it is important to bring changes for Hindu women as they lagged behind their Muslim and Christian counterparts” she has also put forth the argument why it is perfectly ok for Christian or Muslim women’s right advocates to agitate on behalf of Hindu women.

And since none of you protested against Flavia’s stance then (this interview was published in last August) I am just going to assume that this argument was acceptable to you. Now why you have reversed this argument is what is tripping me.

Again (I am being generous here I already told you) even if you decide to accept this argument for some reason, let me ask you this- is this the biggest problem Hindu women are facing today? A 17 year old girl in Bihar committed suicide yesterday because she did not have a toilet inside her house.  An estimated 65 % women folks do not have access to feminine hygiene products, 1 out of 4 girls from rural India drops out of high-school after attaining puberty because she does not have adequate protection during her menses. An estimated million women have gone to jail or have faced harassment at the hands of police due to the rampant misuse of the 498a section of the IPC and you went with entry into temple? Good call Ladies.

Stripped of all its civil rights and gender equality cloak, this movement can only have two implications. One will show these Stormtroopers in an unfavourable light. Other will show them as active evil. I am leaving the choice to readers.

So why fight them?

Because it matters, not only to peace loving Hindus, but to women of all religions. Today’s public discourse has short memory and even shorter bandwidth. Each cause gets its limited bandwidth, and if women’s rights bandwidth gets used by Stormtroopers planning to jump on top of temples, then girls committing suicide due to lack of sanitation tend to get neglected. And we can’t allow that to happen.

And also it matters because we are proud to be member of a peace loving religion and when peace loving, law abiding citizens like you and me and the towns-folks of Shani Shingnapur get bullied out of the social discourse by these pantywaist fascists who will not listen to reason, the fanatics amongst us tell us “ok guys you had your turn at the bat and you failed to protect us. Now step aside and let our clubs and swords do the talking “(again don’t take it literal, you miserable, no good bunch of liberal word Nazis).

When America allowed the left bullies to stifle all those sane rational folks who wanted to recognize the threat of Islamic extremism, the solution to come out of conservative woodwork was “lets’ ban all Muslims”.  One thing regressive lefties do not own up to is that they are the main reason why an almost dead extreme wing right has risen again.

Oh and ladies, that helicopter you have on standby today? The women stranded in Chennai floods less than two months back could have really used that, you know what I am saying?

#ReadyToWait: A campaign to reclaim Hindu temples and traditions