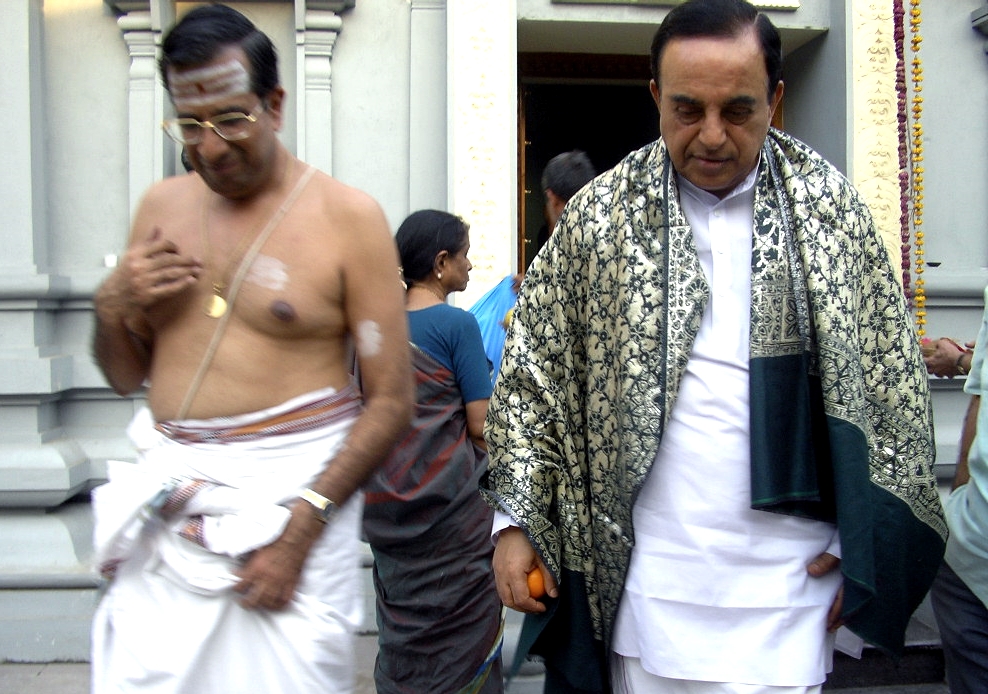 The various reactions to Bharatiya Janata Party leader Subramanian Swamy’s remark that mosques are mere buildings are typical: the man is a bigot, communal, divisive, etc. And again, typically, nobody has refuted the argument or dismissed the facts that he has provided—that mosques have been demolished in Saudi Arabia, the cradle of Islam and the most perfect Islamic state. This is yet another instance of argumentum ad hominem—attack the arguer, impute motives to his statements and assertions, and dodge his argument in this manner.

Argumentum ad hominem is the most despicable weapon used in public discourse, and it is depressing to see the impunity with which it is used. Swamy’s position is that mosques and churches are mere “buildings” to offer prayers. “So there is no problem in demolishing them. They demolish mosques even in Saudi Arabia.”

Nobody has said that it is untrue.

And nobody, not even from Swamy’s own party, has come to his defence. Not that it bothers Subramanian Swamy, but it does reflect poorly on the BJP.

The party which claims to be committed to the Ram Temple has dissociated itself from the comment that Swamy made in Assam. State BJP president Siddhartha Bhattacharya called it Swamy’s “personal views.” Swamy rightly called Bhattacharya an uneducated kind of person.

But, unfortunately, Union Minister Prakash Javadekar also reacted similarly: “We will have a talk with him on the matter. These comments, which I have not seen, must be made by him in his personal capacity. This is not the party’s stand.” What, pray, is the party’s stand? Muslim appeasement? The BJP government at the Centre has done hardly anything to tackle the problem of Bangladeshi infiltration. This is despite the fact that infiltration has changed the demographic profile of Assam.

According to The Assam Tribune, Assam is among the states bordering Bangladesh that have recorded a 7 per cent increase in the Muslim population in the 2011 census, as compared to the previous census. “The religion-based figures of the 2011 census, which have been under compilation, are finally ready and the results have the potential to generate a storm in Assam. Several districts in Assam have recorded an increase in the growth rate of the Muslim population between five and seven per cent.” (http://www.assamtribune.com/scripts/detailsnew.asp?id=sep0214/at050)

Unsurprisingly, the All India United Democratic Front, headed by an Islamist, has become a force to reckon with. Swamy’s statement should be viewed against this backdrop.

The BJP is not supporting him, and his opponents are feeling emboldened. They registered a first information report or FIR against him in the state under sections 120(B) (criminal conspiracy), 298 (uttering, words, etc., with deliberate intent to wound the religious feelings of any person), and 153(A) (Promoting enmity between different groups on grounds of religion, race, place of birth, residence, language) of the Indian Penal Code.

This is a classic case of strategic lawsuit against public participation (SLAPP), a tactic to bully and silence the opponent. Swamy is a veteran of many a litigation, so he is not bothered; in fact, he would like to use the case against him to buttress his arguments to build the Ram Temple. But SLAPP can have a debilitating effect on somebody who is not well-versed in legal matters.

Apart from ad hominem and SLAPP, there is subterfuge. On a television channel, an assortment of Muslim clerics denigrated Swamy and just ignored the example of Saudi Arabia he cited. India is not Saudi Arabia and it should follow the practices carried out in that country. If that is the case, why do they insist on everything else that Saudi Arabia does, from Muslim personal laws to Wahabbi Puritanism? Could there be anything more hypocritical?

In our country, Subramanian Swamy gets slammed roundly because he is the only political leader who openly and bravely takes on Islamic fundamentalism. He is the only, perhaps the last Hindu standing in gales of Islamist chicanery and political correctness.