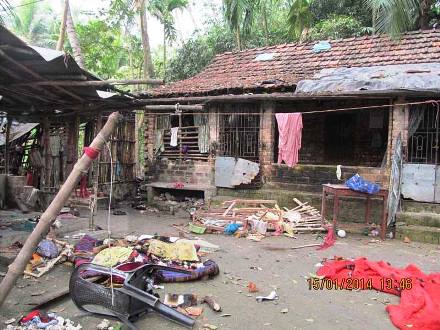 Makara Sankranti is one of the holiest Hindu festivals marking the transition of the Sun into the zodiac sign of Makara rashi (Capricorn) in its celestial path. It is primarily a harvest festival; Hindus also believe that it marks the arrival of spring in India.  Makara Sankranti is celebrated across the length and breadth of India typically on 15 January every year.

The Makara Sankranti of 2014 for the Hindus of Panchla (Howrah district, West Bengal) was marked by violence, blood, and gore. IndiaFacts gives below a brief summary of the episode.

Where and When
Panchla, Sadar subdivision, Howrah district, West Bengal, on 14 January 2014.

What
The trouble began when some Muslim participants of a rally, taken out on the occasion of Eid-e-Milad-un-Nabi  harassed Hindu girls and the Hindu youths protested. This led to large scale violence and unprovoked attack on Hindus by the Muslim rallyists.

The violence took place in the presence Trinamool Congress MLA Gulshan Mallick and the Officer-in-Charge (OC) of Panchla Police Station.

The office of the District Superintendent of Police and also the camp of Rapid Action Force (RAF) are situated in the vicinity of the location where the attack occurred. Equally, the Panchla Police Station is only 3 km away.

Outcome and action
Hindu houses and shops have been looted and damaged. Some Hindus have been injured in the attack. Affected Hindu villages are Kolepara, Santrapara and Pachalpara.

Hindus are terrorised and traumatised, and some have fled their houses never to return.

As of now, a massive contingent of the RAF has been deployed in the area.

The following are the images of the properties damaged by the Muslim mob. Image courtesy: Hindu Sahmati.

The following is a partial list of the Hindu victims in Panchla:

1) Residence of Shibnath Ray, a professional mason. His house was set afire after it was ransacked.
2) Residence of Amar Ray. While two cows have been looted, another cow was slaughtered. Even the cistern was also not spared. It was damaged as a result of heavy bombing.
3) The grill factory of Asit Pachhal was ransacked.
4) The embroidery factory of Ajit Koley was looted.
5) The attackers ransacked and looted the private chambers and the house of Dr. Raghu Karmakar.
6) The chicken shop of Subrata Manna was looted.
7) A furniture shop owned by Banshi Pachal–who also sold the furniture himself–was pillaged.
8) The snack-shop of Gora Sahu was looted.
9) The residence of Bulbul Koley was attacked and bombed resulting in the injury of a cow inside the house.
10) Fields of betel leaves in both Hazrapara and Daspara were destroyed.

Large parts of West Bengal have recently become the targets of wanton aggression by Muslims against Hindus. Howrah is no different.

In 2007, a similar incident of unprovoked violence against Hindus occurred at Panchla Bazaar. This caused the exodus of a large number of Hindus who have never returned.

Similarly, in 2010, there was another attack against Hindus at the instigation of a school headmaster, a Muslim named Dil Bahar in Panchla. Hindus in Hakola and Kulat villages were the targets of Muslim atrocities which included but were not limited to the molestation of Hindu girls and women. The complete account can be found here.

IndiaFacts information for citizens concerned with the horrific incident:

Concerned citizens from all over India can call this number any time and politely inquire and follow up the status of the incident. Public pressure on the police will go a long way in helping deliver justice to the innocent Hindus who were traumatised for no fault of theirs.