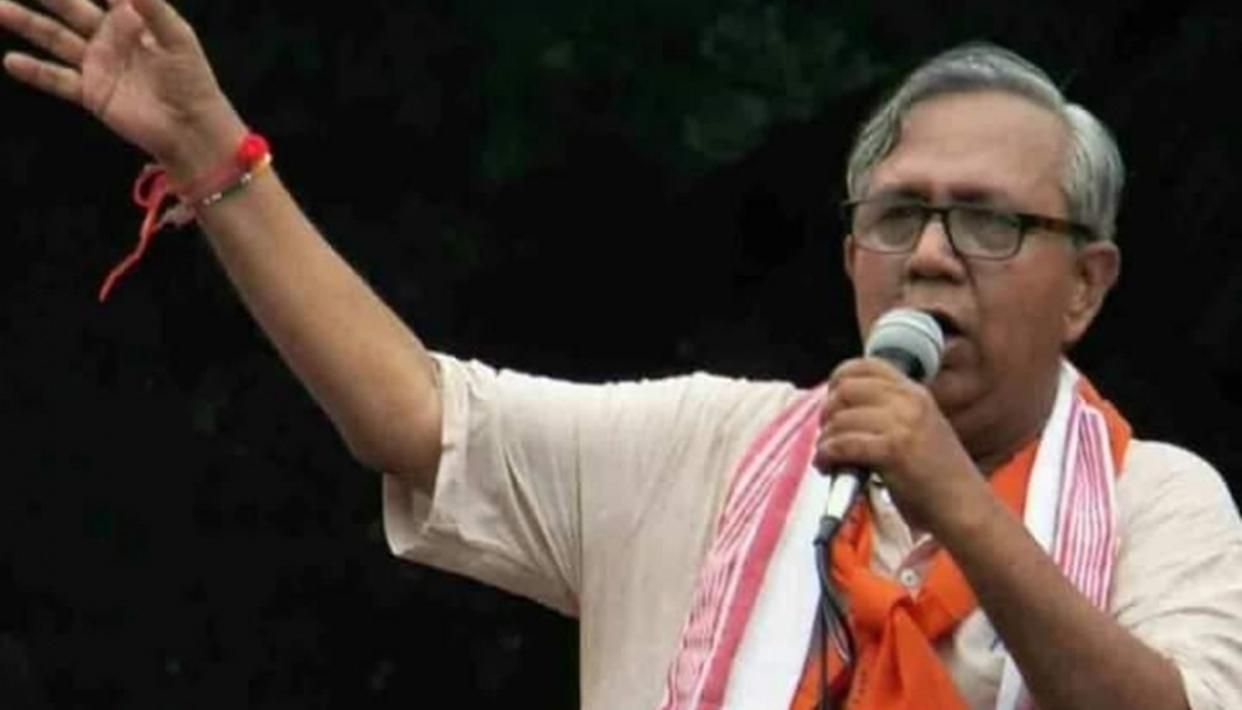 Tapan Ghosh the Hindu Warrior of Bengal passed away on 12th July. He was suffering from COVID19 and had been hospitalized for more than a week. It is a great loss to the Hindu community and the Hindu movement. He was one of a kind.

Tapan Ghosh is a name which was known above and apart from the organizations that he worked in. He raised the voice of the persecuted Hindu community of Bengal. He raised the voice for a population which formed no vote bank and had no political voice of its own. He raised the alarm of illegal Bangladeshi Islamic immigration into Bengal making everyone aware of the threat that it posed to not just Bengal’s but India’s integrity.

While the demographers worked with the Census data, he added the felt experience of the dispossessed Hindu Bengalis who felt the brunt of the illegal invasion of Bengal. While the official reports talked about much needed statistics, Tapan Ghosh brought out stories of persecution, individual experiences of those who were bearing the brunt of radical Islam on ground.

He did not just raise his voice. He did active work for decades in one of the hardest states for Hindus in India: West Bengal. He was often critical of the policies of the Left and then the Mamata Government in Bengal. He was critical of other social organizations too that were not doing enough. He risked his life every single day in the battlefield Bengal. He countered Love Jihad in Bengal with encouraging young Hindu boys to marry Muslim girls. He offered and provided protection to the families which did that. He firmly believed that until Hindu boys do not start taking Muslim women for wives and bear the brunt of it, the demographic changeover of Bengal in favor of Islam will not be stopped. He was enthusiastic about Ghar Wapsi and helped many Muslims to come into the Hindu fold once again.

He favored two ideas about Hindu society above all: unity and resistance. He felt that until the Hindus are divided into various sects working against each other, and until they are unwilling to put up a resistance then the tide will not be turned into their favor.

It is one thing to criticize radical Islam and formulate policies to fight it. But it is an entirely different matter when it comes to actually tackling them on real ground. Tapan Ghosh did just that. It is not very hard to recognize and say that Bangladeshi illegal immigration of Islamists in India is a reality and that it should not happen. In order to reverse that demographic change, one needs to get to the ground and face the ugly reality. Those who have infiltrated Indian borders and are aided and abetted by many Indian political parties along with their religious brothers in India are not going to give up easily. The bravery of Tapan Ghosh was that he did not just let theory be theory. He took the fight to battlefield and turned it into practice.

Though his battlefield was primarily Bengal he never lost sight of the bigger picture and spoke for the Hindu cause everywhere they were persecuted and discriminated against. Not only this he also favored pagan communities abroad which had great similarities with Hindus and which were under persecution, like the Yazidis of Iraq. He personified the adage of global thinking and local action.

He was a man of action. An activist for the Hindu cause deeply in touch with the ground realities. He remained a member of the RSS for many years and served with the Swayamsevaks to the Hindu cause. But in 2007 he left the organization. He still believed in the good work that the organization was doing and had good relations with many of its members, but he thought that its approach was too soft to make any significant difference in the ground situation in Bengal which was fast turning in favor of radical Islam with daily illegal migration of Bangladeshi Muslims in India, higher growth rate and active collusion of the state governments with the radical Islamic cause.

He believed in fast action, radical vision and an approach which did not just tow the theory but got results when put in practice. For this he created Hindu Samhati in 2008, an organization dedicated to his own vision of fighting the radical Islamic menace in Bengal and elsewhere. This organization worked on his vision for a decade. But he got disillusioned with its approach too and in 2018 abandoned his own organization. The reasons he cited were engagement in political activity beyond the scope of the task at hand. He believed that politics ruins action on ground as those who become politically aware start becoming cautious and soon lose sight of their real goal. He believed that a true activist has to remain independent of political desires all his life. He himself remained true to this dictum.

The special thing about Tapan Ghosh was that despite being a true activist he was always above organizations and believed in uncompromising work ethic even if it meant risking the ire of the organizational superiors. With or without organization, he kept working for the Hindu cause. Raising a lone voice at first, people started gathering around him and created a movement which lit the fire of Hindu Renaissance in Bengal.

May his memory, his life and his inspiration lit the fire of Hindu pride all over India and may we achieve what he dreamt about: a complete Hindu Renaissance.