Teesta Setalvad and the art of perjury 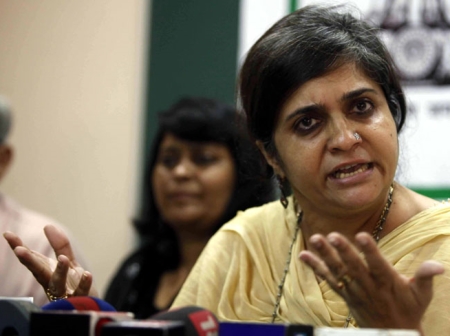 It seems Shashikant Patil, a convict in the Naroda Patiya incident during the 2002 Gujarat riots, who has been in jail for the 12 years was right in filing a case of perjury against Teesta Setalvad, of the NGO, Citizens for Peace and Justice (CJP).

For Rais Khan Pathan, a former colleague of Setalvad, alleged that Teesta prepared numerous affidavits without the knowledge of witnesses. Khan, who worked as field co-ordinator with the CJP from 2002 to 2008, filed an eight page affidavit before the Nanavati commission. In the affidavit, Khan said that payment to victims was not Setalvad’s priority, but paying the witnesses was important for her. While witnesses were paid between Rs. 50,000 and Rs. 1 lakh, many victims got only Rs. 5,000 each. “I used to take proper receipts from the victims and witnesses on plain paper,” he says.

Shashikant Patil approached the Supreme Court seeking prosecution of Setalvad on this very charge of perjury. Like Khan, Patil has accused Setalvad of procuring various false and fabricated affidavits to convince the Apex Court that investigation and trial in the matters referred to Special Investigation Team (SIT) was not proper and sufficient.  In the application, Patil states that Setalvad cooked up the story and, for instance, made an alleged rape victim of the riot to file a false affidavit before the Apex Court, which she denied in her statement before SIT on May 20, 2009, that she was raped.

He asserted that pertaining to the incidents of Naroda Gam and Naroda Patiya, six other persons filed affidavits having the “same language on November 15, 2003, making vague allegations of rape, mutilation and murder at the behest of Setalvad.”

“The respondent (Setalvad) has thus committed the offence of fabricating false evidence, which is a serious obstruction of justice and punishable under the aforementioned provisions,” the application said.

Patil sought investigation against her for offences punishable under Sections 192, 193,194 and 195 of Indian Penal Code.

Khan and Patil are not the only ones to accuse Teesta Setalvad of perjury: former CBI director R K Raghavan had told the Supreme Court that the celebrated rights activist made up macabre tales of wanton killings. “Many incidents of killings and violence were cooked up, false charges were levelled against then police chief P C Pandey and false witnesses were tutored to give evidence about imaginary incidents”, he had said in a report submitted before a Bench comprising Justices Arijit Pasayat, P Sathasivam and Aftab Alam.

The SIT itself, referring to the infamous Gulbarg Society case (police officer Pandey, instead of taking measures to protect people facing the wrath of rioters, has been accused of fuelling the mob), stated that the truth was that he was helping with hospitalisation of riot victims and making arrangements for police bandobast. Another report said that 22 witnesses, who had submitted identical affidavits before various courts relating to riot incidents, were questioned by the SIT which found that they had been tutored and handed over the affidavits by Setalvad and that they had not actually witnessed the riot incidents.

The SIT also nailed the following lies in these incidents widely publicised by Teesta Setalvad:

* A pregnant Muslim woman Kausar Banu was gangraped by a mob, who then gouged out her foetus with sharp weapons

* Police botching up investigation into the killing of British nationals, who were on a visit to Gujarat and unfortunately got caught in the riots

The SIT report said: “On a reading of the report, it is clear that horrendous allegations made by the NGOs were false.”

In addition Teesta’s web of lies has been exposed by:

* Headlines Today journalist Rahul Singh has alleged in an affidavit submitted to the Dy. Superintendent of Police, Lunawada that Teesta Setalvad did not tell him that the Pandarwada graves were legal. She did not inform him that she had not taken proper permission from the authorities to dig up the graves and that she knew that the bodies were buried by the police with proper procedure. (Link: http://www.scribd.com/dharmanext/d/83619014-Teesta-Setalved-withheld-truth-about-Pandarwada-graves-Headlines-Today-journalist )

What is surprising that all this while, the Indian media turned a blind eye to Teesta Setalvad’s lies, only highlighting the 2002 Gujarat riots, carefully omitting the fact that they were triggered by the cruel murdering of 57 Hindus, 36 of them innocent women and children, burnt like animals in the Sabarmati Express.

Teesta Setalvad keeps accusing the Gujarat police of ‘fake ecounters’. But she should know that the dreaded Khalistan movement in Punjab was quelled in the 80’s by super cop KPS Gill in a ruthless manner by a number of ‘fake encounters’ which killed top Sikh separatists. This was done under a Congress Government, both at the Center and in Punjab. Rajiv Gandhi was the Prime Minister then. Why was he never indicted?

Teesta Setalvad has unashamedly lied to the highest Courts of India, the media and the public. She seems to have perfected the Art of Perjury!